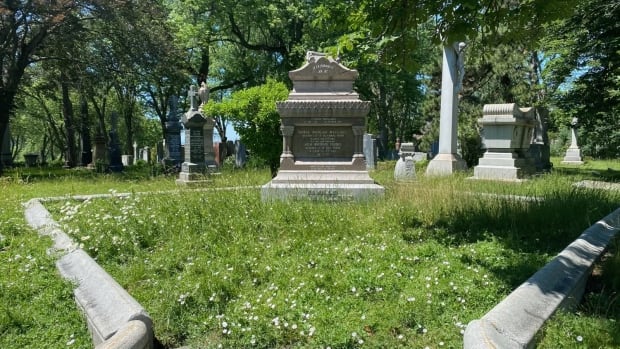 On Father’s Day, FredericCollin visited Notre-Dame-des-Neiges cemetery in Montreal to pay homage to his grandfather and late mother.

He was there the same day workers were protesting outside, claiming the job cuts left the land in a state of neglect.

Collin told CBC he noticed the decline in services from previous years.

“I’ve never seen it this way since… well, never.”

Patrick Chartand, vice-president of the union representing cemetery workers, said the workers no longer had enough staff to take good care of the grounds and graves.

Chartrand said employees hear complaints about the condition of the cemetery on a daily basis.

“There is a lot of anger because the grass is not cut,” he said. “Our customers are worried and angry and we understand.”

Chartrand said 26 jobs were cut in the past year, mostly in landscaping work.

Worse than tall grass, Chartrand says the cemetery has a well-known groundhog problem that sometimes results in bones dug up and flared around the cemetery surface.

His union is currently in contract negotiations with his employer, the Fabrique de la parish Notre-Dame de Montréal.

La Fabrique is a non-profit organization that oversees the Notre-Dame-des-Neiges Cemetery and the Notre-Dame Basilica in Montreal.

In a statement, the organization said the cemetery was operating with a cumulative operating deficit of $ 100 million.

Notre-Dame Basilica also has a deficit of 8.5 million dollars.

La Fabrique said in a statement that the figures were confirmed during an external audit and that the information was shared with all employees in November 2020.

“The operating losses for the cemetery come from the fact that expenses exceed income by about 40 percent each year on average. The cost of paying staff for operations and maintenance and customer service accounts for nearly 75 percent of the cemetery’s annual operating revenues, ”the statement said.

La Fabrique has confirmed that in March 2021, certain seasonal salaried positions will be abolished.

“All activities must be reviewed to reduce and eliminate annual operating deficits over the next few years to ensure the sustainability of the basilica and cemetery.