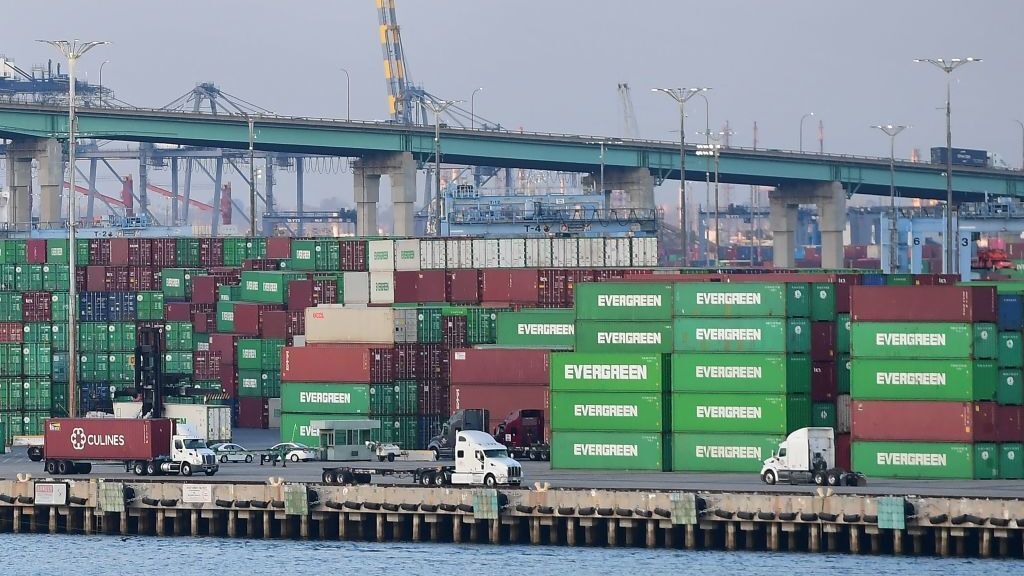 The containers are stacked in the Port of Los Angeles on September 28. A record number of freighters are stranded floating and waiting off the southern California coast amid a supply chain crisis the Biden administration hopes to alleviate.

The containers are stacked in the Port of Los Angeles on September 28. A record number of freighters are stranded floating and waiting off the southern California coast amid a supply chain crisis the Biden administration hopes to alleviate.

The White House said plans are in place to increase capacity at major California ports and major freight carriers, including Walmart, FedEx and UPS.

Biden announced that the Port of Los Angeles has agreed to essentially double its hours and move to 24/7 operations. In doing so, he joined the Port of Long Beach, which launched similar night and weekend shifts a few weeks ago.

Members of the International Longshore and Warehouse Union have said they are prepared to work additional shifts, according to the White House.

“This is the first key step,” said Biden, “to move our entire logistics and freight transportation supply chain nationwide to a 24/7 system.” .

Together, the two California ports handle about 40% of the container traffic that enters the United States.

Biden also touted the deals the White House brokered with private sector entities to get goods back on the air.

“Today’s announcement has the potential to be a game-changer,” Biden said. Noting that “the goods will not move on their own”, he added that major retailers and freight carriers must “also step up their efforts”.

Biden announced that three of the largest freight carriers Walmart, FedEx and UPS are taking steps to move to 24/7 operations.

Make all the links in the chain work together

Their commitment to launch 24/7 operations is “a big deal,” Transportation Secretary Pete Buttigieg told NPR’s Asma Khalid. “You can think of that as opening the doors. Then we have to make sure all the other players go through those doors, get the containers out of the ship so there’s room for the next ship, get those containers out there. where they need to be. It involves trains, trucks, so many steps between the ship and the shelves. “

Buttigieg said a White House meeting on Wednesday with retailers, shippers and port managers was “aimed at getting all of these players into the same conversation, because even though they are all part of the same supply chain , they don’t always talk to each other. That’s the purpose of this summons and why it’s so important. “

Regarding concerns about shortages of toys and other products in stores for the Christmas season, Buttigieg urged consumers to shop early, adding that retailers such as Walmart are pledging to “bring l ‘inventory where it needs to be, even in the face of things that are happening. “

This is the last step in supply chains

Supply chain issues are one of the many economic challenges facing the Biden administration. Job growth has also slowed sharply over the past two months. And forecasters have lowered their expectations for economic growth this year.

“Supply chain bottlenecks go from industry to industry, but we certainly know that port bottlenecks could help resolve what we’re seeing in many industries across the world. countries and frankly lead people who are getting ready for the holidays, for Christmas, whatever they may be celebrating birthdays to order goods and get them to people, “she said on Tuesday.

This is not the first time the administration has attempted to tackle supply chain issues.

Shortly after taking office, Biden signed an executive order launching a broad review of what products were missing, including semiconductors and pharmaceutical ingredients.

Biden created a task force over the summer to deal with the most urgent shortages, then brought in former Obama administration transportation official John Porcari to serve as the new “port envoy” to help move goods. Porcari helped negotiate agreements with the ports and the union.

The role of recovery aid

In a call with reporters on Tuesday night, a senior administration official brushed off concerns that direct payments from Biden’s relief law in March exacerbated the problems, fueling demand for goods and possibly discouraging be the necessary manpower.

The administration says the supply chain disruptions are global in nature, a challenge that has been compounded by the spread of the delta variant of the coronavirus. Biden reiterated this in his remarks on Wednesday, saying the pandemic has caused factories to shut down and disrupted ports around the world.

Two of the world’s largest ports in China have experienced partial closures aimed at curbing COVID-19 outbreaks, the White House notes. And in September, hundreds of factories closed due to lockdown restrictions in Vietnam.

The administration agrees that part of the current problem is related to increased demand, but sees it as a positive indicator of how the United States has recovered from the pandemic faster than other developed countries.

As for the effects on labor supply, the official said it was more complicated.

Direct stimulus payments and additional unemployment benefits were a “lifeline” for many struggling families, the administration official said.

“And to the extent that it allows people to think more about when, how and what offer they choose to reconnect to the job market, it is ultimately very encouraging,” added the official.