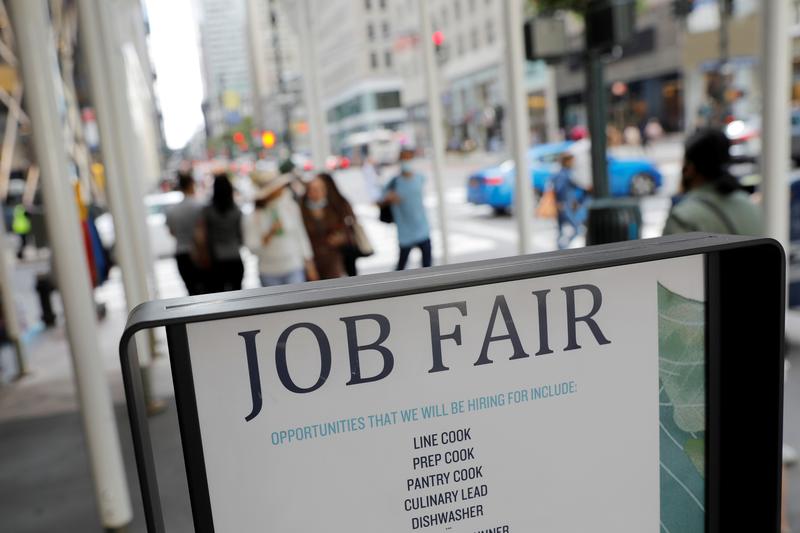 WASHINGTON (Reuters) – The number of Americans filing new jobless claims fell below 300,000 last week for the first time in 19 months, further evidence that a shortage of workers was behind slower employment growth rather than weaker demand for labor.

With the second consecutive weekly drop reported by the Labor Department on Thursday, initial demands are now in the area typically associated with healthy labor market conditions. But the labor market faces problems of labor and commodity shortages, which are fueling inflation.

The data supports the narrative that companies are increasingly reluctant to lay off workers due to a severe supply shortage, said Rubeela Farooqi, chief U.S. economist at High Frequency Economics at White Plains, New York. But it is still unclear whether the expected supply surge that did not materialize in August and September will continue.

Initial claims for state unemployment benefits fell from 36,000 to 293,000 seasonally adjusted for the week ended October 9. It was the lowest level since mid-March 2020, when the country was at the start of the COVID-19 pandemic.

There have been declines in unadjusted claims in Florida, Texas and Tennessee. Requests have increased in California, Kentucky, Maryland, Missouri and Michigan. Part of the rise in Michigan was likely due to some automakers’ assembly lines idling due to a global chip shortage.

Economists polled by Reuters had forecast 319,000 claims for last week. Last week’s drop was the biggest since the end of June. A range of 250,000 to 300,000 claims for benefits is considered consistent with a healthy labor market. Claims have declined from a record 6.149 million at the start of April 2020.

The government announced last Friday that the non-farm payroll increased by just 194,000 jobs in September, the least in nine months. The slowdown in job growth is mainly due to a shortage of workers as well as a skills mismatch, with government data showing Tuesday there were 10.4 million job vacancies at the end of August.

Wall Street stocks were trading higher. The dollar fell against a basket of currencies. US Treasury prices were mixed.

More and more people are falling off the state’s unemployment lists, indicating a strong demand for labor. The number of people continuing to receive benefits after a first week of aid plunged from 134,000 to 2.593 million in the week ended October 2, also the lowest level since mid-March 2020.

The total number of people receiving unemployment checks under all programs fell from 523,426 to 3.649 million in the week ended September 25. This reflected the expiration of federally funded unemployment benefits last month.

Labor shortages, caused by the COVID-19 pandemic, are also prevalent in other advanced economies, clogging supply chains. There is hope that more Americans will join the workforce, with coronavirus infections driven by the Delta variant on the decline, schools fully reopened for in-person learning, and expanded benefits expired.

But amid rising self-employment and massive savings along with early retirements, thanks to a strong stock market and record hikes in house prices, the labor pool may remain. weak for a while. Labor shortages are plaguing the supply chain as there are fewer workers to produce raw materials and goods as well as to ship them to markets, fueling inflation.

In another report released Thursday, the Labor Department said its producer price index for final demand rose 0.5% in September, the smallest gain in nine months, after rising 0.7 % in August. Economists had forecast the PPI to gain 0.6%.

A 1.3% jump in goods prices explains nearly 80% of the increase in the PPI. Goods prices, which advanced 1.0% in August, were boosted by energy products such as gasoline, residential electricity and gaseous fuels.

The price of Brent crude has exceeded $ 80 a barrel. Electricity and natural gas prices have also increased, indicating that energy costs may remain high.

Wholesale feed prices increased 2.0%, led by beef. Services advanced 0.2%, as an 11.6% increase in retail fuels and lubricants margins were partially offset by a 16.9% drop in airline tickets. There were also increases in the wholesale prices of machinery and equipment, motor vehicles and their parts, and freight transportation by truck.

In the 12 months ending in September, the PPI accelerated 8.6%, the strongest year-on-year gain since November 2010, when the series was revamped, after jumping 8.3% in August.

The report followed Wednesday’s announcement of a solid increase in consumer prices in September, driven by sharp increases in food and rents as well as a range of other goods.

The minutes of the Federal Reserve’s September 21-22 policy meeting released on Wednesday showed that some U.S. central bank officials feared that high inflation rates would spill over into long-term inflation expectations for consumers. households and businesses.

But producer inflation could approach its peak. Excluding the volatile components of food, energy and commercial services, producer prices rose 0.1% last month after gaining 0.3% in August. In the 12 months to September, core PPI rose 5.9% after accelerating 6.3% in August.

Health care costs rose 0.2% and portfolio management costs jumped 1.2%. With airline tickets, health care and wallet fees fueling the basic personal consumption expenditure price index, the Fed preferred the measure of inflation for its flexible target of 2%. With CPI and PPI data in hand, economists estimate that the core PCE price index rose 0.1% in September, which would keep the year-on-year increase at 3.6%.

There is no doubt that producers are grappling with supply chain issues and labor shortages, so it is too early to call the relatively small increases in baseline PPI the forward sign- runner of a new trend, said Will Compernolle, senior economist at FHN Financial in New York.

Moto G Pure: Three things I like about Motorola’s $ 160 phone