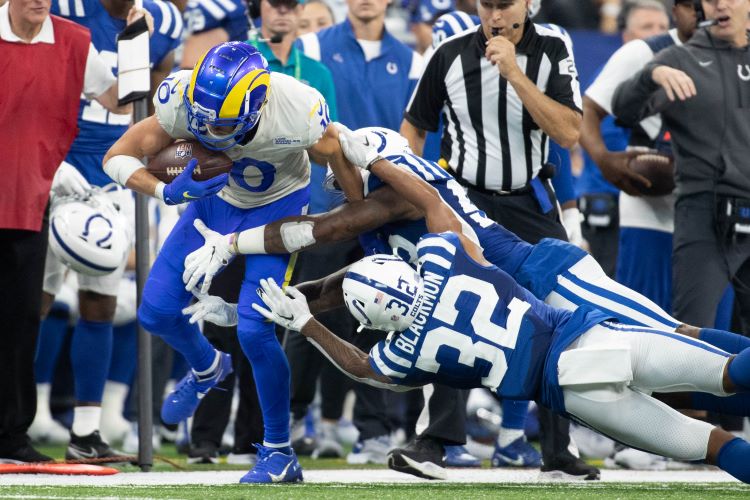 Months after starting a historic partnership with the NFL, Genius Sports credited the landmark deal with the nation’s most important sports league for surpassing key revenue targets in recent months.

In its third quarter 2021, Genius Sports generated revenue of $ 69.1 million, the highest figure on record for the period, Genius said in a statement Tuesday. Genius Sports, a global sports betting data and technology company, grew quarterly revenue by more than 70% on an annual basis, which the company attributed to “well-balanced growth” across all of its segments activity.

The good quarter from a revenue perspective, however, was tempered by a volatile trading session on Tuesday. During Tuesday’s pre-market session, Genius initially jumped 5% on the high income numbers. Shortly after 1 p.m., however, Genius shares had plunged more than 30% to $ 9.31, falling to all-time lows.

Genius also reported a loss in net earnings per share of minus $ 0.37, analysts’ forecasts missing minus $ 0.12. The company reported adjusted (non-GAAP) EBITDA of minus $ 0.4 million as revenue growth was offset by strategic investments and data rights costs, according to Genius.

About 97% of the U.S. market was using official NFL data exclusively through Genius Sports on Tuesday, the company said in a presentation of third quarter results. Genius provides official NFL betting data to industry heavyweights DraftKings, BetMGM, and Caesars Entertainment, as well as PointsBet, WynnBet and Barstool Sports, among other major sports betting companies.

“The growth of Genius Sports is accelerating to an unprecedented level that far exceeds our initial expectations,” said Mark Locke, CEO of Genius Sports. in a report. “We’re capturing more opportunities than ever, thanks to the widespread adoption of official data across the ecosystem. “

As part of the April deal, Genius also became the exclusive distributor of the league of proprietary data Next Gen Stats (NGS), which tracks advanced stats such as a player’s top speed on a given game. At its booth at last month’s Global Gaming Expo in Las Vegas, Genius displayed Titans wide receiver Julio Jones’ career-highest top speed of 24.8 mph, as well as examples of in-game accessories on Jones.

Ultimately, Genius hopes to enrich the viewing experience in stadiums beyond sports betting with its technological capabilities.

“Our goal is to create a business that takes over a portion of sports-related transactions on a global scale, be it betting, ticket sales, live streaming, purchase. hot dog at a stadium or a jersey sale, ”Locke said. “Genius exists to provide the technology platform that both powers these transactions and enables true fan monetization on a global scale. “

My Football / GSIS team congratulate you guys – @kevgeek @johncave @nstamata and Andrew Kirby. You make the world go round with this! https://t.co/g1mZS7SYLV

Marked differences between the NBA and NFL agreements

Addressing last week’s long-term partnership between the NBA and Sportradar, Genius Sports OCC Jack Davison admitted the company “would have been delighted” to land the deal with the NBA. As part of this partnership, Sportradar will serve as the exclusive provider of NBA global betting data to international sports betting operators. The deal, which takes effect from the 2023-24 NBA season, grants the league a 3% stake in Sportradar.

When it comes to US-based sports betting, the NBA is moving away from an old, non-exclusive model of data distribution, a source close to the deal said. Sport gripLast week. Currently, Sportradar and Genius have non-exclusive data partnerships with the association. The new deal gives Sportradar a “greater degree of exclusivity,” while giving the NBA some flexibility to work with others in the space to facilitate innovation, the source explained.

Davison, however, questioned the benefit of some aspects of this new NBA deal. While the NFL partnership gives Genius perks in the media space, along with a considerable amount of advertising inventory and other valuable assets, those perks weren’t on the table with the NBA. according to Davison. This is in part because some of those assets are stranded as part of a joint venture between the NBA and Turner Sports, he said.

More importantly, Davison noted that the company understands that the NBA will continue to maintain a direct relationship with all downline sports betting operators, even though the books are subject to charges for data rights. As a result, Genius believes the deal is structured so that the NBA takes a “part of the treatment” directly from sports betting, Davison said.

“From our perspective, it was like the operators were billed twice,” Davison said, once for the data and once directly from the NBA.

Genius topped the Wall Street consensus revenue forecast of $ 62.8 million by over $ 6 million with the pace of revenue. Looking ahead to the company’s quarterly earnings conference call at 8 a.m. ET, shares of Genius rose to $ 14.35, reflecting the increase in revenue generated by sports betting business partnerships with the NFL.

Genius stocks then went into free fall over the following hours, wiping out all of their gains over the past 12 months. Tuesday’s liquidation could present a buying opportunity for institutional investors and exchange-traded funds (ETFs). The ETF ARK Invest of Cathie Wood, a leading investor bought more than 550,000 shares from Genius on November 2, a day the company closed at $ 18.70 a share. At the close of the session, the purchase was valued at approximately $ 10.4 million.

$ GENI I doubled my position here. Unless I missed the memo, Congress has yet to ban gambling.

Genius hit a high of $ 24.98 in May, weeks after the company’s public debut on the New York Stock Exchange.

Sports betting stocks, in general, have fallen significantly over the past month. The Sports betting ETF and iGaming Roundhill (BETZ) traded around $ 26 per share on Tuesday, down 3% on the session. The exchange-traded fund, which tracks stocks related to games and sports betting, has fallen more than 15% since October 26.

During that time, DraftKings fell 25%, while MGM Resorts fell about 10%. Penn National Gaming, which lost a lucrative mobile sports betting license offer in New York City this month, has plunged 30% since the end of October.

Notre Dame is ranked No. 6 in the latest college football playoff rankings