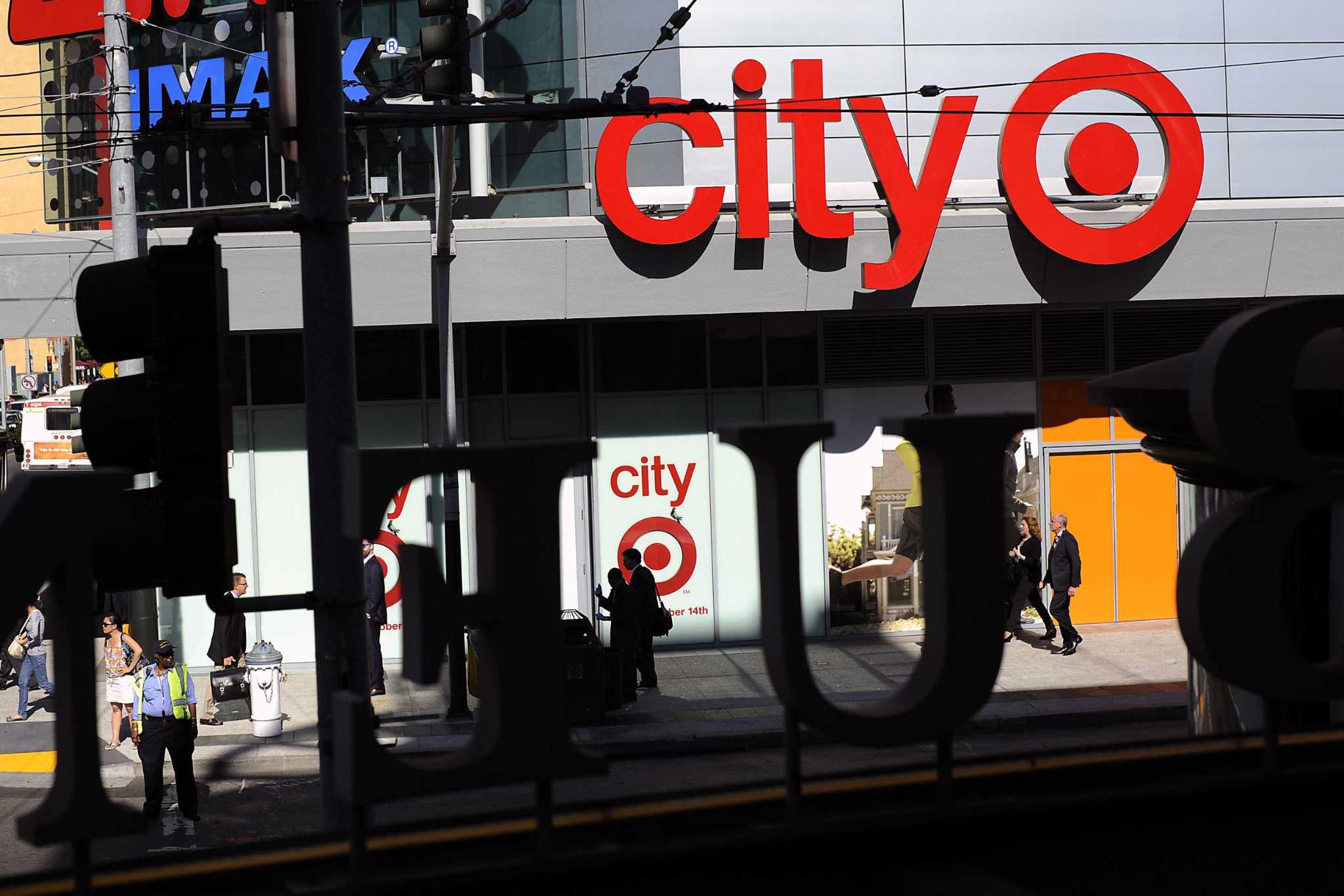 As San Francisco remains trapped in a heated debate over how best to respond to crime, shoplifting has become one of the hotspots of the battle, dividing people along strong political lines. But crime experts say the data needed to accurately measure shoplifting is woefully inadequate.

There is no better example of the problem than the shoplifting data kept by the San Francisco Police Department.

As of January 2018, reported shoplifting incidents are relatively constant at around 250 per month; they drop sharply when the pandemic begins, then start to slowly increase as the city reopens. And then in September 2021, they inexplicably double.

A closer look at the data shows that the spike in reported shoplifting is almost entirely attributable to one store: the Target at 789 Mission Street in the Metreon Mall. In September alone, 154 shoplifting reports were filed at the southern intersection of Market where Target is located, up from 13 in August. And then, in October, the reports from that intersection went down to 17.

What happened to this particular target? Did the store experience a massive spike in shoplifting in September? No, said store manager Stacy Abbott. The store was simply using a new police reporting system that allows retailers to report criminal incidents over the phone.

When asked why reports of shoplifting declined again in October, Abbott said she would no longer be able to answer questions and directed The Chronicle to the police department as well as the Targets media team, who also did not answer questions.

Police spokesperson Officer Robert Rueca said the new reporting system was available to other businesses and individuals on weekdays, not just the target. He did not respond to questions about how long the system had been in place or whether the department had seen an increase in shoplifting incidents in other stores since the system was implemented (the data available to the public do not show such an increase).

Although the observed spike in the data generates more questions than answers, one thing is clear: The decision of a single store (albeit large and busy) to report the majority of its shoplifting incidents has doubled. monthly shoplifting rates for the entire city.

The lack of clear data means that the debate over issues like shoplifting is not based on clear facts, allowing either side of the divide to say they are right.

People alarmed by shoplifting, including leaders of large retail associations like the California Retail Association, say crime increased dramatically during the pandemic, leading to a wave of store closings across the city. They report stores are cutting back hours and company spokespersons say shoplifting and the need for security have increased, and they refer to incidents such as the mass robberies last Friday at Louis Vuitton and other high end luxury goods stores.

They argue that police data will always be inaccurate because in a city that has historically struggled with high property crime rates, store workers do not witness or report most incidents. And they say leniency in the criminal justice system plays a role, with stores dropping reporting because they think people aren’t going to be punished anyway.

But on the other side, there are people who question whether the depictions of burgeoning shoplifting are accurate, and fear that these depictions could spark fear and strict policies that set aside necessary reforms. of criminal justice.

People like Supervisor Dean Preston and Mayor London Breed tend to question the accounts of larger retailers. They point out that large companies announcing store closures, like Walgreens, have announced that they will soon be closure of hundreds of stores in 2019, before the pandemic. These stores have been beaten by the wave of e-commerce.

They note that the pandemic may have resulted in reduced foot traffic in these stores and therefore reduced profits. And they’re referring to police data, which shows reports of shoplifting and theft have declined during the pandemic.

While both sides have plenty of reasonable-sounding anecdotes and arguments, neither can provide reliable data on actual shoplifting rates in the city, as there are none, Read Hayes said, criminologist at the University of Florida and director of the Loss Prevention Research Council.

There isn’t a big source (of shoplifting data), Hayes told The Chronicle.

Police data, he said, is particularly flawed, as most retailers are reluctant to call law enforcement or detain shoplifters for a number of reasons, including because ‘They do not believe that offenders will be charged and that they are concerned for their own safety and legal responsibility if they intervene.

Stores keep their own data on inventory and loss, and Hayes said it was a better source than police data. But the store data is still not perfect, as expected inventory can be lost for any number of reasons, an employee may steal something, or a shipment may never arrive at the store. Additionally, Hayes said individual retailers tend to be reluctant to share their data publicly.

Walgreens, CVS, and Target have not responded to repeated requests for The Chronicle’s shoplifting data, other than the more aggregate stats.

Mike DeAngelis, spokesperson for CVS, said the store has seen a 300% increase in retail thefts from our stores since the start of the pandemic, but did not provide specific information about stores in San Francisco. He also said that CVS loses $ 200 million annually due to organized retail crime, which is less than 0.1% of CVS’s annual turnover of $ 268 billion.

At the now closed Walgreens at 300 Gough St., the site of a viral video that showed a person riding a bicycle, with a trash bag containing stolen items hanging from the handlebars, store managers advised security guards to avoid encounters with shoplifters; and report thefts to their supervisors rather than the police.

This just happened at @Walgreens on Gough & Fell Streets in San Francisco. #No Consequence @chesaboudin pic.twitter.com/uSbnTQQk4J

The policy is not to confront, arrest or engage with shoplifters, said security officer Emmanuel Robertson, standing near the main entrance to Gough’s nearly empty pharmacy Street on a rainy October afternoon.

By then, workers had evacuated produce from several aisles, preparing for the store to shut down for good the following month in the string of closures Walgreens blamed on widespread theft.

Walgreens, they don’t want any incidents, Robertson said, noting that some people committing theft are presumed to have guns and companies don’t want to be held accountable if a contract guard is injured in an altercation.

Robertson also expressed a sense of unease, venturing that the police are unlikely to come to investigate a shoplifting report, and even if they do, they are unlikely to arrest anyone.

Chris Phipps, property manager for the Gough Street store from 2012 to 2020, said thefts occurred on a daily basis. He went there two or three times a week and regularly observed people throwing things into bags.

The security guard would tell them to stop as they exited, Phipps said, noting that security officers had been told they could not physically restrain the person.

In a statement, Target spokesperson Amy Tew said: “Over the past few months we have seen a significant and alarming increase in thefts and security incidents at our San Francisco stores, similar to reports by other retailers in the region. Target engages local law enforcement, elected officials and community partners to respond to our concerns. With the safety of our customers, team members and communities being our top priority, we have temporarily reduced our hours of operation at five stores in San Francisco.

For aggregate retailer information, Hayes reported the National Retail Security Survey, or NRSS, an annual survey conducted by the National Retail Federation. The NRSS polls dozens of retailers about issues affecting their inventory, including store inventory reduction or rate of reduction, which is the portion of listed inventory that does not appear in actual stores inventory.

The authors of the polls noted the 1.62% figure seen in fiscal 2019 was an all-time high, and this organized retail theft has been a serious problem for retailers, with average losses reaching $ 700,000 per $ 1 billion in sales for all retailers (less than 0.1%.)

The study did not cite how much of the latest shrinkage rate would be due to shoplifting. But in previous polls, retailers reported that shoplifting accounts for just over one-third of the shrinkage rate, with employee theft making up another third.

According to Hayes, there is no similar survey data on shoplifting trends in San Francisco. The NRSS ranks cities based on their impact on what the report calls organized retail crime, which tends to refer to multiple people shoplifting in substantial amounts. For fiscal year 2020, the San Francisco-Oakland metropolitan area ranked second, behind Los Angeles.

The school in Orleans was closed due to COVID-19