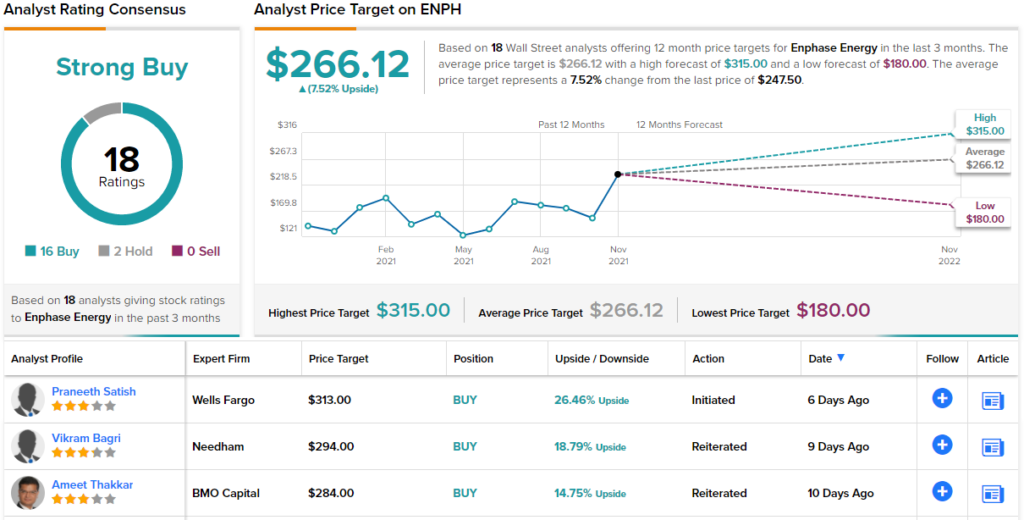 We were at the start of a long-term change in the global economy. Public opinion and also, to some extent, the human desire to survive promote green technologies and green industry, and pave the way for the future of energy production. We don’t have a crystal ball, so we can’t see the full shape of things to come, but in recent months investors have turned to solar stocks.

While supply chain bottlenecks and labor shortages impact the solar energy industry, these issues are not specific; they affect the economy in general. Several industry-specific factors, however, are putting the tailwinds behind the solar scene.

First of all, there is a strong demand for solar energy, as well as its ancillary equipment and infrastructure. Basically, this is the key factor. Demand ensures that there is a market.

At the regulatory level, two legislative acts act to support solar energy. Passage of the infrastructure bill earlier this month was a major catalyst, as the over $ 1 trillion bill includes significant funding for the solar energy sector. This was followed by the passage by the House of Representatives of a version of the Presidents Build Back Better bill. BBB, as it is called, comprises a broader set of pro-green policies; investors are now waiting to see if the bill can be headed for passage in the Senate.

In the meantime, the solar industry has rallied around these points and investors are leaning longer on several solar stocks. Wells Fargos analysts reported two companies involved in the production of microinverters, a key component of solar power units, and noted how they would benefit from the current situation. We used the TipRanks platform to pull the details on the choices of companies.

Well, start with Enphase. The company manufactures solar microinverters, the equipment that converts direct current (DC) produced in a photovoltaic solar panel into alternating current (AC) that can be used in existing power transmission systems. Enphase is the market leader in the production of inverters, thanks to its pioneer advantage; it was the first company to commercialize the production of inverters on a large scale.

Last month, Enphase saw two major catalysts for stock prices. First, the company announced the launch of its new IQ8 microinverter, the most advanced version of the technology on the market. The IQ8 device is smart and, according to the company, is able to form its own micro-grid and provide back-up power during an outage using only direct solar power, it does not require a battery during the shutdown. daytime. This latest generation of micro-inverters is the first micro-grid version on the market.

The second catalyst was the 3Q21 earnings report. Enphase posted record revenue of $ 351.5 million, revenue was up 96% year-on-year. EPS was also strong, at 60 cents per share on net income of $ 84.2 million. EPS was double the value of a year ago. Generally, investors applauded the company’s performance in 2021; stocks are up 41% year-to-date.

Fargos well Praneeth satish think stocks have more room to run. The analyst launched his hedge here with an overweight rating and a price target of $ 313, which implies a 26% year-over-year increase. (To look at Satish’s track record, Click here.)

Satish writes: We believe ENPH is expected to benefit from a number of long-term favorable winds in the solar market including (1) continued expansion of residential and commercial solar market, (2) battery connection rates higher over time, and (3) decentralization of energy production. ENPH has two key competitive advantages that should support the visibility of growth: (1) the NEC 2017 regulations, which create barriers to entry into the US market; and (2) product innovation and software technology, which provide customers with an intelligent home energy management system.

There are no less than 18 reviews of this stock by the Wall Street analyst body and 16 of them recommend buying, going above the 2 taken for a strong buy consensus rating. Stocks don’t come cheap; they’re priced at $ 247.5, and the average target of $ 266.12 points to a modest 7% gain over the coming year. (See the analysis of ENPH shares on TipRanks)

Wells Fargo’s second well-reviewed choice is SolarEdge, a primary competitor of Enphase. Like the largest company, SolarEdge produces microinverters. In addition, this Israel-based company also develops and markets other necessary components of solar energy systems, including power optimizers and monitoring systems. SolarEdge operates in the global market and has offices in Germany, Italy, Japan and the United States.

As a smaller competitor, with a market capitalization roughly half that of Enphases, SolarEdge must differentiate itself to survive in a fierce market. Where Enphase focuses on microinverter technology, SolarEdge has diversified to a greater extent. This company manufactures high-end inverters, but it also produces energy storage solutions for household and commercial applications. These products are designed to maximize the efficiency of solar energy installations, to increase the energy independence of customers and to reduce long-term electricity bills.

At the end of October, SolarEdge announced that its Energy Bank battery systems and Energy Hub inverters are now available in North American markets. The battery leads the industry with 94.5% round trip efficiency, while the hub provides over 10kW of back-up power in the event of a grid failure.

In line with those comments, Blum sets an overweight (buy) rating here, along with a price target of $ 441 suggesting a 31% rise over the next 12 months. (To look at Blums’ charts, Click here)

This moderate buy consensus rating is based on 19 reviews, broken down into 15 purchases, 3 takes and 1 sale. The current trading price is $ 336.8 and the average price target of $ 379.35 implies a 13% year-over-year rise from this level. (See the analysis of SEDG shares on TipRanks)

To find great ideas for solar stocks traded at attractive valuations, visit TipRanks Best stocks to buy, a recently launched tool that brings together all the information about TipRanks shares.

Disclaimer: The opinions expressed in this article are solely those of the analysts presented. The content is intended to be used for informational purposes only. It is very important to do your own analysis before making any investment.

Google Pixel 6: The cheapest way to get in Australia on this Black Friday