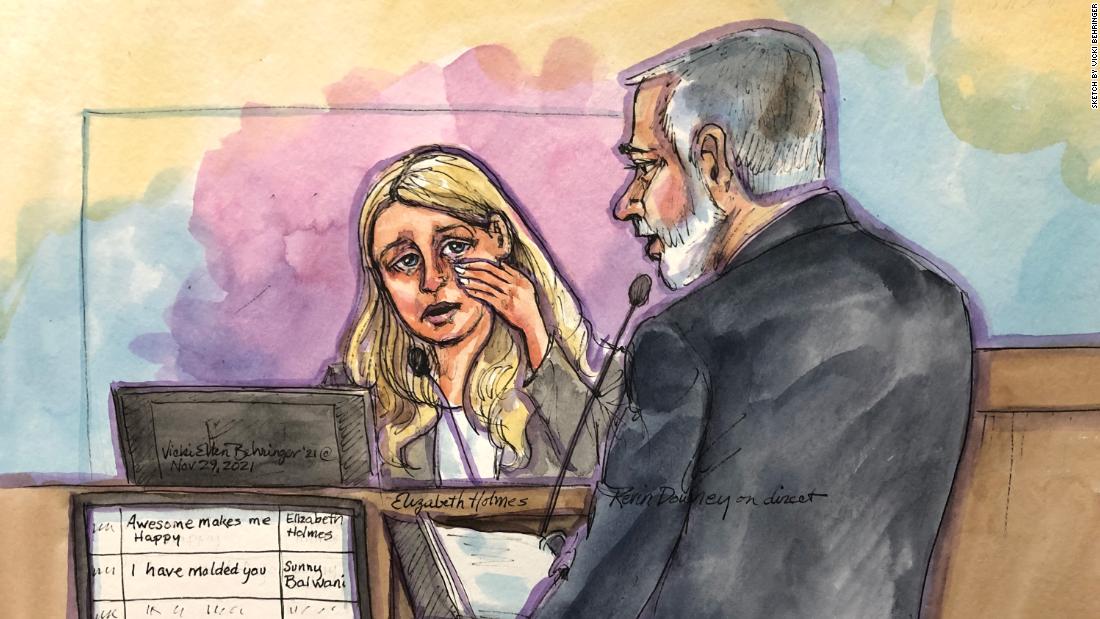 In a moving moment during his fourth day at the helm of his criminal fraud trial, Holmes disclosed her sexual assault in college and said she stopped attending classes afterwards. Holmes said she left to focus on building her business instead.

“I was wondering how I was going to be able to handle this experience and what I wanted to do with my life, and I decided that I was going to build a life by starting this business,” she said.

Holmes testified that she later started a professional relationship which turned romantic with a former software manager Ramesh “Sunny” Balwani, who would go on to become the COO of Theranos while they were dating. She first met him in China after graduating from high school at the age of 18 and he was 38. When she later revealed to him the trauma of her rape at Stanford, she said. testified: “He said I was safe now that I had met him.”

Holmes then described how Balwani trained and controlled her, criticizing everything from the tone of her voice at meetings to being too feminine and behaving “like a little girl.”

“He told me that I didn’t know what I was doing in business, that my beliefs were wrong, that he was amazed at my mediocrity,” she said, adding that he told her that “I needed to kill the person I was.” to be successful.

Holmes also alleged that Balwani “would get very angry with me and then he would go up to our room sometimes and force me to sleep with him when I didn’t want to, because he said he wanted me to know it. that he still loved me. “

In unsealed court documents before the trial, Holmes’ legal team had signaled that the former CEO of Theranos was likely to defend herself by claiming that she had been the victim of a ten-year abusive relationship with Balwani. Balwani’s lawyers have denied the allegations.

Holmes’ testimony potentially gives jurors, through his own words, a glimpse of his state of mind at the time of the alleged fraud. According to legal experts, one of the most difficult things in fraud cases is to prove intent.

Holmes and Balwani have been charged with the same federal fraud charges over allegations that they knowingly misled investors, doctors and patients about Theranos’ blood testing capabilities in order to take their money. Both have pleaded not guilty and face up to 20 years in prison.

Their trials were halted after Holmes indicated that she could claim that she had been the victim of a psychologically, emotionally and sexually abusive relationship and that, due to the nature of their relationship, she believed what she was told. said of the company’s technology and its business relationships. Balwani’s trial is expected to begin early next year.

In his previous testimony on the witness stand, Holmes admitted some of the prosecution’s most damning allegations while offering alternative explanations. She has tried to cast doubt on her intention to deceive a key part of what federal prosecutors seek to prove. She also shifted the responsibility onto others by simply naming who held certain roles in the company.

Holmes testified at length on Monday about how Balwani shaped the way she approached her business and how she ultimately lost confidence in him.

Balwani told her that if she wanted to become a successful entrepreneur, she had to devote all of her time to the business and only do things that could contribute to the success of the business. It meant, she testified, not to get much sleep, to eat only foods that “would make me clean.” Holmes’ attorney presented Balwani’s handwritten notes to Holmes.

In a note, Balwani said, “Every morning I will force myself out of bed and spend over 30 minutes (never a minute less) writing down what I want out of my day.” In other notes, Balwani said that Holmes mismanaged his meetings: “I will always give clear and clear goals and comments to my subordinates, even if they don’t like him, especially if they don’t like him. not.”

“He taught me everything I thought I knew about business and I thought he was the best businessman I know,” she said. “I don’t think I questioned him like I would have done otherwise.”

Holmes said that view had changed following the findings of the 2015 inspection by the Centers for Medicare and Medicaid Services which would result in the revocation of the license of its blood testing center in California and the ban on Holmes. to run a laboratory for two years.

Balwani oversaw the lab, and Holmes testified that she believed Theranos had one of the best labs in the world.

Balwani left the company in May 2016. Holmes was living with him at the time but did not continue his personal relationship with him after his departure from Theranos. Holmes said her brother helped her move while Balwani was in Thailand.

After detailing Balwani’s influence, Holmes’ attorney asked him if Balwani had forced her to make statements to investors, retailers, administrators and reporters jurors had heard about during this case. Holmes testifies “no” to all.

His lawyer asked what impact, if any, has Balwani had on your work at Theranos, in your opinion? “I don’t know. It impacted everything I was and I don’t fully understand it.”