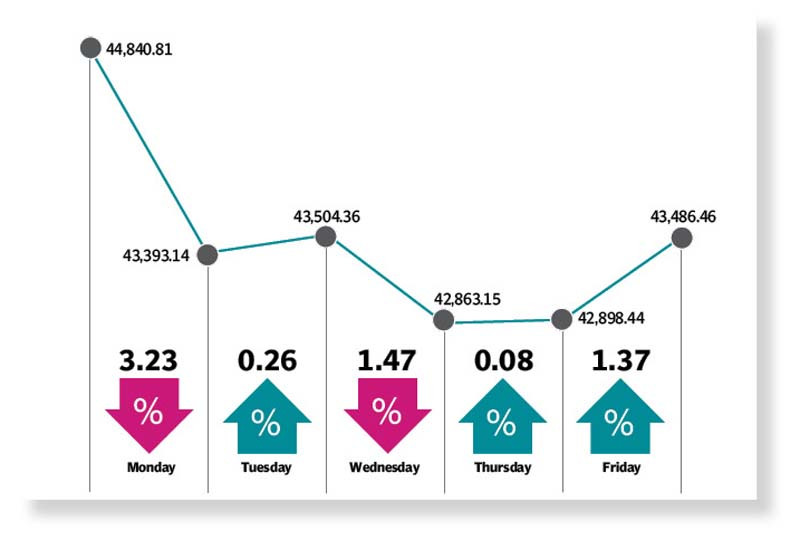 
The Pakistan Stock Exchange had a lackluster week of trading as jittery investors scrambled to find positive signals amid continued deterioration in macro indicators.

The continued decline of the Rupee to record highs against the US Dollar and the depletion of foreign exchange reserves have haunted the trading environment over the past week, keeping market participants at bay.

“The decline can be largely attributed to the depletion of foreign exchange reserves and the lack of clarity on the government’s intention to implement the request of the International Monetary Fund (IMF) on which the revival of the Extended Financing Facility (EFF) depends. ),” a report from Topline Securities said.

Additionally, “Saudi Arabia’s lukewarm response to an official delegation from Pakistan, where the kingdom reportedly tied an additional $3 billion in support to the relaunch of the IMF program, further dampened investor sentiment,” it said. he added.

The outgoing week started on a bearish note as the benchmark KSE-100 index plunged around 1,448 points on the very first day of trading.

Investors were seen rushing to unload their positions at all levels due to the continued deterioration in macroeconomic signals.

However, the following session saw some recovery, albeit in range bound trading activity. Market participants were seen looking for value in stocks that had fallen to attractive valuations due to the “bloodbath” seen the day before.

As a result, the KSE-100 index managed to add around 111 points on Tuesday.

The recovery trend, however, reversed again on Wednesday as skeptical investors tried to find positive signals amid domestic political turmoil.

The fall in the rupee, which was hovering around all-time lows, continued to weigh on market participants’ interest, causing the benchmark to fall a further 641 points.

The past two trading days have seen some recovery on the back of attractive stock value hunting, in addition to news of the highest ever inflows in April 2022.

Record remittances reignited investor interest as they continually sought some positivity on the economic front.

Lily PSX drops over 1,000 points amid political and economic uncertainty

They even played down the further depreciation of the local currency which settled at an all-time low against the US dollar on Friday, and resumed stock picking.

The last two days of the outgoing week added 623 points, helping the index recoup some of the losses.

“We believe clarity should emerge next week on some economic policies, which should help stock market sentiment,” said a report from Arif Habib Limited.

“It appears that the government is considering removing the fuel and electricity subsidy to gain IMF approval, which will be a positive sign for the market,” the report said, adding “once the package is adopted , other sources of foreign exchange should also open such as support from friendly states as well as the Asian Development Bank (ADB)”.

In terms of sectors, the positive contribution came from sugar and related industries (9 points) and miscellaneous (1 point).

Overseas sales were seen over the past week, which amounted to $1.88 million, compared to net purchases of $2.01 million in the previous five sessions. Significant sales were seen in commercial banks ($1.6 million) and cement factories ($1.4 million).

On the local front, purchases were reported by banks ($16.3 million), followed by other organizations ($1.5 million).

Published in The Express Tribune, May 15and2022.

Mohamed bin Zayed, a quiet force to lead the UAE as a regional player

From the United States, Jokowi stops in Abu Dhabi to express his condolences for the passing of the President of the United Arab Emirates