TOKYO – Investors who anticipate a recovery from the coronavirus pandemic are doing good business in Japan – propelling the country’s stock market to levels last seen nearly three decades ago.

The blue chip Nikkei Stock Average has soared, jumping over 2,500 points, or 11%, since the end of October. Last week it hit 26,014, a level not seen since May 1991, following the collapse of the asset price bubble in Japan.

Slight corrections have hit the market in recent days as investors take a break. However, many expect a sustained rise in the longer term, with a global economic rebound expected to benefit Japan’s export-oriented economy.

“The market structure of the old Japanese economy is likely to benefit from the global economic recovery,” said Masafumi Oshiden, head of Japanese equities at BNY Mellon Asset Management in Tokyo.

The Nikkei Index has outperformed other major global benchmarks in the time since mid-February, before the COVID-19 panic brought down global stock markets. In the United States, the Dow Jones Industrial Average is up 2%, while the Hang Seng Index in Hong Kong is in negative territory.

Investors turned bullish after a positive news flow, including a rebound in Japan’s gross domestic product from July to September, which rose 5% from the previous three months and rose at an annualized pace of 21.4% , exceeding expectations. 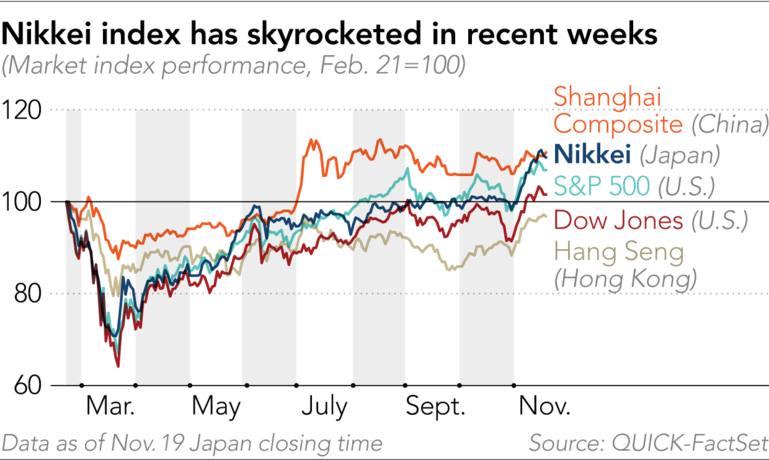 Progress in COVID-19 vaccine development by drugmakers Pfizer and Moderna has also bolstered stocks in Japan, offering hope the world can start to return to normal.

Along with the Nikkei index, the larger Topix index, made up of more than 2,000 Japanese companies, has jumped 9% since the end of October. However, the Mothers Index for startups was less bullish, climbing 2.3%.

Ryutaro Kono, chief economist of Japan at BNP Paribas in Tokyo, indicates in a report the possibility that other pharmaceutical and biotech companies will soon report successful clinical trials and the positive effects they would have.

“This will increase confidence that the coronavirus can be controlled, and lead people to believe that enough will be produced to supply countries around the world,” Kono said, adding that the vaccine news “will provide a strong incentive for companies to increase investment in capital and inventory and]encourage consumers to reduce precautionary savings. “

Bank of America’s November survey of fund managers found that more than 90% of respondents said the economy will be stronger in the next 12 months, while a net 24% s He expects value stocks – those that trade below what the company’s performance suggests – to outperform growth stocks.

Strong demand for Japanese equities prompted large securities companies to rethink their view of the market. Goldman Sachs has raised its outlook for the Nikkei index and estimates the benchmark will climb to 27,200 over the next 12 months as the economic recovery and improving corporate earnings provide a tailwind.

Japanese companies have just completed their second quarter earnings announcements, with many exceeding analysts’ expectations. A report from Okasan Securities shows that the companies making up the benchmark Topix index posted a 15% drop in net income in the second quarter, a major improvement from the 57% drop in the first quarter. Some companies have increased their annual forecasts. Shares of companies such as Honda Motor, ANA Holdings and East Japan Railway, all of which have price-to-book ratios of less than one, saw a boost this month as investors rushed into cyclical stocks. . Honda and JR East jumped about 20% while ANA climbed more than 10%, outperforming growth stocks such as payment solutions provider GMO Payment Gateway and e-shopping operator ZOZO .

Kazuharu Konishi, managing director of the equity investment division of Mitsubishi UFJ Kokusai Asset Management, said that “the positive momentum in the Japanese market will likely continue into the next year,” as hopes for a vaccine and expectations of even better third quarter results boost investor confidence.

The country remains nervous over a resurgence of COVID-19 infections. The Tokyo Metropolitan Government last week raised its coronavirus alert to the highest of four levels as the number of cases rose. Many prefectures overshadow case files day after day. Nationwide, Japan has confirmed more than 2,000 new cases in recent days.

However, “the scale of infections is very different from other parts of the world,” points out Oshiden of BNY Mellon, comparing the battle in Japan to countries with more severe epidemics like the United States, which has recorded in average about 900 deaths per day since the start of the pandemic.

“The level of COVID-19 cases in Japan is without any strict lockdown measures,” he added, “and the country will likely continue to be supported by its ability to keep its economy running.”