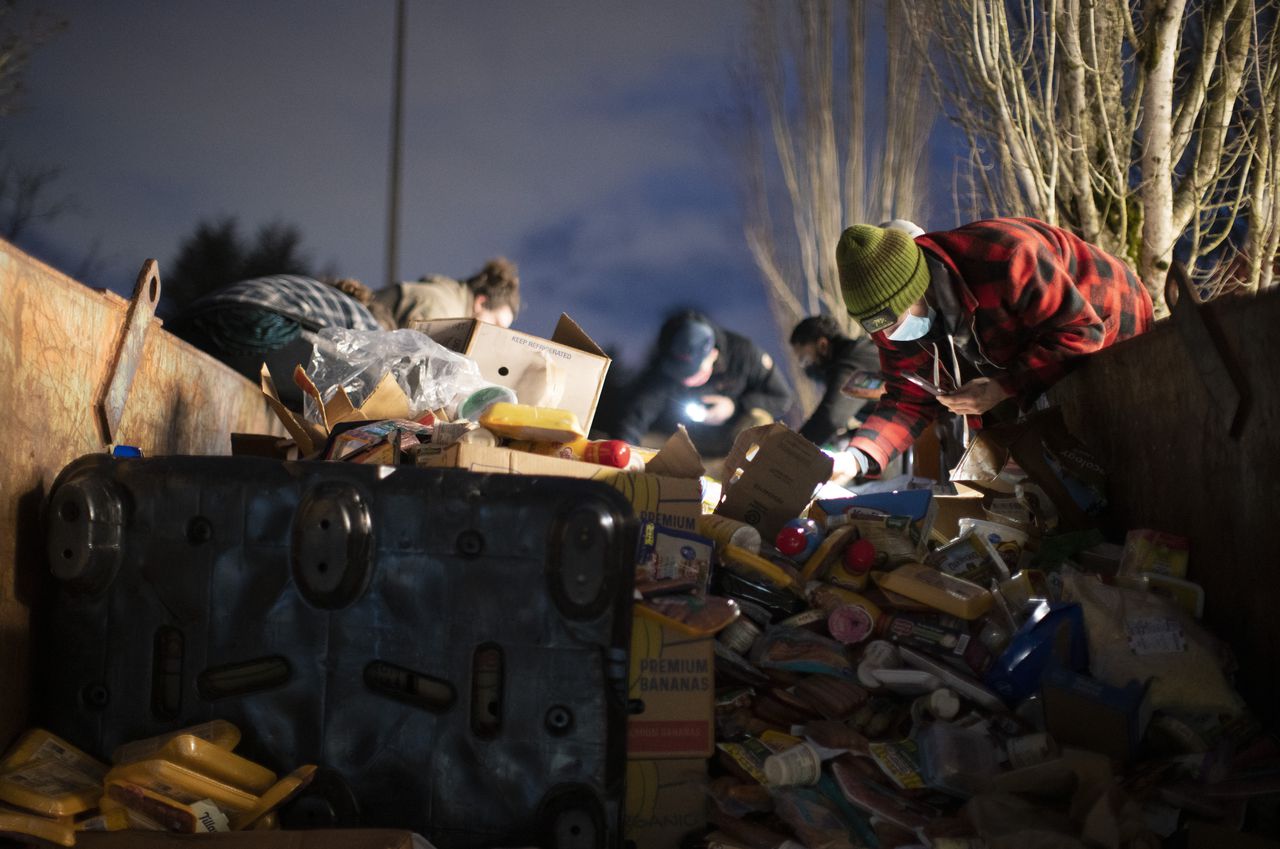 Hollywood West workers Fred Meyer had a four-hour safety deadline to act to recover thousands of perishable items after the store lost power during the blizzard on Tuesday morning.

But freezing conditions in Portland made it difficult for pantries to haul trucks to the store to collect the load in time, Fred Meyer’s spokesman Jeffery Temple said Wednesday. Two pantries confirmed that they could not have recovered the food.

Food was unrefrigerated as the power outage continued in the northeast Portland store, prompting employees to throw away boxes of packaged meat, cheese and juice, whole turkeys, racks of ribs and other items they feared they had spoiled.

The pile of food thrown into two large dumpsters drew a crowd of 15 to 50 people who began to take some of it. Employees called the police when they felt the scene had become tense. Activists said the police were guarding the food. Police said they were responding to restore order. The national media picked up the story.

The escalation has highlighted intense food insecurity that many people faced during the pandemic, as well as a food distribution system hampered by unprecedented loss of electricity for more than 300,000 customers in the stricken region. on days of ice and snow.

At least one other grocer in the area also said they had to throw out food due to the power outages.

Fred Meyer’s policy calls on stores to donate food to hunger relief agencies rather than throwing it away if it is safe, Temple said.

But he cited requirements from the Oregon Department of Agriculture and guidance from the Centers for Disease Control and Prevention that say perishable foods that aren’t refrigerated for four hours are not safe to eat.

The team at our store was concerned that area residents would consume food and risk causing foodborne illness, and they engaged local law enforcement out of caution, Temple said in a letter. electronic. We apologize for the confusion.

For a few hours on Tuesday afternoon, people gathered in the trash cans of Hollywood stores to collect discarded food. Police said they arrived when store workers called them after trying to stop people from sorting the stack. Employees feared a physical confrontation could erupt, police said in a statement.

Morgan Mckniff, a prominent Portland Police activist and outspoken critic who lives in the neighborhood, said workers were guarding the dumpsters and then the police moved in. Another well-known activist, Juniper Simonis, arrived to document the police presence and said people were threatened with arrest for trespassing. Simonis said the food appeared to be in good condition.

Mckniff and Simonis said the confrontation spoke of a distorted societal value system.

The people who were there weren’t there for selfish reasons, they were there to distribute food to the starving people in the city, Simonis said.

Fred Meyer touted his Zero Hunger / Zero Waste plan, which commits to eliminating waste throughout the Kroger company by 2025. In fact, Fred Meyer sent a letter to employees on Tuesday afternoon to salute the work. company on the program.

Stores are relying on food bank organizations to do pickups for the program, but time has prevented it, he said.

He didn’t know the exact amount of food lost at the Hollywood store or if other Fred Meyers had to throw food as well.

Kim Rodgers, a spokesperson for New Seasons Market, said five of the company’s Portland-area stores lost power and had to throw out food for the same reason.

New Seasons is committed to reducing food waste by 50% by 2030 and has relationships with more than 50 food recovery and hunger relief organizations, Rodgers said.

But this week, she said, no partner has been able to collect and store the product safely. As a result, we had perishable goods that needed to be disposed of properly under food safety regulations.

Safeway, Albertsons and Whole Foods did not respond to requests for comment from the Oregonian / OregonLive.

The Tense Situation in Hollywood Fred Meyer made it clear that people are hungry in Oregon.

In Portland public schools, nutrition services staff normally provide take-out meals for neighborhood children on Mondays, Wednesdays and Fridays. But those distributions were canceled due to snow on Friday and Monday for Presidents’ Day, leaving families who rely on those meals short. Beaumont Middle School, one of the district’s dining venues, is about two miles northeast of Hollywood Fred Meyer.

About one in five people are food insecure in Oregon, according to a recent Oregon State University Report.

Mumm couldn’t say if his agency had a word on picking up food from Fred Meyer, but said the food bank couldn’t have recovered it anyway because the storm had limited his resources.

She noted that the Food Bank Fresh Alliance initiative aims to connect hundreds of grocery stores with community organizations that distribute food in their neighborhoods.

Perishables are not always safe for donation, but Mumm said there is a process to verify food and ensure food that is safe is donated to those in need.

Kyle Camberg, executive director of the Sunshine Division, the nonprofit affiliate of the Portland Police Office, said the organization was forced to shut down last Thursday due to freezing conditions. It provides food and clothing for Portland families and those in need.

The Sunshine division remained closed until Tuesday, preventing it from taking out its refrigerated trucks for any fundraising.

In this particular case, we would not have been able to physically get a truck from our locations to them due to the conditions, Camberg said.

Bacteria can begin to grow on perishable foods once the temperature hits 41 degrees, said Andrea Cantu-Schomus, spokesperson for the Oregon Department of Agriculture, which licenses and inspects grocery stores.

The presence of many bacteria is not easily identified by smell, touch or sight, she said.

The four-hour rule for perishable foods kept above this temperature is even stricter at two hours for meat, poultry, fish and prepared foods with respect to donations, she said.

The ministry has been in contact with several of our retail companies to ensure they are monitoring food storage conditions, she said. Many companies are taking steps to move perishable food items into temperature-controlled containers to preserve them during the crisis, but in some cases the food could not be retrieved before its safety was compromised. The ODA’s position in these cases is that food should be thrown out to protect public health.

Joy Waite-Cusic, professor of food safety systems at Oregon State University, said Fred Meyer could have opened up to prosecution if people ate food that the store threw away and then got sick.

They took this food that they didn’t really have a temperature history on and put it in the trash, Waite-Cusic said. They don’t manage this environment for sanitation. Now, if someone comes for this food and gets sick, there is a risk of liability for them.

Scott Kerman, executive director of Blanchet House, said the organization served more than half a million meals last year in downtown Portland, a 60% increase from 2019.

This was entirely caused by the pandemic and the economic crisis, Kerman said. And there is a whole range of people’s experiences with food security. Maybe they don’t have any food resources, or maybe some families can get there halfway through the week, but their food needs are not fully met.

While Kerman said he was uncomfortable commenting on the confrontation with Fred Meyer because he did not know the context behind the decisions to throw away the food, he said Blanchet House would have absolutely accepted donations from the grocery stores that had to dispose of the product due to the power outage.

Blanchet House accepted donations from Portland Community College and a local high school due to the power outages.

They called us because they didn’t want their food to go to waste, Kerman said.

To be sure, Blanchet House has strict standards for the food they accept and won’t accept donations if, for example, the meat has gone bad after a power outage.

I’m not sure what exactly was in the dumpster or the state of it, but at the very least, the Fred Meyer incident highlights the need for food that exists, Kerman said. .