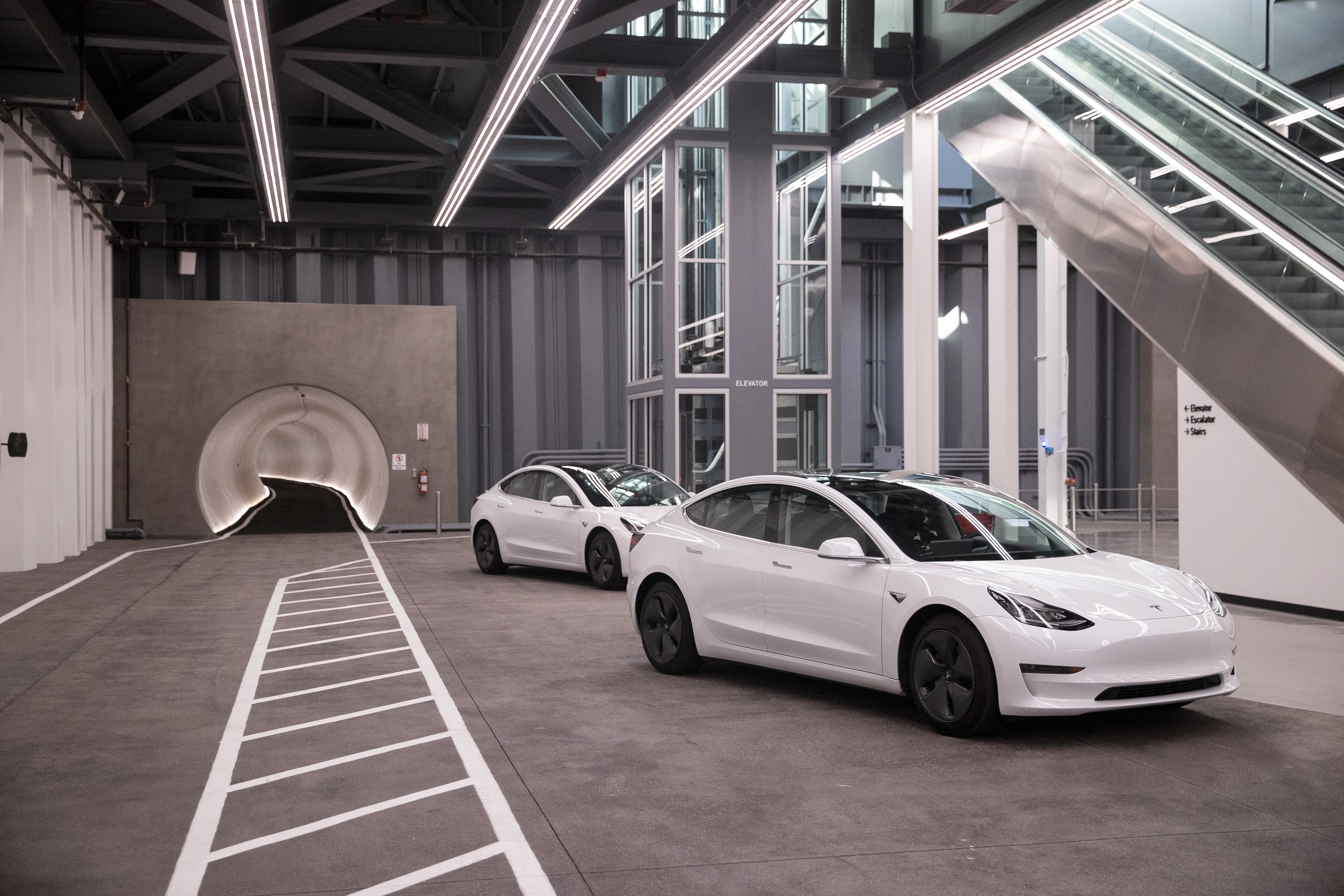 Trips through the tunnels are a ‘Las Vegas only’ experience with LED lighting that travels a second-to-second rainbow of colors lining the walls of the tunnel.

Cars have enough space in the tunnels for drivers to open the doors and exit in an emergency.

Drivers reach top speeds of around 35 mph on straight tunnel lines. Electric vehicles drive quietly over paved underground surfaces. At the ends of the tunnel, Model X and Model 3 Teslas climb a ramp to reach the surface.

Parallel tunnels nearly one kilometer long will allow convention passengers to travel to and from three stations when the system, developed by entrepreneur Elon Musk, becomes fully operational. A certificate of occupancy has been issued to the Las Vegas Convention and Visitors Authority.

Crews began drilling the 4,475 feet of earth and rock 40 feet underground in November 2019, completing the first tunnel drilling in February 2020. Drilling ended on the second tunnel in May 2020, and efforts to pave and light the tunnels were completed at the end of last year with several safety checks carried out before the tunnels were handed over to the LVCVA.

Throughout construction, The Boring Co. did not let members of the media see the progress, but invited members of the LVCVA board of directors and dignitaries from other municipalities to see them.

Musk tweeted occasional photos of the tunnels and stations.

Steve Hill, president and CEO of the Las Vegas Convention and Visitors Authority, said Tesla sedans would initially be used for the system and there could eventually be vehicles with larger capacity.

“It seems like during a pandemic now is not the time to increase capacity,” Hill said before several reporters went to the ends of the system.

Hill said Tesla’s fleet started with 11 vehicles and is expected to grow to 35 and eventually grow to 60.

Once operational, The Boring Co. will drive Tesla vehicles through the tunnel, turning a 15-and-a-half-minute walk on the surface into a journey of a few minutes. Tesla vehicles capable of carrying up to 16 passengers are expected to be used in the system, but it was not disclosed when these vehicles would be delivered.

While the tunnels and vehicles are designed to operate in autonomous mode, LVCVA officials said Boring Co. drivers would be employed in the early stages of operations for added safety.

The system is designed with three stations, one underground near the entrance to the Central Hall of the Las Vegas Convention Center and two above ground stations at both ends of the system. Asphalt ramps are in place to allow vehicles to surface for above ground loading at the east and west ends of the road. The east station, known as Station 1, is near an entrance to South Hall, while Station 3, on the west side of the Convention Center campus, is near the new West Hall.

No details on queuing and loading procedures or waiting times for trips were given.

This is the escalator that descends to Central Station from the Boring Companys Convention Center Loop. #vegas #boringcompany #Elon Musk pic.twitter.com/RS0g3AuPKO

Other Boring Co. tunnel projects are on the horizon in Las Vegas. Direct tunnels that would link the Las Vegas Convention Center to Encore Las Vegas and Resorts World Las Vegas have been negotiated by Wynn Resorts Ltd., the operators of Encore, and the Genting Group, which builds Resorts World.

In addition, The Boring Co. has negotiated with the City of Las Vegas and Clark County to develop what is known as the “Vegas Loop,” a 15-mile underground transit system with stations at stations. and local attractions.

Hill said Boring indicated that the cost of the Vegas Loop system would be somewhere between how much it would take to take a bus and how much it would cost for an Uber ride. Like traditional ridesharing companies, the cost would be per vehicle, not per person.

The biggest difference between the Vegas Loop and the Las Vegas Convention Center Loop, besides the length, is that the convention center people transfer, contracted to be built by the LVCVA, will be free for the clients of the convention to ride while the vegas loop is under construction. speculation that stations pay for their own stations and passengers must be transported through tunnels to their destinations.

The contract to build the Convention Center Loop was controversial as Musk’s company had never built one for commercial purposes and the local system will be the first to operate. The city of Miami became interested in the system because it is considering a tunnel under the Miami River to connect the downtown area to the Brickell Financial District.

The Teslas will feature pilots when the Boring Company system at the Las Vegas Convention Center debuts, but there are plans to convert to stand-alone rides in the future. #vegas #boringcompany pic.twitter.com/JWak5q8vNL

A big advantage of the Musk system is that it is inexpensive to build. The tunnels are much narrower than conventional subway tunnels, and The Boring Co.’s drilling machine makes bricks to line the tunnel as it digs, making it economical to build.

The Boring Co. said the city-wide tunnel system would operate like a snowmobile, with one passenger choosing the destination and the vehicle taking the most direct route without stopping at other stations.

The company has not announced how much it expects to charge passengers.

Shein, a Chinese fast fashion retailer, is a hit with American teens Quartz

John Oliver is weird, but we come to the same conclusion