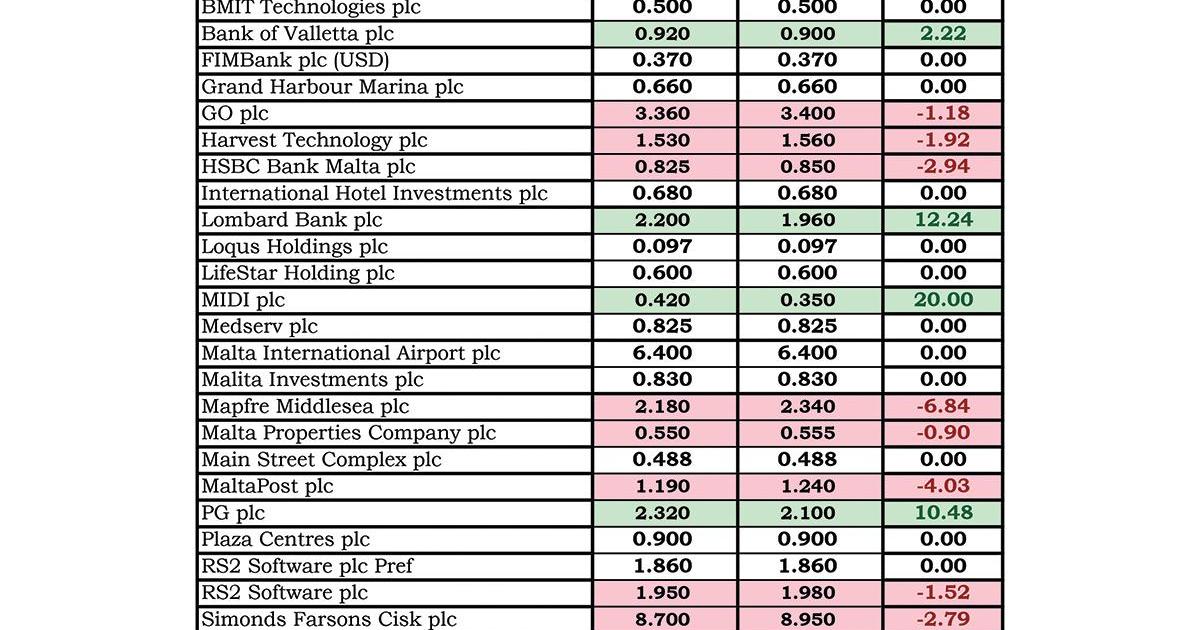 The MSE Equity Total Return index recorded a further increase of 0.4%, closing higher for the fourth time in a row, reaching 8,275.375 points. A total weekly turnover of € 0.4 million was achieved over the four trading days.

Of 15 active stocks, four headed north while another eight closed in the opposite direction.

Malta International Airport (MIA) announced the traffic results for the month of May. As the Maltese Islands moved closer to reopening travel and tourism, MIA recorded 75,420 passenger movements in the month following that recovery.

This total for May translates to a drop of 88.8% from the same month in 2019, but marks a slight improvement over the first four months of 2021, in which monthly passenger movements have consistently remained below the bar. of the 40,000.

The main markets in May were Italy, Germany, France, Poland and Turkey, with results from these markets being driven by the relaxation of some restrictions on travel from Malta and the resumption of flights to a number of regional airports.

Turkey, on the other hand, remained an important connecting hub for passengers who could not travel directly to their final destination due to the restrictions in place.

The seat load factor for the month of May was 62%. The airport expects the seat capacity deployed by airlines in June to more than double the capacity in May, as passenger demand is expected to gradually start to recover.

Bank of Valletta plc was the most liquid, generating a total weekly turnover of € 0.1 million. A price increase of 2.2% was recorded when it closed at 0.92 €. This is the result of 136,794 shares spread over 18 transactions.

Yesterday, HSBC Bank Malta plc announced a strategic initiative to further improve its operational structure, leveraging the HSBC Group operating models, in order to gain efficiency and improve the customer experience. The strategic initiative focuses on the transformation and automation of certain areas within the bank, but also on a planned transfer of a number of employees and activities to a local service provider.

To achieve this, the bank is proposing the launch of two voluntary redundancy plans (the “plans”) which will have an impact on a limited number of areas of the bank, subject to the MUBE agreement.

The restructuring costs to make these changes will be recognized in the 2021 financial results, but since the arrangements are voluntary, the amount will depend on the number of applicants. The bank will make another company announcement in due course.

Yesterday, FIMBank plc announced that Fitch Rating has released its latest rating on the Bank, downgrading the long-term issuer default rating (IDR) to “B” from “B +” and the sustainability rating (VR) to “B” of “b +”.

After having gone through a turbulent year, the bank believes that its defined strategy will allow sustained growth and that the continued success of bad debt collection will further improve the strength of the organization. No trading activity was recorded during the week.

In the real estate sector, three stocks were active. MIDI plc was the best performer, closing up 20% at € 0.42. Six transactions involving 40,250 shares were executed. On the other hand, Malta Properties Company plc closed slightly in the red at € 0.55, which equates to a movement of 0.9%. This is the result of 51,051 shares spread over 11 transactions.

Meanwhile, Trident Estates plc was active but closed unchanged at € 1.50.

Retail conglomerate PG plc posted a double-digit gain of 10.5% on thin deals. Since the start of the year, equity has increased by 16%. In contrast, Simonds Farsons Cisk plc traded down 2.8% to end the week at € 8.70. Three transactions involving 4,313 shares were executed.

Last Thursday, International Hotel Investments plc held its 21st annual general meeting. All the resolutions on the agenda were approved. The action was not active during the week.

Eight issues were active on the MTF Prospects market. The 5.5% Testa Finance plc 2029 was the most liquid, as it generated a total weekly turnover of € 28,508.

This article, compiled by Jesmond Mizzi Financial Advisors Limited, is not intended to provide investment advice and its content should not be construed as such.

The company is licensed to provide investment services by MFSA and is a member of the Malta Stock Exchange and the Atlas Group. Directors or related parties, including the company, and their clients may have an interest in the securities mentioned in this article.

Independent journalism costs money. Support Times of Malta for the price of a coffee.

Cherry Creek remains dominant in Class 5A with 37th title