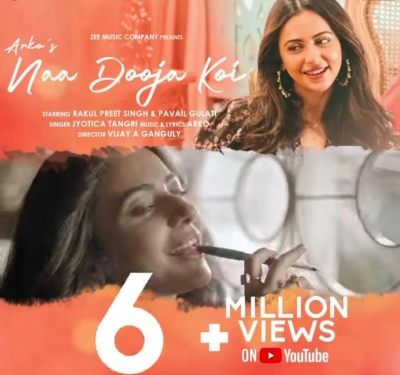 Rakul Preet Singh: “Naa dooja koi” is a romantic song from a girl’s point of view

Hyderabad– Actress Rakul Preet Singh appears in the music video for Jyotica Tangri’s new song “Naa dooja koi”. The video crossed 25 million views on YouTube in less than a week, and the actress is happy the song is catching up.

“This song is super romantic and from a girl’s point of view. The beauty of this song is that it tells a full story in the video. I am so overwhelmed with the audience she touched and the love she has for the audience. It’s a beautiful song that grows in you, ”Rakul told IANS.

The song’s music and lyrics are attributed to Arko and the video also stars actor Pavail Gulati.

Bombay– Actress Elakshi Gupta, who made her Bollywood debut with Ajay Devgn’s “Tanhaji: The Unsung Warrior”, will soon be seen in her first Marathi film “Bhram”. The actress says that although she first met the cast, she received a lot of support from everyone.

“The production house, director Vaibhav Londhe and the star actors have all been very supportive. We all enjoyed the process and did our best. I didn’t know any of my co-stars before. I met them directly on the set. Everyone is sympathetic and supportive. We used to discuss the scene and suggest we go into our best version so that the whole scene is perfect, ”she told IANS.

Elakshi also shines a light on the type of character she plays.

“I play the girlfriend of the lead actor who is also one of the suspects in this thriller,” she says.

The actress will also be seen in her upcoming Bollywood film “Luv You Shankar”.

Poonam Pandey on Raj Kundra: He leaked my number with the message “I will undress for you”

Bombay– Actress and model Poonam Pandey claims that Bollywood businessman and actress Shilpa Shetty Kundras husband Raj Kundra following a contractual disagreement in 2019 leaked his number with a message saying ” I will undress for you “.

Kundra was taken into custody until July 23 after being arrested by Mumbai police for creating and posting pornographic material.

Poonam had previously filed a lawsuit against Kundra and its associates at Armsprime Media, the company that managed its app. She had complained that they were using her videos illegally even after their contract ended.

Poonam also said that following the disagreement, his number and some images were leaked. This led to her receiving calls of a derogatory nature.

In a video message to IANS, Poonam said, “When I said no to signing the contract, he leaked my phone number with a caption: ‘Call me now. I will undress for you. He posted this message to my personal number and broadcast it. I still remember after that my phone kept ringing. I have received calls from all over the world, including threatening messages.

Poonam also said she had to go into hiding.

” I was not home. I lived as a fugitive. I was worried that something would happen to me because of the kind of messages I was getting, like “I know where you are”. It was scary, ”Poonam said.

Bombay– Actress Kriti Sanon posted the music video for the track “Rihaayi from” on her social media account on Wednesday. The track was sung and composed by AR Rahman while the lyrics are by Amitabh Bhattacharya.

The actress uploaded a photo of the track to Instagram and captioned it, “Kaun samjhe dard tere, kaun tujhko #RihaayiDe? #Mimi’s most soulful song! A personal favorite.

In “Mimi”, Kriti plays the role of a surrogate mother. The film, directed by Laxman Utekar, also stars Pankaj Tripathi and Supriya Pathak. The film was produced by Dinesh Vijan.

Bombay– Punjabi singer Mika Singh has said his brother Daler Mehndi is Rahul Vaidya’s preferred choice for a performance at his wedding.

Mika added, “It was a happy ending and we all had a blast at the wedding. My brother Rahul and bhabi Disha had a lot of fun and they were super happy. This is what was worth it. All’s well that ends well, I must say.