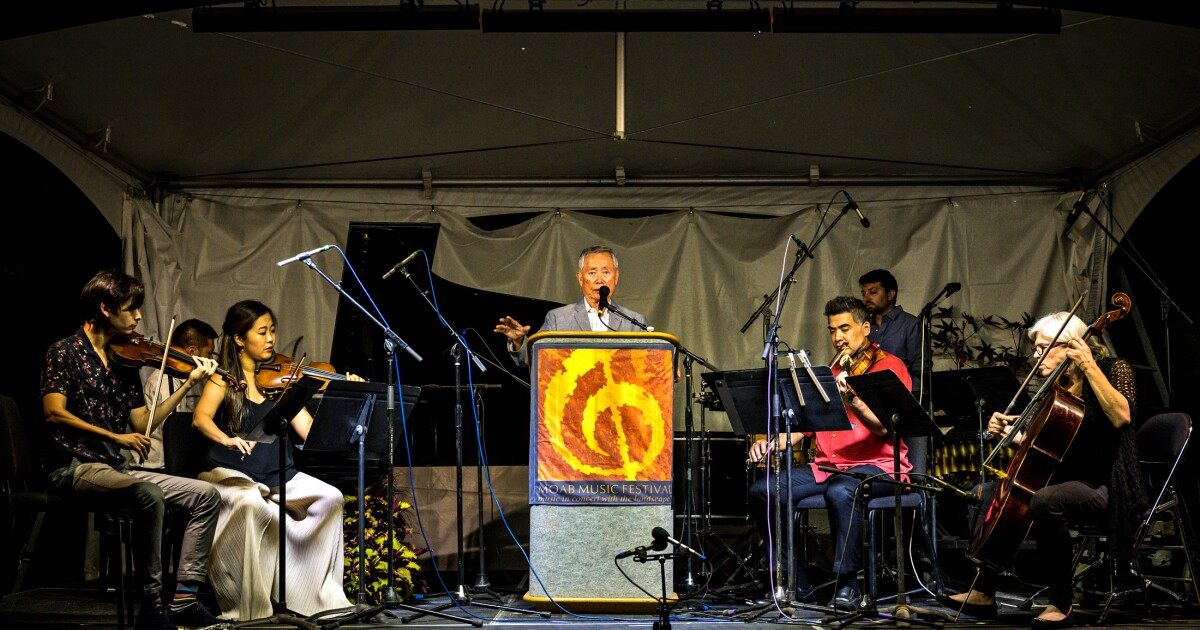 The sun sets over a patch of desert in southeastern Utah. You can just make out the din of the national highway, carrying travelers to nearby Arches and Canyonlands National Parks.

But here, just minutes from these popular destinations, is a simple dirt road, a bit muddy after the recent rains. A place you would definitely miss if you weren’t looking for it directly.

Composer Kenji Bunch tunes his viola near one of the only remaining evidence that nearly 80 years ago men of Japanese descent were imprisoned at this site. A concrete slab and two poplars are some of the remains of the Moab Isolation Center.

It is George takeifirst visit to the site. Throughout his life he made many pilgrimages to such places, bringing their stories to light. There were 10 large Japanese-American containment camps. Smaller isolation centers like this one in Moab have jailed people who have shown any sign of resistance to their own. incarceration.

The years of WWII were filled with madness on the part of the United States government, Takei began.

He was five, his brother four, and his sister was just a baby when the government took them out of their home. After the bombing of Pearl Harbor, President Franklin Delano Roosevelt signed an executive order sending the Takeis and thousands of other Japanese-American families to jail.

About 120,000 of us, summarily rounded up without charge, without trial. Due process, the central pillar of our justice system, has simply disappeared, Takei adds.

The main American decision-makers have justified the incarceration of their own citizens by a racist stereotype. They called out to the Japanese impenetrable, impossible to understand.

Takei continues: And because we can’t say what they’re thinking, as a precaution it would be safe to lock them up before they do anything. The absence of proof was the proof. We have been subjected to the same kind of attitude towards Asian Americans that we are now experiencing with the pandemic.

Violist Bunch composed the score for Lost freedom: a memory. He talks to me outside a popular cafe in Moab, wearing a shirt with Asian AF written on it.

George will rightly remind us that there has been anti-Asian sentiment since there were Asians in this country, Bunch says.

He is proud of his Japanese ancestors, but says harmful racist stereotypes are more prevalent than ever. He calls anti-Asian harassment and violence during the pandemic a chronic disease outbreak.

It is not a recent problem. It’s just an ongoing transgenerational racial trauma.

It’s not lost on Bunch, that just a generation ago he would have been in jail as well. He imagines his own young children behind barbed wire when Takei was five years old.

Now as a father with two little children and just imagining them with their innocence and confidence. To imagine them having to live it breaks my heart, says Bunch.

In Lost freedom, a memory, music and narration intertwine to center Takeis’ childhood perspective in the performance. It creates bittersweet moments, like when young Takei is excited to sleep in a horse stall. But much of it is just heartbreaking. When his family is transferred to a high-security containment camp, Takeis’ father tells his children that they are all going on vacation by train.

Lost freedom is another project inherited from Takei. He has spoken around the world about the incarceration of Japanese Americans, wrote opinion pieces in major newspapers, acted in a musical, and has a pre-teen graphic memoir on his experience.

He says he uses all the tools I have as an artist to educate Americans today, as few Americans can, to tell this very personal story and share it so that we can have better Americans. in the future.

Back on site at the former Moab Isolation Center, Bunch performs a piece for Takei. He wrote it after his first pilgrimage to a containment camp in Idaho. He says he wants to be like Takei, an activist artist helping restore humanity to those from whom she was taken. In a world where people can disagree on facts, Bunch says art might be the only way.

We have a unique ability and responsibility as artists to do this. It’s kind of our last best chance, isn’t it?

The Moab Music Festival continues this weekend. A short documentary on the creation of Lost freedom: a memory is under construction. And plans for its New York debut are slated for 2022.

This report was produced for the Rocky Mountain Community Radio Coalition, of which KSUT is a member. RMCR includes more than 15 member stations across Colorado and parts of Wyoming, Utah, New Mexico, and Kansas.

Mark Duggan provided online production of this story for KSUT.

The actor is delighted to return in “Escape to Margaritaville” | Entertainment