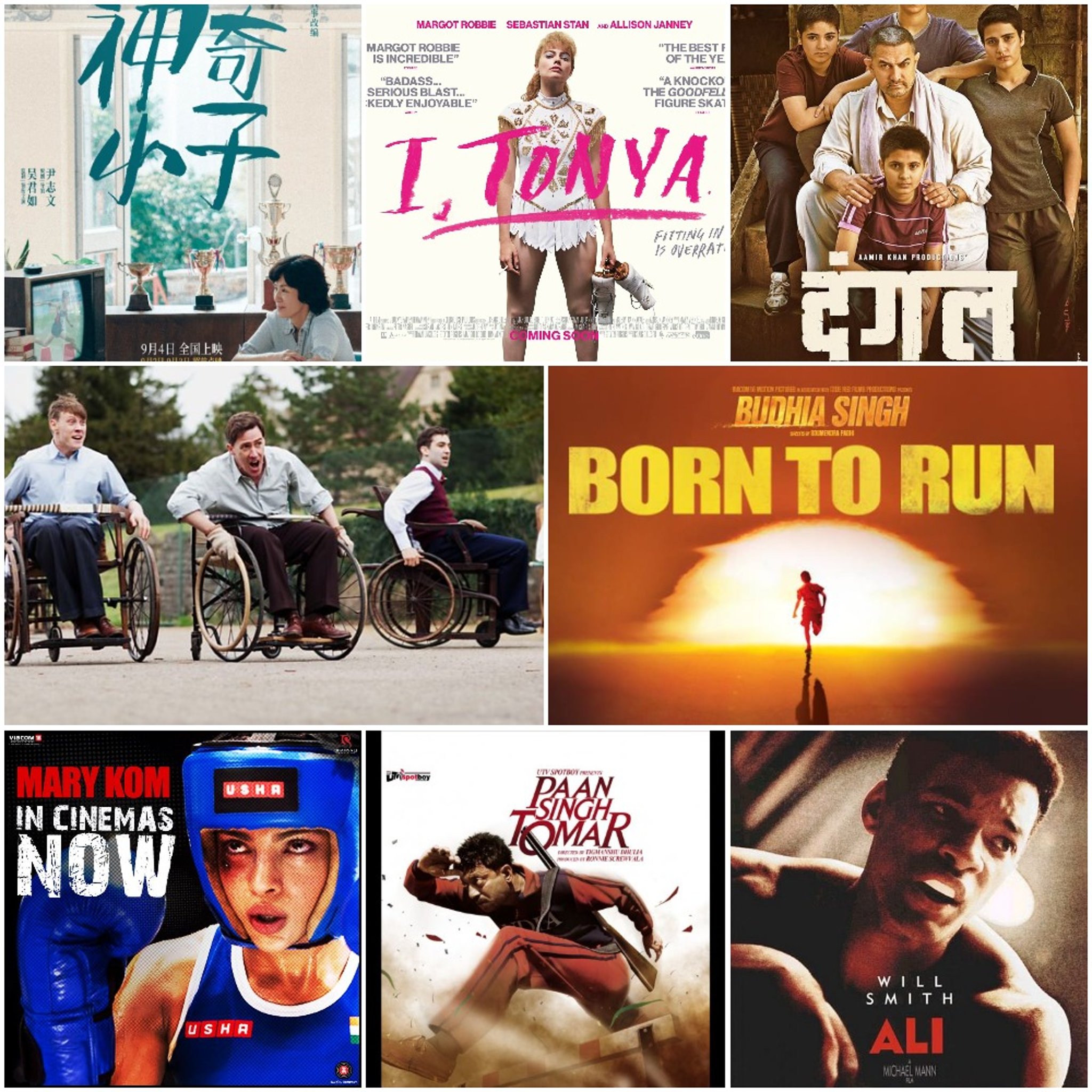 If you’re feeling inspired by the Tokyo 2020 Olympics and Paralympics, choose from a selection of amazing sports biopics

These Hollywood, Bollywood and international films celebrate extraordinary athletes with unique stories and backgrounds, illustrating their journeys and the struggles before their victory.

With films in English, Polish, Hindi and Cantonese, we bring you a selection of sports biopics.

This Hindi biopic is based on the life of boxer Mary Kom. Nicknamed Magnificent Mary, Kom is the only Indian boxer to qualify for the London 2012 Olympics.

Kom is played by Priyanka Chopra Jones with the film focusing on her childhood through to the start of her career, while also navigating her love for boxing with family conflicts and societal norms. Mary Kom won the National Film Award for Best Popular Film Providing Healthy Entertainment.

A Polish biographical film that follows the life of Jerry Grski as he navigates a life around loss and addiction to winning the Iron Man Double Triathlon.

The movie follows Grski from his childhood, and we watch his addiction spiral out of control and clap as we watch him slowly regain control. This inspiring film won six awards at the 42nd Polish Film Festival.

Dangal translates to a wrestling competition in Hindi, and this movie focuses on exactly that. Dangal follows the story of the Phogat family, a family of Indian wrestlers. Mahavir Singh Phogat, played by Aamir Khan, is an amateur wrestler who dreams of winning gold for India.

After an altercation at school, he discovers that his dreams can be realized thanks to his two older daughters, Geeta (younger; Wasim, older; Shaikh) and Babita (younger, Suhani Bhatnagar, older Malhotra). International success, this film is the first Indian film to be screened at the 7th Beijing Film Festival.

I, Tonya follows the early days of figure skater Tonya Hardings (played by Margot Robbie) and its connection to the 1994 attack on Tonyas’ rival and Olympic teammate Nancy Kerrigan (Caitlin Carver).

This film takes the form of a mock documentary, with Tonya and her ex-husband, played by Sebastian Stan, having interviews and breaking the 4th wall. Like a dark comedy, this film will leave you laughing and informing you about the career of the double Olympians and their unfortunate and rapid demise. This film won nominations for Best Actress and Best Editing.

Saina follows the true story of Indian badminton player Saina Nehwal (played by Parineeti Chopra) from her childhood as a middle class girl from Haryana to Olympic bronze medalist.

Winning over 24 international titles and a former world number 1, Nehawals’ journey is described with hard work, dedication and ambition. Its well-deserved biopic was originally scheduled for September 2020 but was postponed due to Covid-19 and was released on March 26, 2021.

The Best of Men follows Guttmann as a Jewish refugee from Nazi Germany and his unique and controversial (at the time) methods of working with paraplegic residents. Inspirational and informative, this unique and underrated film won the Philadelphia Jewish Film Festival’s Best Narrative Audience award.

This extraordinary film follows the journey of Budhia Singh, the world’s youngest marathoner, who ran 48 marathons at the age of five. Coming from a rocky environment, Singh, played by Mayur Patole, was forced to run as a punishment.

Singh was still running five hours later, but a medical examination revealed he was fine. This extraordinary tale leaves you in awe of the strength of the human spirit. Likewise, an Emmy-nominated feature documentary titled Marathon Boy was released in 2011 on Singh.

From 1987, this film centers on the Schultz brothers (played by Channing Tatum and Mark Ruffalo), both 1984 Olympic gold medalists in wrestling. Passionate wrestling millionaire John du Pont, played by Steve Carell, attempts to recruit and train the two brothers for national, world and Olympic competitions.

This film provides a shocking glimpse into the reality of life for some athletes after the Olympics and how far some people will go for glory. Fox Catcher was nominated for the Palme d’Or at the 2014 Cannes Film Festival where it won the award for best director. Fox Catcher was also nominated for five Oscars and three Golden Globe Awards nominations.

This Cantonese-language film follows the life of sprinter So Wa Wai, the first Paralympic athlete from Hong Kong to win a gold medal. Wai, played by Chung-Hang Leung, raced for Hong Kong for five Paralympic games, from 1996 to 2012. With a slogan of Even if you start at a disadvantage, you can always be the first to cross the finish line, this film exudes content inspiration.

This Hindi biopic is based on the soldier, athlete, and later rebel, Paan Singh Tomar. Tomar, played by Irrfan Khan, is praised for winning gold for seven years in a row at the Indian National Games. But when his mother is murdered and the police refuse to act, things change and Tomar finds himself rebelling against the system he once applied.

Widely acclaimed by critics, Paan Singh Tomar won the award for Best Feature Film and Khan’s amazing skills in this film earned him the Best Actor award at the 60th National Film Awards 2012. This film is raw and honest, depicting life in India shortly after the collapse of British India.

Official Ali poster (2001) with Will Smith

This Ali starting cast portrays the life of legendary boxer Muhammad Ali, played by Will Smith, from 1964 to 1974. It features his conversion to Islam, the capture of his heavyweight title, his take on the Vietnam War and reclaiming his title from George Foreman.

After his life, the film also touches on racial issues in the United States, including the assassinations of prominent black leaders, Malcolm X played by Mario Van Peebles and Martin Luther King Junior, played by LeVar Burton. Smith and Voight received Oscar nominations for Best Actor and Best Supporting Actor in Ali.

Considered one of the best underdog sports stories of all time, Cool Runnings is a classic. This film is loosely based on the events of the first Jamaican national bobsleigh team at the 1988 Winter Olympics. This humorous film makes you laugh and inspires you after watching four male athletes make their debuts on a bobsleigh team in Jamaica .

Rising Phoenix is ​​not a biopic but a documentary describing the story of nine Paralympic athletes and their journeys in Olympic competition. It features stories from Tatyana McFadden, Jonnie Peacock, Ryley Batt, Jean-Baptiste Alaize and more. Although released on Netflix in 2020, this documentary film received positive reviews from critics and is worth watching.

Thanks for the reading. NationalWorld is a new national news brand, produced by a team of journalists, editors, video producers and designers who live and work across the UK. Learn more about who is who in the team, and our editorial values. We want to create a community among our readers, so follow us on Facebook, Twitter and Instagram, and continue the conversation. You can also subscribe to our newsletters and get a selection of our best reads delivered to your inbox every day.

Empire actor Kunal Kapoor said: “I will play Babur again if you give me a different perspective”