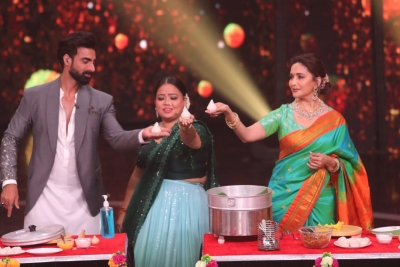 Bombay– Acclaimed Bollywood actress Madhuri Dixit, who is also a judge on the dance reality show ‘Dance Deewane’, will be seen walking the sets with a Ganpati idol in her palms, along with judges Dharmesh Yelande, Tushar Kalia and the hosts Bharti Singh and Haarsh Limbachiyaa.

Madhuri will tell the story of her love for ‘Modak’ and says, “The making of Modak is about getting together as a family, coming together and celebrating this great festival.”

This will lead to a Modak-making session on stage, as Madhuri will teach everyone how to do it correctly. Not only that, for all the married women on set, Madhuri will do a Haldi Kumkum rasam. She will apply haldi (turmeric) and sindoor (vermilion) and will also offer beautiful saris, bindi and bracelets as part of the tradition.

All competitors will dedicate their performance to Lord Ganesha and there will also be Jacqueline Fernandez and Yami Gautam as special guests.

The show will end with Ganpati Visarjan on stage with the prayer to bring him back next year.

‘Dance Deewane’ airs every Saturday and Sunday on COLORS.

Bombay– Actor Vikrant Koul who made his film debut with Rani Mukerji’s “Mardaani” will be seen in one of the segments of the anthology “Hai Taubba 3”. He plays “Karthik”, a married man who soon finds himself embroiled in a love triangle.

Vikrant will be sharing screen space with Rutpanna Aishwarya and Amika Shail in the upcoming anthology.

Speaking about his character, Vikrant shared, “I’m trying out the role of Karthik who is a caring and dedicated husband. But then, as the story progresses, you can see other nuances of his character. The whole agenda is to break society’s taboos, and we’ve tried to do the same with this story. So it fits into the real world, it’s practical and relevant.

‘Hai Taubba 3’ will focus on women and talk about women who refuse to live up to societal norms and decide to step out of their monotonous life to live the life they really want. The other segments of the series will feature “Paurashpur” actress Poulomi Das, famous “Splitsvilla” Arshiya Arshi, Aabha Paul and others.

‘Hai Taubba 3’ will air from September 11 on ALTBalaji.

Ananya Panday: I think I have the good qualities of the character of “Money Heist” in Tokyo

Bombay– Actress Ananya Panday is a very enthusiastic fan of the Spanish drama “Money Heist”. She says she is quite similar to the character of ‘Tokyo’ on the show.

The character of Tokyo is played by actress Ursula Corbero.

“I think I would be Tokyo because I would like to believe I have some of its good qualities. I think we’re both spontaneous. I’m a little badass, and yes, she knows what she wants, ”says Ananya.

However, her favorite character is Denver in the series, which is currently in its fifth season and streaming on Netflix.

“My first favorite is Denver (Jaime Lorento Lopez), because he’s super sexy, and I love his personality and I love his laugh. I love Nairobi (Alba Florez) because I think she is so badass and a strong woman, ”says Ananya.

Ananya will soon be seen in ‘Liger’ alongside Vijay Deverakonda.

Bombay– Singer Shilpa Rao grew nostalgic for Ganesh Chaturthi, remembering how she celebrated the festival with her grandmother and brother as a child.

“Ganesh Chaturthi connects me with my grandmother like when we were children, my grandmother did all the preparation of the Ganpati pooja, and she involved us (me and my brother) to install the flowers and make the chandan”, revealed Shilpa remembers his late grandmother.

However, right now, the ‘Ghungroo’ singer makes sure she has an eco-idol in her house every year.

“My Ganpati idol is eco-friendly every year, I try to get a clay murti without paint and color, water soluble and we can easily make the Visarjan at home. In fact, I’m always looking for an idol that has seeds or a sapling in it, so when you put it in a pot, it becomes a plant, ”Shilpa explained.

“I urge everyone to support small businesses, including small candy makers, we have to support them,” she said.

Bombay– As the new track “Click That B Kickin It”, as part of his BTFU album, has been released, singer-songwriter Karan Aujla says after the overwhelming response from the last two tracks, he’s now anxiously awaiting. fan reaction to the new song.

‘Click That B Kickin It’ is the third song released after ‘Intro’ and ‘Chu Gon Du?’, Which is part of the BTFU album. The album includes 11 songs.

Speaking about the song, Karan said, “BTFU is an extremely special passion project and ‘Click That B Kickin It’ is the second song on the album. “Chu Gon Do? Received such an overwhelming response from audiences that I’m delighted to see how fans will react to the album.

Not just a pretty face: Anupama Chopra on the rise of the actor-star