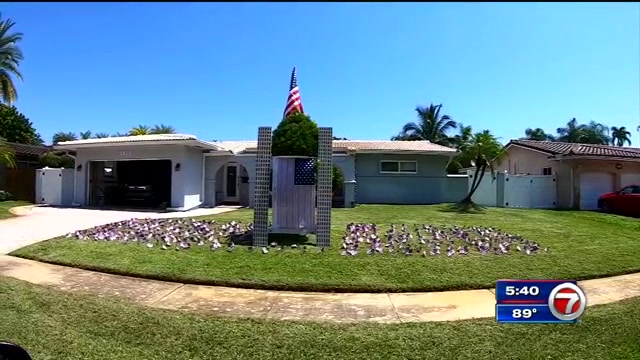 HOLLYWOOD, FL. (WSVN) – A former first responder who survived 9/11 in New York City marks the 20th anniversary of the tragedy with a moving tribute outside his Hollywood home.

The exhibit outside Shaya Gutleizers’ home may not be the most extravagant 9/11 memorial, but it is deeply personal.

Inside his residence and with his family by his side, the retired firefighter, 40, reflected on the day that changed his life two decades ago.

I was 20 years old. It’s like it was yesterday, even though it was 100 years ago around the same time, he said.

Gutleizer was a young emergency medical technician at the time. He said he had a day off when it became known that one of the World Trade Center towers was being evacuated.

He chose to react to the scene.

It is an incident that claims many victims like you never thought you would see, he said.

Gutleizer said he was at a safe distance when the south tower fell, but was just below the north tower moments before it collapsed.

I will be the first to admit that I was not prepared for what was to come, what I saw, he said. We understood the dangers, but seeing people jumping towers was, I think, the scariest and most messed up thing, for lack of a better word, the thing I have ever seen.

The retired EMT outlined his next steps.

The second tower began to collapse. We ran like hell, and at one point I ducked into a store front. I remember the big gray cloud that envelops everything, he said.

Like so many first responders, Gutleizer has spent over a week at Ground Zero, helping in any way he can.

It was what they call the bucket brigade. They were sort of passing buckets of rubble, he said.

Gutleizer still has the red World Trade Center emergency badge that granted him access to the site, as well as his mask and two helmets.

This one had fallen when I was fleeing the tower, he said, brandishing a blue helmet.

Gutleizer said he joined the military because of the 9/11 attacks, but his service was interrupted by lung problems.

Gutleizer retired from the New York Fire Department in 2017, and his family moved to South Florida.

He decided that the exterior of their home would pay a respectful tribute to the dead on this 20th anniversary.

It’s Home Depot, I was trying to figure it out, he said.

The exhibition includes painted wooden towers, connected by the flag of honor, with the names of the victims.

Gutleizer placed 412 small flags in the court, one for each first responder lost.

He hopes his dark display arouses the curiosity of a new generation.

In 2016, Gutleizers’ service as a first responder was honored in Congress, not only for his time spent at Ground Zero, but also for his efforts to renew federal law providing health benefits to those who fell ill in the years after September 11.

Copyright 2021 Sunbeam Television Corp. All rights reserved. This material may not be published, broadcast, rewritten or redistributed.