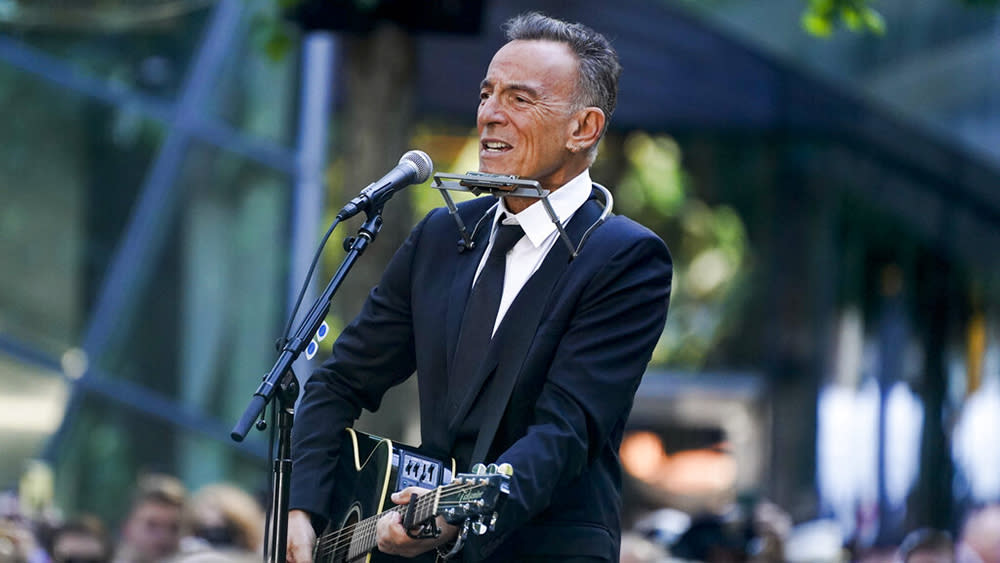 On the occasion of the 20th anniversary of the September 11 attacks, Bruce springsteen gave a moving live performance of Ill See You in My Dreams at September 11th memorial in New York.

Prior to the performance, Springsteen gave a speech in memory of the nearly 3,000 deceased. May God bless our fallen brothers and sisters, their families, friends and loved ones, he said. After the singer’s performance, there was a moment of silence at 9:03 a.m. to mark the moment when United Airlines Flight 175 crashed into the South Tower of the World Trade Center.

When Springsteen and the E Street Bands, The Rising, came out in 2002, Springsteen spoke to Nightline to explain how the 9/11 attacks inspired him. One of the most powerful images of the 11th that I read in the newspaper, some of the people going down were talking about the rescuers going up, Springsteen said. The idea of ​​these guys going up the stairs, up the stairs, up, up. I mean you could walk up a smoky staircase, you could be in the afterlife, move on.

Along with Springsteen, other world leaders and celebrities commemorated the 20th anniversary of the September 11 attacks.

In the weeks and months following the September 11 attacks, I was proud to lead an extraordinary, resilient and united people, said the former president. When it comes to uniting America, those days seem distant from ours. Malicious force seems to be at work in our common life, which turns every disagreement into an argument and every argument into a clash of cultures. Much of our politics has become a naked appeal for anger, fear and resentment. This leaves us worried about our nation and our future together. I come without explanations or solutions. I can only tell you what I saw. On the day of trial and mourning in America, I saw millions of people instinctively grab the hands of four neighbors and rally to a cause for one another.

Vice President Kamala Harris also referred to national unity in her speech in Shanksville, saying: In a time of outright terror, we turned to each other. Faced with a stranger, we saw a neighbor and a friend.

Mariah carey took to Twitter to speak on the anniversary of the terrorist attacks. On this anniversary of September 11, I remember the shock and anguish we all experienced with painfully deep sadness. Vivid images of the skyline that I grew up loving so much, suddenly changed forever, Carey said.

She then continued the post in a thread, writing: Still amazed at the number of innocent people who have been lost in an instant, gone forever but who will never be forgotten. I think of all the families who still mourn their loved ones 20 years after this devastating and tragic moment in our history. #Never forget.

Reese witherspoon also posted on Twitter, writing: My prayers go out to all the families who lost their loved ones that day 20 years ago. We will never forget. Always in our hearts.

Former President Barack Obama made an official statement on the anniversary, writing: Today we honor the nearly 3,000 men, women and children who died on September 11, 200, and the heroes who have always run towards danger to do what is right. Let us never forget this day and never take it for granted.

Jennifer Hudson added: It’s been 20 years and we will never forget. Join me in praying for the loved ones of all we have lost. #Never forget.

Octavia Spencer shared an image on Instagram, asking her followers: Where were you that morning?

Patti Smith also posted a poem on Instagram in remembrance of 9/11.

Backstreet Boys frontman AJ McLean thanked the heroes, writing: I send all my love to those we lost 20 years ago and their families who still mourn. In addition to pain and loss, we can also celebrate the many heroes who were born on this day. Hold your loved ones a little tighter tonight. #Never forget.

The official Sesame Street Twitter account wrote: 20 years ago, the city we love showed its resilience, strength and hope. To everyone affected that day or after, wherever you are, we’ve got you covered. #Never forget.

Phil Rosenthal tweeted about his presence in New York on September 11. September 11 must not leave a legacy of hatred and fear. I was in New York that day, and tragic as it was, for a little while afterwards most of America seemed united in love and compassion, and the world was with us. Remember? 20 years later, when a different kind of tragedy is among us.

“The Forgiven” review – The Hollywood Reporter