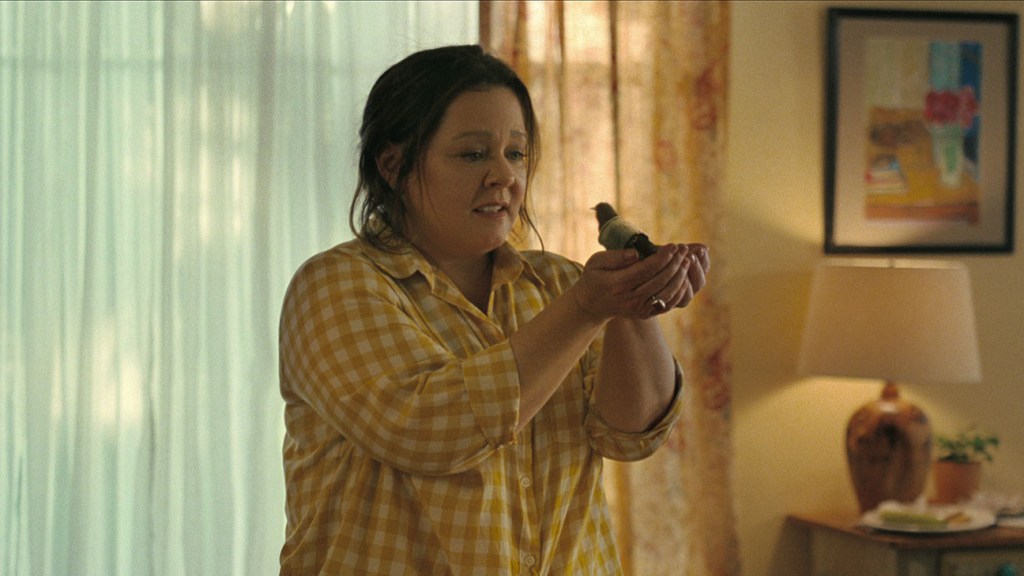 Two of the most endearing actors on screen, Melissa McCarthy and Chris O’Dowd play Lilly and Jack, a married couple happily painting a mural for their baby girl’s bedroom, as Starling begin. Cue the opening credits, and we find them a year later, struggling with the worst imaginable after losing their baby to Sudden Infant Death Syndrome. Lilly stoically puts one foot in front of the other, which includes Jack’s visit to the mental hospital where he is being treated. A project featuring these two plus Kevin Kline, directed by Theodore Melfi, of Hidden numbers – What could go wrong? Wow. A lot.

With a predictable trajectory and frightening metaphors, Starling is so sentimental that it makes the typical tearful man look like a black man. Despite the lived performances of its three leading stars, this attempt at heartfelt drama is hopelessly in the numbers.

Here are some of his numbers:

References to the Three Stooges: a. Lilly, exhausted from her job in a grocery store and the long drive to see Jack, doesn’t face her own grief. When one of Jack’s therapists refers her to a doctor, Lilly hears her name and says, “Larry okay? Like the Three Stooges? Yes, and thanks to McCarthy’s skill, the line provides the only laugh in a movie whose other attempts to tone it down are so leaden that they include one of Jack’s other patients (Loretta Devine) creating an emoji. poo in pottery class. Larry (Kline) turns out to be a former human therapist but now a vet, who nonetheless befriends Lilly. Irascible at first, of course he turns out to be tender at heart.

Number of extended and heavy metaphors: two, and they are both clichés. The title starling is a bird that continues to bombard Lilly and hit her on the head as she works the neglected vegetable patch in her large yard. The bird won’t stay away and will eventually build a nest, in case anyone misses the fact that the bird is like Lilly and it’s a story about life after grief. No need to wonder if this metaphorical garden will grow.

Number of edits played while we hear pop songs: a whopping five. One montage shows Lilly in the garden at work, another cleaning the baby furniture in her daughter’s room. Two songs are by Brandi Carlile, and they’re all quite enjoyable, but the technical overload comes close to making it a mourning musical. Besides the montages, Benjamin Wallfisch’s score features tingling and sweet melodies as Lilly watches the empty manger and the music flies when the starling, yes, flies away.

McCarthy, who can be fantastic (The heat, Can you ever forgive me?) has often been much better than its material (The life of the party, Super intelligence, Thunder force). Once again, she proves that she can do anything but save a well-worn script. Unlike a lot of comedic actors who abuse drama, she makes a simple glance or a revealing change of expression.

Kline and O’Dowd join her in deserving so much better than this. Lilly and Larry’s scenes are effortlessly acted out even when the dialogue is gruesome. “You can’t scare him too easily,” Larry said of the tenacious Lilly-like starling. O’Dowd is one of the more natural actors around, and he’s heartbreaking at times here, unable to say his daughter’s name without being overcome with anger, but his scenes are too brief. The three characters follow a trajectory so obvious and mundane that it precludes any real emotional connection with them or with the deeply serious premise of the story.

Melfi obviously knows how to build a neat, visually bright and crisp movie, and most importantly how to throw it. Daveed Diggs as a hospital attendant and Timothy Olyphant as Lilly’s unfriendly boss are lost in tiny roles. Corn Starling shares Melfi’s easy sentimentality Saint-Vincent, (with McCarthy and Bill Murray, with O’Dowd in a small role) rather than the invigorating freshness of Hidden characters. Melfi wrote both of these films, but this screenplay is by Matt Harris. He was on the blacklist in 2005 and sort of became that dud.