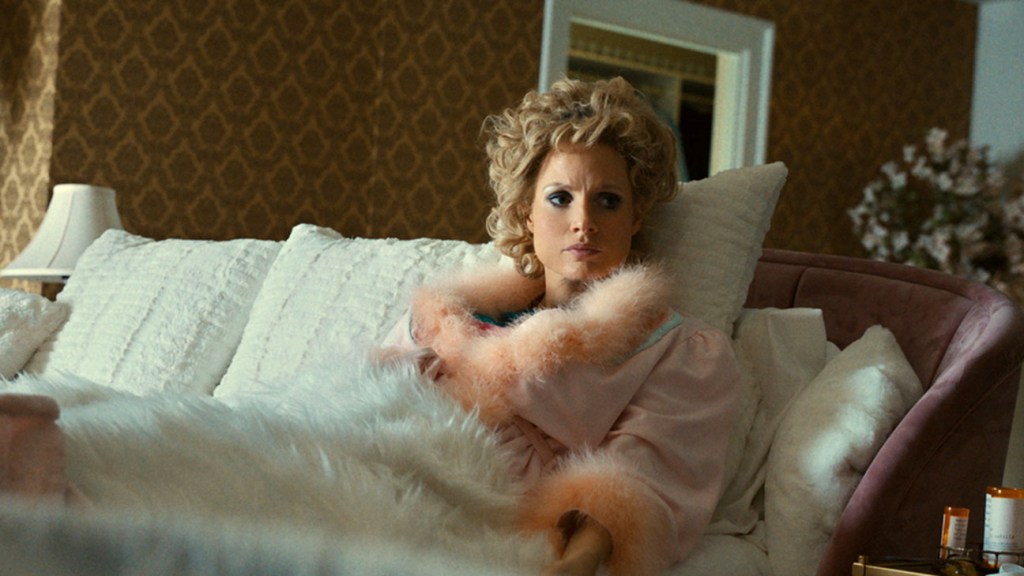 The Juicy 2000 documentary by Fenton Bailey and Randy Barbato, Tammy Faye’s eyes, did an excellent job of capturing the singular uniqueness of a 1980s camp icon, raising questions about how well Televangelical Empress Tammy Faye Bakker was aware of the irregularities that led to the conviction and the imprisonment of her husband Jim for fraud. Michael Showalter’s garish and garish drama adaptation adds little to this narrative beyond providing a showy showcase for the cartoonish performances of Jessica Chastain and Andrew Garfield. Identity wear in search of nuance, they fail to humanize these controversial figures, rarely going as far as their makeup.

Showalter’s The big sick remains an exemplary balance between comedy and sentiment, sincerity and compassion, in large part thanks to the very personal investment of star Kumail Nanjiani and writer Emily V. Gordon, whose film slightly romanticizes the complicated romance. But the director demonstrates here that he’s as good as his material, struggling to extract an ounce of truth from a pedestrian script by TV screenwriter Abe Sylvia (Nurse Jackie, Dead to me). Connoisseurs of performance gadgets might be drawn to the Searchlight version, with its layers of prosthetic and digital disguise. But anyone who needs a new perspective or a reason to care should look elsewhere.

What is most maddening Tammy Faye’s eyes This is the opportunity he wastes to go back to the roots of the Reagan era and really take a long, hard look at how the evangelical right achieved such a political stranglehold on America. There is a brief scene near the end in which Christian conservative heavyweight Jerry Falwell Sr. (Vincent D’Onofrio) presses the Bakkers to join the coalition, or “keep the evangelicals in the tent” , as he puts it, while stressing the importance of a Republican White House for the movement. And vice versa. But there is no bite in the film’s political observations.

As far as politics is taken into account, it is largely at the service of Tammy Faye’s strange beatification. To be fair, this portrait celebrates an independent-minded woman determined to do things her own way. She refuses to remain humbly docile, pulling a chair to weigh in when Jim takes a seat at the table with Falwell and the other great evangelical chewer of the time, Pat Robertson (Gabriel Olds). And her insistence that God’s love does not discriminate, calling for acceptance from the LGBTQ community and performing an emotional TV interview with a gay pastor with AIDS (Randy Havens), puts her at odds with the hard intolerant.

It’s refreshing when Tammy Faye bristles to hear about God’s fight against “the liberal agenda, the gay agenda, the feminist agenda,” and responds by reminding us that America is also their country. She refuses to go into the business of deciding who will go to hell.

But in other ways, the film characterizes Tammy Faye as borderline simple, with her goofy laugh punctuating every sentence and her “God loves you!” affirmations even when the justice of the evangelical movement is called into question. Chastain does her best, but although she makes Tammy Faye vulnerable, she can’t make her interesting. At least not more than a few minutes at a time. If Sylvia’s script had already pulled back long enough to make it seem like the Bakkers were examining the ambiguities and ethical contradictions in what they were doing, it might not have been.

Rather than accessing the main character as a human first, the film opens by going straight to the freakazoid physical appearance. Tammy Faye sits in a larger-than-life close-up TV studio makeup chair and informs the invisible person tasked with getting her camera ready that eyelashes and lips absolutely never come off. So the first impression of her, which never really evolves, is that she is a RuPaul’s Drag Race competing with a Bible instead of a sense of irony.

Then, just in time, the action returns to his early 1950s childhood in International Falls, Minnesota. The eldest of eight children, Tammy Faye (Chandler Head) was the only one born in the first marriage of her harsh mother, Rachel (Cherry Jones, who deserves better), making her the dark spot of divorce personified. In fact, Rachel was only allowed to return to the Pentecostal Church because she knew how to play the piano. She certainly doesn’t want Tammy Faye showing up during services to remind people of this past shame, although she does, entering defiantly and embarking on a miracle “speaking in tongues” moment with her first sip of wine. sacramental.

Chastain steps in as Tammy Faye in 1960, when she meets her classmate Jim at North Central Bible College in Minneapolis. Her fervor instantly strikes a chord with her, especially her rejection of that old “blessed be the poor” stupidity in favor of Christ wanting eternal wealth for his crusaders. For a young woman who ends up acquiring more expensive furs than anyone in the South, that sounds good. Plus, she’s so busy beaming that she barely seems to care when a religious instructor casually calls her a prostitute because of her industrial strength makeup.

The story unfolds with all the stylistic invention of a Wikipedia entry. Tammy Faye and Jim get married, which is against North Central rules, forcing them to give up. They begin to travel the Evangelical Circuit, where Jim plans to earn enough money to start their own church. His usual overspending is evident early on, however, when his inability to make payments on an expensive convertible leaves them stranded.

But – hallelujah! – their hotel room neighbor is a fan of Jim’s folk sermons and Tammy Faye’s cutesy puppet shows; he happens to work on Robertson’s production team at the Christian Broadcasting Network, giving the Bakkers a foot in the door of evangelical television. Like a Bible-beating Eve Harrington, Jim soon manipulates Pat into giving him his own late-night show, and the show is still going on. 700 Club was born.

The Bakkers experience a meteoric rise over the next five years, establishing the Praise the Lord (PTL) network and studios in North Carolina, investing in their own satellite and eventually launching plans for a Christian theme park called Heritage USA. .

But there are problems in Heaven when Jim becomes too busy growing the business to give Tammy Faye the attention she needs. Watching him wrestle on the ground with their business leader, Richard Fletcher (Louis Cancelmi), his desire barely suppressed, does little to calm his nerves either. (Garfield’s stereotypical ways are hard to accept.)

All the flashy jewelry and mink jackets in the world are no substitute for her man’s love, so Tammy Faye starts taking pills, collapses on the air, and briefly falls into the arms of a soul music producer. from Nashville with a Kenny Loggins (Mark Wystrach) vibe, a transgression for which Jim makes her repent live on TV. And as creditors draw closer, the secular press publishes negative reports of the Bakkers appropriating tax-exempt church funds for their personal use.

OK, this all really happened, so the filmmakers can’t be faulted for extending their credibility. But it is told with an unwavering seriousness that frequently turns into soapy melodrama and, elsewhere, zany pantomime. With sticky wigs. The inevitable downfall of the Bakkers – with D’Onofrio’s opportunist Falwell offering help only to sell Jim and take control of PTL – might perhaps surprise one or two people who remain blind to the hypocrisies of the evangelical movement and do not not know the spectacular of the couple. implosion. But others are more likely to wonder what we are supposed to have learned from two painstaking hours in their irritating company.

Chastain throwing herself into Tammy Faye’s disco era in a glitzy outfit might be good for a GIF or two. But the film, with its numbing overload of pastels and prayers, is too tonal-uncertain to be entertained. It’s a depressing window into the worst excesses of the faith racketeering that doesn’t have much to offer in terms of commentary.

The main cast certainly commit to their roles, as Tammy Faye and Jim seem to have even brainwashed themselves into believing their morals are impeccable. But not for a second did I feel an emotional connection with these characters; the only “Glory to Jesus!” moment was when the end credits finally rolled.