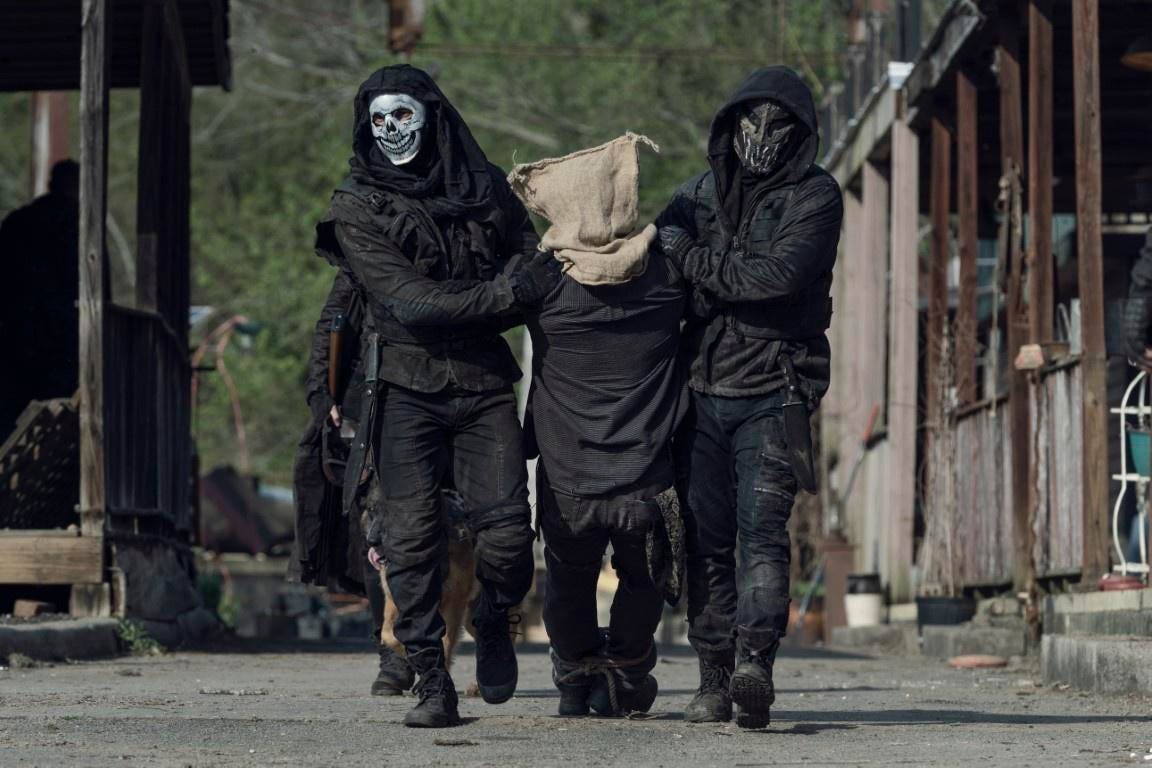 In season 4 of The walking dead, Daryl is separated from the group and ends up reluctantly joining a new group of marauders led by a guy named Joe.

Hi Joe. Where are you going with that gun in your hand?

I didn’t know it at the time, but these guys were called The Claimers, because in The walking dead each group needs its own group name. The Claimers, The Whisperers, The Saviors and now The Reapers.

It turns out the Reapers look a lot like the Claimers, only more fanatic and violent and. . . absurd. And they wear silly masks and attack people on sight.

Their leader is called Pope and he looks like a fanatic version of Negan. He even throws one of his henchmen in the fire because the poor guy ran away from a fight, just like Negan did with the doctor. Because that’s what makes a really well-designed villain. They throw one of their only fighters into the fire because they had the audacity to retreat.

Maybe if the fight scene from last week’s episode had a decent choreography, it would all work better. Maybe not. Either way, these new Reapers aren’t that new or original. The new villain, like the old villain. New coat of paint.

Daryl and Leah sitting in a tree

There is a lot of talk about Daryl’s reunion with his long lost love, Leah, a character who was only in a previous episode that I suspect a lot of viewers probably skipped because it was just a bonus episode linking seasons 10 and 11 of filling, essentially, but with nothing to fill.

Leah was a meh character in this episode and the romance was anything but. When Daryl says I never lied to you, Leah. I’m not about to start now, it feels empty and undeserved. If it had been an established character if Carol had somehow, over the past two seasons, become a Grim Reaper, then everything that followed would have teeth.

Instead of The walking dead gnaws at us with the gums, whatever the story that is close to his heart with the last seasons misplaced. Who cares about Lea? Clearly not Daryl, so why should we? She makes him talk and he takes her for a walk. She wants him to be inducted into the cult of the Pope’s veterans and it works: their room is set on fire and Daryl thinks he has to save Leah, but she gets involved. Miraculously, he’s able to smash glass and escape, for apparently such an obvious solution is both brilliant and courageous.

Why do we always do this same stupid shit?

Whatever exciting or tense moments this episode might have had, they were robbed of any seriousness by the fact that 99% of the characters were new and disposable and essentially irrelevant and the only significant character in the equation was plot armor as thick as a redwood. Daryl will be fine and we know that and that makes our connection to an episode like this shaky at best.

What is missing this season, at least so far, is a sense of real danger or high stakes. This is the final season of the entire series, but it feels quite secure in a way that previous seasons have never felt. Whatever tension we run into, it is too artificial and predictable to matter much. Oh, are they waterboarding for Daryl? Yeah, damn it. He and Carol have a spin-off! It will be like WandaVision but worse.

Introducing new villains so late in the game and making them count requires a level of skill that is clearly lacking in current writers and producers. The Reapers and the Commonwealth (who will enjoy it more next week) both feel a lack of cartoonishness that is all the more apparent after a season and a half of the horribly implausible Whisperers.

Can we at least try to get some realism back, please? Wasn’t that what made this show so popular in the first place that it was a down-to-earth, down-to-earth, character-driven TV show about the zombie apocalypse?

There’s a little bit of me thinking, Hey, why don’t you just skip the shark all the way at this point? Go full Fear the living dead and detonate nuclear weapons or something.

That or come up with new conflicts that don’t feel like a rehash of better (or at least older) seasons.