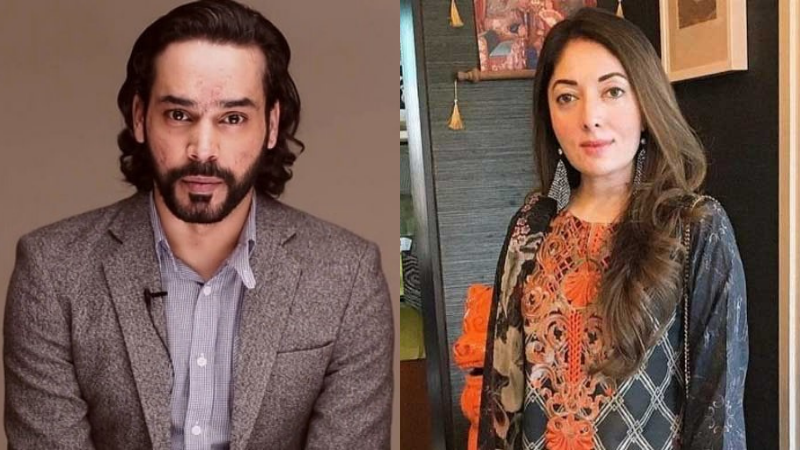 The actor had posted a message on Instagram to address a slap scene from his drama Laapata which was widely shared on social media. The actor posted that the reason he took on the role of Daniyal in the drama was to “prove that oppression is a choice.” “If an insecure man with his fragile ego tries his ‘so-called’ muscles, make the choice that Falak made without any fear,” he wrote. “A tight slap from a brave woman to such a weak man in our society would be a giant leap for women.”

Drama series Laapata is currently broadcast on Hum TV and stars Rasheed, Sarah Khan, Ayeza Khan and Ali Rehman Khan. In a previous episode, Rasheed’s character Daniyal received a slap in the face from Falak (played by Sarah) after slapping her.

Faruqi responded to Rasheed’s message, saying oppression is “not a choice”. “It’s a harsh reality,” she wrote. “Thousands of women are oppressed daily not because they chose to be oppressed but because they have no choice to fight back or leave. Marital rape, domestic violence, victims of acid , child marriage is rampant because the victims are physically and financially powerless. They suffer in silence and those who find the courage to fight back are either silenced, murdered or divorced with nowhere to go. Victim blame never stops, it’s a vicious cycle. “

Rasheed then responded to Faruqi’s comment via his Instagram story. “With all due respect, ma’am. So how do we break this vicious cycle? If thousands of women are oppressed daily, how can we change this reality? He asked.

“The main reason women tolerate all this injustice is because of the fear, norms and taboos that have been created by our simplistic society. And now that fear is becoming a state of mind for these women and the only one thing that can change this state of mind is an idea, an idea not to be oppressed, tolerant or not to fear any injustice or abuse from the weak men of our society, ”explained the actor.

“The” slap scene “depicts a woman defending herself and saying no to violence, which is a step towards breaking this vicious cycle. Oppression is a choice, an idea for the next generation where no woman should only accept being mistreated or oppressed due to societal norms and if she tolerates being oppressed then it is her choice and no longer a state of mind, “he wrote.

The “slap scene” sparked controversy on social media after it aired. While many supported the scene as a much needed portrayal of a woman defending herself, there were also those who criticized the scene and said violence in any form should not be tolerated.

What Rasheed doesn’t seem to understand is that by saying that “oppression is a choice” he makes it seem like women are choosing to be oppressed. Not everyone has the ability to slap their attacker and walk away. Many victims have nowhere to go and have few or no options for supporting themselves. While a crunchy slap makes a great TV, it doesn’t always work in real life.

We appreciate the feeling behind her words that people should resist abuse, but the victim is not always in a position where she can stand up without consequences. To say that the victim chooses to be oppressed is to blame the victim. What Faruqi says carries weight, not everyone has the opportunity to fight back and it is important that people understand it.