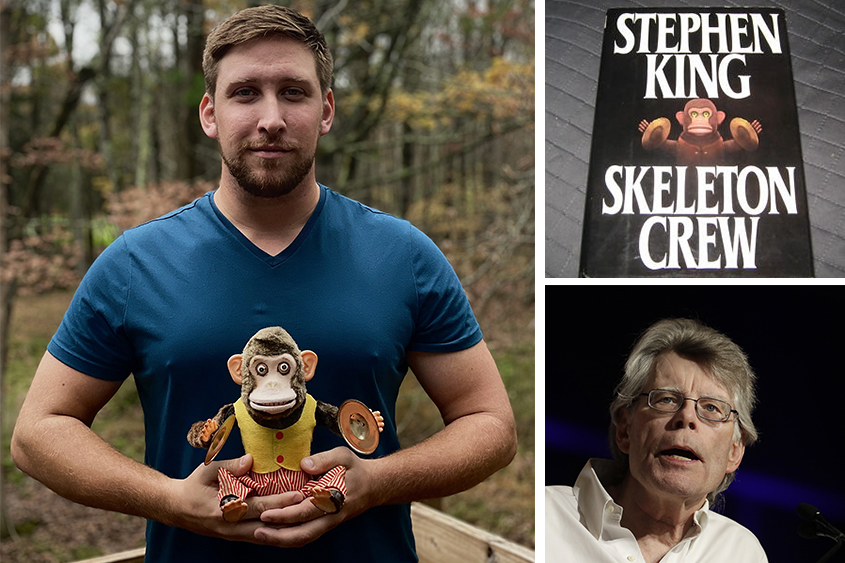 Sometimes it pays to play by the rules. Other times it is worth pushing against them.

Saratoga filmmaker Spencer Sherry intended to do the former but ended up doing the latter with his latest venture; adapting a spooky short story by Stephen King called The Monkey.

During the pandemic, Sherry wrote a film script with the intention of submitting it to the Kings Dollar Baby program, in which the author grants students and aspiring filmmakers permission (for $ 1) to adapt some of her short stories. . The catch is, they can’t take advantage of their movie adaptations. Several famous directors and filmmakers, like Frank Darabont (The Shawshank Redemption, The Green Mile) made their debuts thanks to the program.

I heard about this program a few years ago from a friend who did it, and I felt like one of his news was available, Sherry said.

It turns out The Monkey was not part of the program, although Sherry only found out after writing the script. At first he decided to put it aside, but he returned to the script this year and decided to see if anything could be done with it.

I like my idea for it, I like the story. I’m a huge Stephen King fan, that’s how I got into this, Sherry said.

He contacted Kings Agent and presented his adaptation of the story.

[I] first asked for a real business option, Sherry said. This was quickly denied.

So I said, “Okay I know I’m not supposed to ask and it says on the website not to ask, but could I extend the Dollar Baby contract?” “… I just want to do this because I love the story.

The next day, the contract landed in his inbox, along with a note from Kings’ assistant explaining how unusual it was for King to grant these rights for a story outside of the usual stories available for the program. Dollar Baby.

According to Sherry, Darabont once had the rights to the story, but let them expire and this will be The Monkey’s first film adaptation.

The aspiring filmmaker does not take this opportunity for granted. Sherry, a native of Oneonta who dated SUNY Albany, worked in the industry in New York City for about a year before moving to Saratoga in 2017. He worked as a production assistant on films like Set It Up with Zoey Deutch, Glen Powell, Taye Diggs, Lucy Liu and Pete Davidson.

The Monkey, which was published as part of Kings Skeleton Crew’s book, marks the first time Sherry has adapted an author’s story. He was interested in it because of the duality of the story.

Kings’ story follows a young father, Hal, whose two children find a monkey that strikes cymbals and haunted him as a child. Every time the silver cymbals sound, one of his relatives dies.

In the adaptation of Sherrys, the script has advanced a bit; the two children (Dennis and Pete) are adults and Pete is about to have his first child. As he deals with all the angst that comes with it, there are also flashbacks to the horrors of the monkey seen in Kings history.

It’s a unique opportunity to be able to make this story my own and be a part of it almost like a sequel where I kind of show where these characters ended up 20, 30 years after the original story, and so it’s is interesting in trying to balance the work of Kings and the themes of his story, Sherry said.

To create the film, he teamed up with Colony director Joe Gietl, who recently released A Void, and will produce The Monkey.

Their objective is to keep the adaptation as local as possible, calling on local businesses, local actors, artists, etc.

It’s also something that I really want to do with the people of the capital region and with the peers and industry professionals who are in that region. I love that a lot of people are working in this field and I want to make this experience as collaborative and engaging as possible, said Sherry.

My goal is to support and work with passionate filmmakers who have unique perspectives and stories to tell, ”said Gietl. “Working with Spencer on this project fits this bill to a T. There is a growing youth movement of motivated local filmmakers that we are excited and proud to be a part of and our goal is to continue to support, promote and ultimately bring this community closer with this film.

They launched an Indiegogo campaign to raise money for the Halloween movie and raised over $ 13,000 of their goal of $ 35,000. The campaign is expected to run until January 6.

If all goes as planned, filming will begin in May. In the meantime, Sherry will search for locations and contact other members of the local film community with whom to collaborate. Finally, once the production is finished, hell will be able to screen it in certain film festivals and cinemas. Hell also sent a copy to King, who reportedly watched the films from each Dollar Baby contract.

It’s just an amazing opportunity that could kick off [my] career, said Sherry.

To learn more about the project, visit indiegogo.com.

Not sure if I’m a guest at Vicky Kaushals wedding, says co-star Amey Wagh | Bollywood

Subconsciously, the public sector attracts the most in the Hollywood Derby