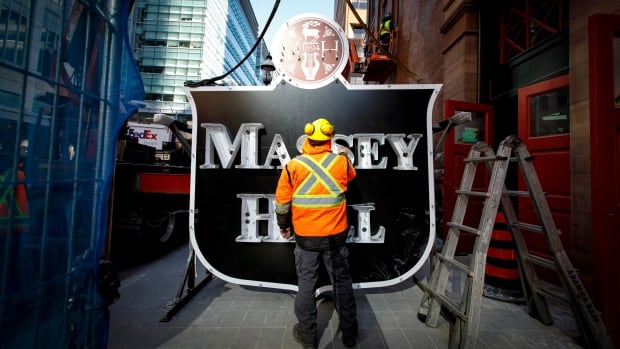 Jim Cuddy couldn’t hide his excitement when he got his first glimpse of the newly renovated Massey Hall this week.

“It’s so amazing. It’s beautiful,” he said, stepping out on stage.

Blue Rodeo songwriter, singer and guitarist was on a private tour of Toronto’s iconic concert hall with Massey Hall CEO Jesse Kumagai and CBC’s Eli Glasner. It was three days before the Nov. 25 reopening, and construction workers and sound engineers were still setting up seats and installing equipment to prepare the venue for the first audience since it closed for renovations in June 2018.

“I can’t wait to play here,” said Cuddy, whose band has performed in the legendary venue dozens of times. “I can’t wait to see someone here. I feel like they’ve got an amazing shine, but it’s not that different.”

WATCH | Jim Cuddy learns for the first time about the results of the Massey Hall refurbishment as the project draws to a close:

Jim Cuddy of Blue Rodeo sees the legendary Massey Hall in Canada for the first time, after three years of intensive renovations. The hall is dear to Cuddy’s heart, as a musician and a fan. 0:33

From the scene, the feeling may be familiar to Cuddy, but a lot has changed.

All-new floor seats are now retractable, allowing general admission to certain shows. The stained glass windows covered with plywood from the early 1900s have been carefully restored. And the plaster ceiling, once covered with dusty wire mesh to protect the public from falling debris, has been precisely repaired.

The stage has also been completely reconstructed and the entire ground level has been raised, bringing the stage closer to the balcony and gallery seating. All of this had to be done without affecting what many call the magic of Massey Hall.

“We wanted to make sure we weren’t doing anything that would change that for the audience,” Kumagai said.

The goal of restoring a 127-year-old building, preserving its character while modernizing it to suit today’s needs, was a monumental task that was carried out not only under the scrutiny of government ministries. Heritage and building inspectors, but also many of the best musicians and music historians.

Industrialist Hart Massey commissioned the hall in 1894 as a gift to the city of Toronto. The world famous building is steeped in history and traditions.

It was built primarily for musical performances and has hosted large and varied ones, from Enrico Caruso to AC / DC to Tanya Tagaq.

He is also known for his live recordings of historical significance, including The greatest jazz concert of all time, Neil Young: Live at Massey Hall and Rush Everyone is a stage.

It housed the Toronto Symphony Orchestra for 60 years. Massey Hall has also hosted political rallies and even sporting events such as wrestling and boxing.

There were times when the room was considered obsolete and narrowly escaped the chopping block.

However, Massey Hall was designated a national historic site in 1981, thus protecting its heritage.

The chief architect of the revitalization project, Marianne McKenna, was keen to build on this whole story.

“We started with clear instructions from the musicians who love this place: fix everything. Don’t change a thing,” McKenna said.

“It quickly went by the wayside. We had to improve everything on the spot.”

Anyone who has been to Massey Hall knows that one of the worst parts of the experience was the limited number of bathrooms and their location in the basement. This was resolved by constructing a tower at the rear of the original structure, made accessible through exterior corridors known as passurels which now protrude from the side of the building.

“It’s something that was started in the ’60s,” McKenna said. “I don’t know where they thought they were going then because there was nowhere to go.”

Now, with the seven-story tower attached to the south side of the building, the passurels lead to brand new bathrooms, a bar (almost finished), and elevators that make the lobby accessible to many who had never been able to. sit on the balcony before. or gallery levels.

The tower also contains another performance hall to complete, rehearsal spaces and the Deane Cameron Recording Studio, named after the former CEO of Massey Hall who died suddenly in 2019.

The bar in the basement of the original structure has been completely renovated and will soon also be used as a small performance space.

The ongoing revitalization project is priced at $ 184 million. It is funded by all three levels of government, as well as private donors and businesses.

When asked what the biggest personal challenge in the Massey Hall Revitalization Project was, McKenna basically said it all.

“I am a contemporary architect,” McKenna said. “You know, we do things in a very contemporary way, but to recognize and respect history, to try not to change it but to increase the feeling of being here. To improve it. It’s a big challenge. for an architect. “

Massey Hall will open to the public on Thursday, November 25, with seasoned artist Gordon Lightfoot taking the stage. Lightfoot has performed in the hall over 165 times.

Over the next few months, it will be up to audience members and musicians to decide whether Massey’s team has achieved its goals. But for Cuddy, the verdict is already in.

“I was ready to accept it as something new and put my memories together of what it was,” he said. “But I think it pairs beautifully with what I liked about it.”

Watch full episodes of The National at Gem of Radio-Canada, the CBC’s streaming service.

Virendra Saxena, former NSD student, has not only worked in Bollywood but in many Hollywood films including White Rainbow!