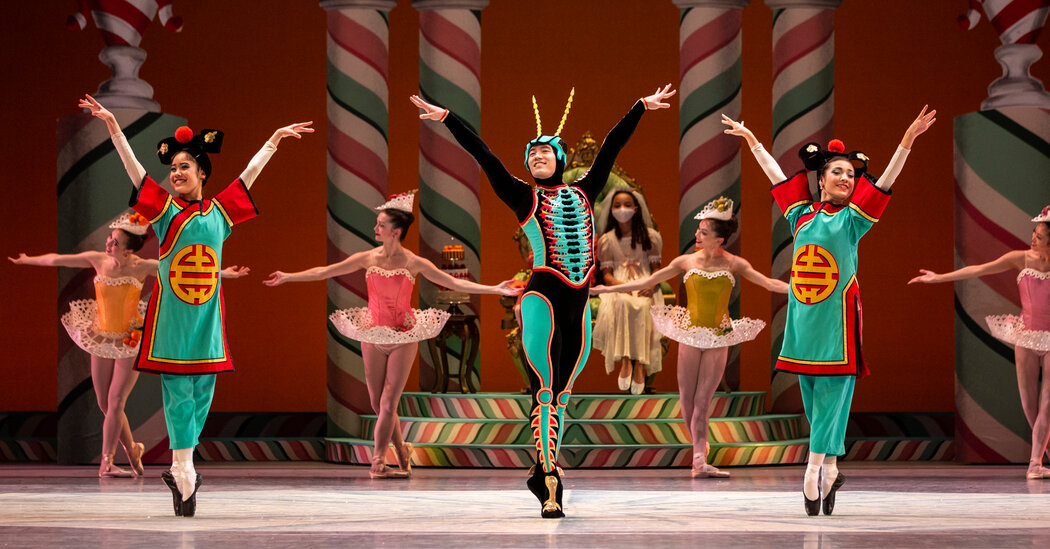 A new character is featured this year in Land of Sweets in Pacific Northwest Ballets Nutcracker: Green Tea Cricket, an elastic superhero-like figure meant to counter stereotypes in Chinese culture.

Tulsa Ballet, hoping to dispel outdated representations of Asians, imbues its production with elements of martial arts, choreographed by a dancer of Chinese descent.

The Nutcracker, the classic holiday ballet, is back after the long pandemic shutdown. But many dance companies are reworking the show this year in part in response to a wave of anti-Asian hatred that intensified during the pandemic, and a broader recognition of racial discrimination.

Everyone has learned a lot this year, and I just want to make sure that there is absolutely nothing that can ever be considered insulting to Chinese culture, said Mikko Nissinen, artistic director of the Boston Ballet, who has choreographed ribbon dance. We look at everything from a diversity, equity and inclusion perspective. This is the way of the future.

Artistic conductors drop items such as bamboo hats and pointed finger movements, which are often exhibited during the so-called tea scene in Act 2, when the dancers perform a short routine featuring Chinese tea. (This is one of a series of national dances, including Hot Chocolate from Spain and Coffee from Arabia.)

At least one company, the Berlin State Ballet, has decided to forgo the Nutcracker entirely this year due to growing concern over racist portrayals of Asians. The company said in a statement last week that it was considering ways to recontextualize the ballet and eventually bring it back.

The changes are the result of a multi-year effort by artists and activists to bring attention to Asian stereotypes in The Nutcracker. Several years ago, some renowned groups including the New York City Ballet and the Royal Ballet in London made adjustments to the tea scene, eliminating such elements as Fu Manchu-type mustaches for male dancers.

The sharp rise in reports of anti-Asian hate crimes during the pandemic, along with the recent emphasis on the legacy of discrimination in dance, opera and classical music, have brought new urgency to the effort. .

Performers and activists called on cultural institutions to put more emphasis on Asian singers, dancers, choreographers and composers. Some opera companies are re-examining repertoire staples like Madama Butterfly and Turandot, which contain racist caricatures. Others, like the Boston Lyric Opera, organize public debates about the works and their stereotypes.

People are finally connecting the dots between the idea that what we put on stage actually has an impact on people behind the scenes, said Phil Chan, an arts administrator and former dancer who pushed for the Nutcracker rethink.

In 2018, Chan began circulating a pledge titled Final Bow for Yellowface, which calls for eliminating outdated and offensive stereotypes in ballet. It has collected approximately 1,000 signatures from dancers, choreographers, educators and administrators.

The decision to exclude racist elements from dance was not without controversy, especially in Europe.

The Scottish Ballet eliminated cartoons like nods and ponytails from their Nutcracker this year. The production also breaks with tradition by having both male and female dancers play the role of magician Drosselmeyer.

We ended up in a place where we can celebrate what was being put on rather than trying to defend it, said Christopher Hampson, artistic director of the Scottish Ballet.

But some observers were not happy.

How racist is it to portray the most recognizable attributes of a culture? said one remark about the new production, which aired in November on Russian state television. In 2021, even the ballet is not immune to the police of the PC.

The Berlin State Ballet’s decision to skip the Nutcracker this year has angered some cultural critics, who have raised concerns about free speech.

People aren’t stupid, Roger Kppel, former editor of Die Welt, a German newspaper, said in an email. They can think for themselves and do not need to be shielded from art that is declared politically incorrect by people who want to impose their worldview on us all.

The stakes are high. For many ballet companies, The Nutcracker is the biggest show of the year, a financial lifeline that generates a significant percentage of annual ticket sales.

Dancers and artistic leaders said reinventing the Nutcracker was key to attracting a diverse audience. But some said there was still room for improvement.

KJ Takahashi, a dancer with the City Ballet who performs in this year’s Nutcracker tea scene, which opened the day after Thanksgiving, said he welcomed the changes. Takahashi, who is of Japanese descent, said the revisions made him feel more included. Still, he said, there was more to do, noting that he finds the costumes dated and inauthentic.

The little things make a big difference, he said. We can go even further in precision.

The Colorado Ballet staged The Nutcracker this month with new costumes, including in the tea scene. The rainbow colors of a dragon appearing on stage are inspired by Asian street food.

Some companies are reworking the tea scene entirely, believing that more can be done to resonate it with modern audiences.

Peter Boal, artistic director of the Pacific Northwest Ballet in Seattle, has been experimenting with ways to tone down Asian stereotypes in his Nutcracker since 2015. But as Boal saw the rise in anti-Asian hatred this year, he decided to make new changes in opening time, November 26.

He had long wanted to add a cricket, a symbol of luck in China, to The Nutcracker. Just a few weeks ago, he obtained authorization from the Balanchine Trust, which owns the rights to the version produced by the company. (The trust found the early sketches too bug-like, Boal said.)

During the visit to Candy Land, the cricket now emerges from a rolled-up box on stage and performs a series of acrobatic movements, much like the choreography in the original, in which a man dressed in stereotypical Chinese clothes steps out of the room. box.

The importance of change really came through this year, Boal said, noting the spread of anti-Asian hatred. He said he wanted a production that matched our sensibilities today and our respect for other people and members of the audience and the community.

At Butler University in Indianapolis, professors and students found themselves increasingly uncomfortable with national dances, which they believed to be reduced to cartoonish cultures. This year, they renamed the tea scene Dragon Beard Candy, after a favorite Chinese candy. The choreography of the scene is partly inspired by the Monkey King, a mythical warrior animal from classical Chinese literature.

You might not be concerned with these issues because you don’t have to be, said Ramon Flowers, an assistant professor at Butler who choreographs parts of the production. But by highlighting it and spreading it as often as possible, we can inspire change.

Ma Cong, resident choreographer at Tulsa Ballet, said he was confused when he first saw Nutcracker productions featuring overdone make-up and stereotypical costumes. Ma, who grew up in China, recalled thinking: This is not Chinese.

The Tulsa Ballet will present on December 10 a production of The Nutcracker choreographed by Ma and Val Caniparoli. For the tea scene, Ma incorporates elements of tai chi and classical Chinese dance.

Ma said the rise in anti-Asian violence and the spread of terms such as the Chinese virus have encouraged him to bring more elements of Chinese culture to the production.

It’s a simple word: respect, he said. It is really important to respect all cultures and be as authentic as possible.

Schenectady’s wife stole more than $ 3,000 in merchandise from Clifton Park Boscov on Friday – The Daily Gazette