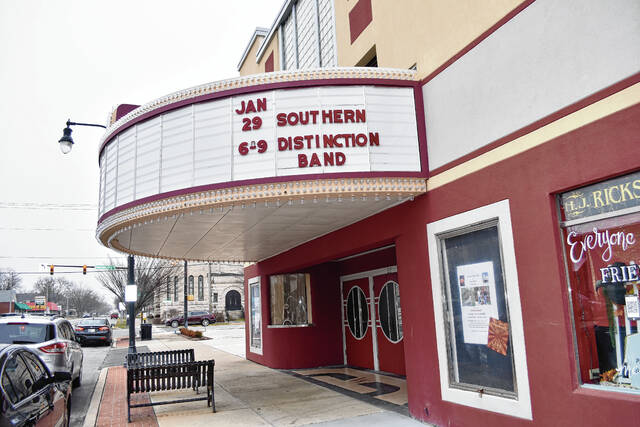 GREENFIELD — The HJ Ricks Center for the Arts may soon be showing events on its marquee every weekend — at least if its new event scheduler is successful.

Tony Seiler, the longtime owner of Greenfield Music, said he recently signed a three-month contract to program events at the historic theater.

Seiler has a rich history playing and promoting music in the region. He is an active part of his music store and he plays in three bands. Last year he began booking concerts for 2022 for the Greenfield Parks department for Depot Street Park’s new concert lineup. He also oversees Riley Festival’s entertainment programming.

Seiler has already booked two bands to play at the Ricks Center, 122 W. Main St. But he says the old movie theater, which is owned by the nonprofit Hancock County Visitors Bureau, is a fantastic venue for much more than simple gigs.

“We’re going to do movies, plays, dance recitals…all that kind of stuff,” he said. “My goal is to be able to use it every weekend, but it will take a bit of time to get it up and running.”

Theater Manager Dave Scott has been in charge of event bookings at the theater for years. His status is unclear.

Scott and Seiler referred questions about the arrangement to Sarah Kesterson and Sarah Wolf, members of the Board of Directors of the Visitors Bureau. Neither responded to requests for comment.

Like entertainment venues everywhere, the Ricks Center has been hit hard during the pandemic. Local theater and performing arts groups, which made up a significant portion of the theater’s bookings, have taken a break and only returned to the stage in recent months. The new arrangement will help the theater diversify its programming. It is also designed to help bring more people to downtown Greenfield, which has long been a goal.

The owner of at least one nearby business can hardly wait.

“This theater has such potential to be used more to bring people to our beautiful downtown,” said Jayne Hoadley, whose Greenfield Chocolates shop is a few windows east of the theater on the other side. from Main Street.

“People love this theater, and holding regular events there would be absolutely brilliant,” she said.

Retta Livengood, president of the Greenfield Area Chamber of Commerce, said a reinvigorated effort to increase theater use was a good idea.

“While I don’t have first-hand knowledge of how many days the Ricks have been used in the past, it will be exciting to see refocused efforts for this downtown gem,” she said. declared.

Livengood said the historic theater can be a great asset, especially for the downtown shopping district.

“It could be an attraction to bring other people into our community…Hopefully at some point someone could be the point person to keep the facility in use,” she said.

“I would assume it would take a full-time person who constantly helps educate everyone about the amenities of the Ricks, (for) not only music and entertainment, but also community meetings, debates, strategic planning And much more.”

Seiler believes the theater, donated to the community by the Strahl family for use as an arts center when their Legacy Cinemas complex opened in the early 2000s, is a historic icon worth nurturing and sharing with the community. audience as much as possible.

“I want it to be a happy and welcoming environment, and we’re working on that,” he said.

The art deco theater was built in 1946. The Visitors Bureau and Scott oversaw a major renovation, and it reopened to great fanfare in September 2006.

In 2020, a nonprofit organization formed to support the theater, Friends of the Theater, raised $35,000 to install a new marquee and lights. Last month, the band raised over $6,000 to install a wheelchair lift on stage.

Longtime Greenfield resident Gwen Betor said she has attended a number of events at the Ricks Center over the years and would like to see the theater marquee lit up several nights a month.

“I’m just amazed by the theater. It’s a wonderful place,” she said.

As a board member of Greenfield Main Street and Greenfield Historic Landmarks, Betor can appreciate how the historic theater is an asset to the city’s downtown shopping district, which is listed on the National Register of Landmarks. historical places.

“The architecture of the theater is just beautiful, and so many people have such fond memories of going there over the years,” she said. “It’s such a great piece of history right downtown. I think it’s a wonderful goal to have something there every week or every weekend.

Debra Smith, executive director of Greenfield Main Street, agrees that a vibrant theater can be a boon for the downtown area.

“I think (booking regular events) can only be positive for the downtown community and businesses. With regular events, this will bring more people downtown, which will hopefully equate to more money being spent locally in our restaurants and stores,” Smith said, adding that she would like to plan more events. of Greenfield Main Street events at the theatre.

“I know that when we were showing holiday movies (at the Ricks), several people said they wished it was used more often,” she said.

Seiler has no doubt that the Ricks can be as popular as other nearby small town theaters – like the Artcraft Theater in Franklin and the Strand Theater in Shelbyville, both of which host a rotating lineup of vintage films, comedians and other entertainment.

The Greenfield Theater is also an ideal venue for weddings, conferences and private parties, he said.