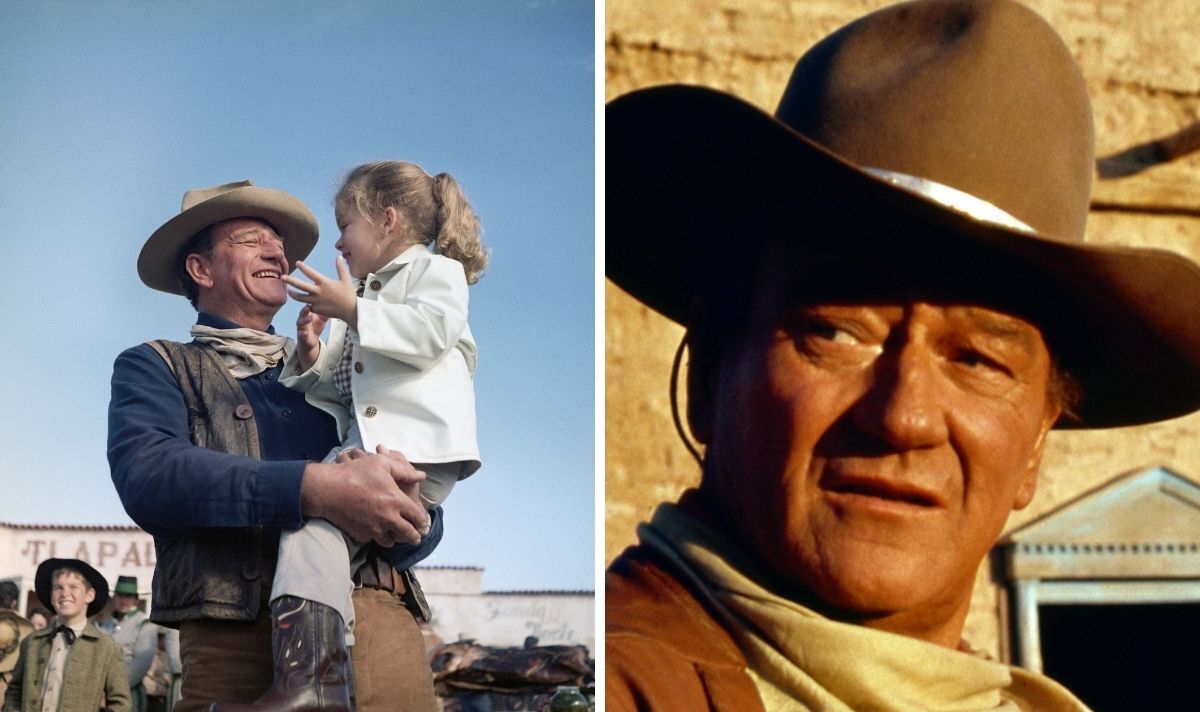 The War Wagon: John Wayne stars in the trailer for the 1967 film

Today Wayne, often known by his nickname The Duke, stars in the epic 1960s historical war film The Alamo, which airs from 1.50pm on ITV4. Also starring Hollywood actor Richard Widmark, The Alamo tells the story of a town of San Antonio in 1836 and the band of Texans aiming to protect it against a group of Mexican troops. The film was nominated for seven Oscars and a Golden Globe, although it failed to win any awards at either event.

Wayne remains one of Hollywood’s most enduring stars, his career beginning in the silent film era of the 1920s, and rising to global stardom over the following decades.

In total, he starred in 179 films and TV productions, and by 1970 he had picked up the Oscar gong he had longed for for his performance in True Grit.

He was so influential that the American Film Institute chose Wayne as one of the greatest male stars of classic American cinema.

Married three times and divorced twice, Wayne had a total of seven children, including his daughter Aissa, who once remembered her last meeting with her father.

John Wayne’s heartbreak: The Hollywood icon’s last words to his daughter on her deathbed (Image: GETTY)

Wayne, often known by his nickname The Duke, stars in the epic 1960s historical war film The Alamo (Image: GETTY)

According to John Wayne’s official Twitter account, Aissa noted how Wayne was “truly a loving father and grandfather”.

She noted how “it was cute to see him with the grandkids” because “he would get all the ‘goo-goo’ and ‘gaga'”, adding, “He was just a happy guy.”

But when Wayne was in his final hours and Aissa held his hand as she patiently sat with him, her daughter noted how much she wanted to know if he still acknowledged who she was.

In his final days, Wayne’s battle with stomach cancer worsened and he died in 1979.

Years before his death, Wayne coined the term The Big C in 1964, to describe cancer.

Due to his condition, Wayne had to have his left lung removed, along with four ribs, and while he was well into his recovery, he continued to smoke and chew tobacco.

As he deteriorated, Wayne was asked by Aissa if he knew who she was.

In his last words, he replied, “Of course I know who you are.

“You are my daughter. I love you.”

While Wayne’s final moments were clearly emotionally charged, his temper was well known in Hollywood during his early years.

This was perhaps best demonstrated in 1973, when Wayne allegedly had to be restrained by security guards as he attempted to remove Native American activist Sacheen Littlefeather from the Oscars stage.

At the time, actor Marlon Brando turned down his Oscar win for The Godfather due to the film’s treatment of Native Americans.

His gesture was also intended to ensure that the events at Wounded Knee, South Dakota, where Native Americans were massacred in 1890, would be brought to light.

But Wayne was furious with the move.

According to Littlefeather, a furious Wayne then tried to drag her off the stage before being restrained by security.

She told the Guardian in 2021: ‘During my presentation he was coming towards me to force me off the stage, and he had to be restrained by six security guards to prevent him from doing so.’

She added: “It all happened so fast when it was announced that he had won.

“So there were two promises I had to keep.”

Michael B. Jordan set to sell his Hollywood Hills home