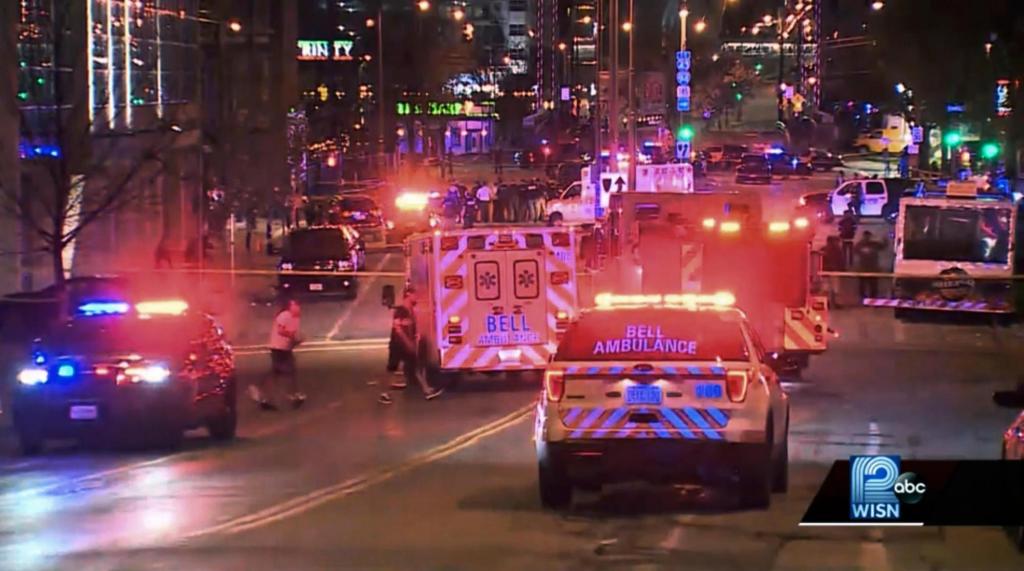 Downtown Milwaukee will be under a limited curfew for the rest of the weekend and a huge watch party scheduled for Sunday has been canceled after 21 people were injured in three separate shootings near an entertainment district where thousands of people gathered for an NBA playoff game.

In one of Friday night’s shootings, 17 people were injured when two groups began shooting at each other. Three people were injured in another shooting and one in the third. All of the shots occurred blocks from the arena where the Milwaukee Bucks lost to the Boston Celtics in Game 6 of the NBA Eastern Conference Semifinals. All victims should survive.

“What makes people think they can just have a shooting on a public street or in an entertainment district whether the police are there or not?” Deputy Police Chief Nicole Waldner asked at a press conference on Saturday.

Mayor Cavalier Johnson said the city has imposed a downtown curfew requiring anyone 20 or younger to leave the streets by 11 p.m. Saturday and Sunday – when the Bucks play Boston in the deciding game 7.

Meanwhile, an outdoor Game 7 watch party that had been scheduled in the Deer District entertainment area just outside the arena has been cancelled. Jeff Fleming, a spokesman for Johnson, said in a text that the team decided to cancel the event “after consultation with the city and public safety agencies.”

Sunday afternoon’s game watch party would likely have attracted more than 10,000 people. The Bucks said 11,000 people attended a Game 6 watch party, even as more than 19,000 others were inside the arena.

“The shootings that occurred in downtown Milwaukee last night were horrific and we condemn this devastating violence,” the Bucks said in a statement. He said the watch party was canceled “to allow law enforcement to dedicate the necessary resources to continue investigating the events of last night,” but noted that businesses in the district of Deer will remain open.

Johnson said those responsible for the shooting will be held accountable.

Waldner said three people, including a 16-year-old girl, were injured in the first shootout at 9:10 p.m., about five minutes before the end of the game. A man was taken into custody.

The shooting happened just outside the boundaries of the Deer District, a 30-acre entertainment district that was developed after the Fiserv Forum opened in 2018. It includes many bars and restaurants where large crowds gather often gather to watch major sporting events or to attend festivals.

Bill Reinemann, a parking lot attendant on land adjacent to Deer District, said he heard gunshots and then saw dozens of people running away.

At 10:30 p.m., a second shooting injured one person. No arrests were made, Waldner said.

Dozens of shots rang out at 11:09 p.m. in the third shooting that left 17 injured. Five of the injured were armed and were among 10 people arrested, Waldner said. Police have yet to determine what triggered it.

“There were a few groups that were exchanging gunfire despite the incredible police presence downtown,” Waldner said. “Officers in District 1 reported bullets whizzing past their heads.”

Jake O’Kane, 25, of Appleton, Wisconsin, attended the playoff game with his girlfriend. Then they saw the commotion of the first shooting, then walked a few blocks away and spent a few hours in bars before deciding to take a Lyft ride to a restaurant.

O’Kane said they were waiting outside for their turn “then all of a sudden you hear the ‘pop, pop, pop’ behind you.”

O’Kane said he heard about 20 gunshots before he was able to capture another 22 on video. He estimated the shots were within a few hundred yards of his group.

When the driver pulled over less than two minutes later, “I said, bro – drive!” O’Kane said.

Milwaukee was among several US cities that recorded a record number of murders in 2021, most involving firearms. The list also included Philadelphia, Indianapolis and others.

Experts believe the stress and pressures caused by the COVID-19 pandemic contributed to the violence. Johnson blamed easy access to guns.

“A central part of the problem is the fact that individuals easily get their hands on guns,” Johnson said. “It’s not strictly a Milwaukee problem. Across the country, we have seen an increase in shootings, both fatal and non-fatal. »

Of Milwaukee’s 193 murders in 2021, 180 were committed by firearm. According to police data, another 873 people suffered gunshot wounds.

This year, the pace is even worse. Milwaukee has already recorded 77 murders, a 40% increase from the same time in 2021. The number of non-fatal shootings this year is 264, two fewer than the same time a year ago.

O’Kane said he’s worried about where Milwaukee is headed.

“Are we going to play another game again, if we win? Yeah, I’m still going to end up going to Bucks games anyway. But are we going to party outside afterwards? Hell no, not a chance.

This story has been updated to correct the age of one of those shot to 30, not 3.