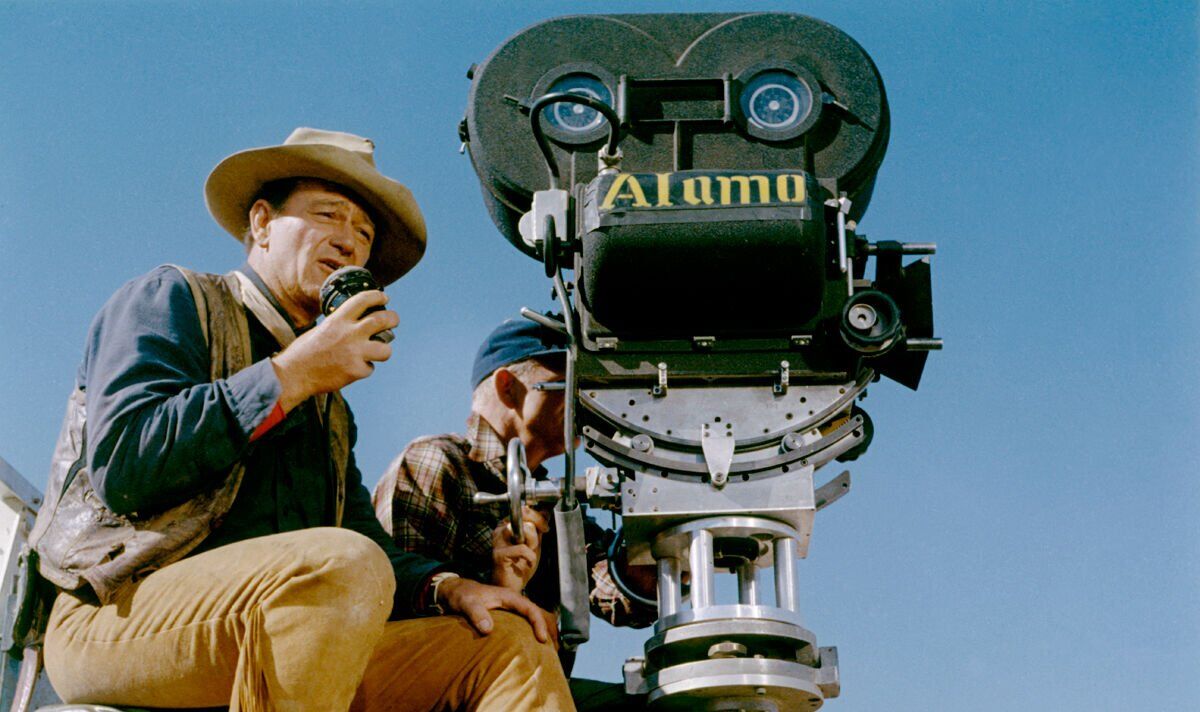 In 1960, legendary actor John Wayne decided to tell the story of a historic event for the big screen. He chose to tell the story of the Battle of the Alamo, the actual battle that took place in Mexico and was a pivotal event in the Texas Revolution. And he went to great lengths to get The Alamo made. He and producer Robert Fellows formed Batjac, their own production company to bring the film to life.

Wayne acted as both producer and director of The Alamo, but also declined to star in the film. However, his first hurdle came when he began to struggle to secure financial backing for the film.

Adamant that his vision for The Alamo would not suffer, Wayne approached United Artists for financial support for the picture. The company agreed to contribute $2.5 million for its production as well as serve as a distributor – but there was a catch.

United Artists would only give Batjac the money if Wayne also agreed to star in the film, noting that it would be a much more financially sound investment with his face attached to the image. Wayne agreed and took on the role of Colonel Davy Crockett.

But Wayne still didn’t have enough money to make the movie he wanted. So he had to start dipping into his own pockets.

Years after The Alamo was released, Wayne revealed that he invested over $1.5 million of his own money in the film.

$1.5 million is a lot of money today, but in 1960 it was an extraordinary amount of money (equivalent to about $9 million). But Wayne believed so passionately that the Alamo was a good investment that he would spare no expense.

Eventually, he began to despair.

Before long, he had no choice but to take out second mortgages on his homes to further fund the film. The American star also agreed to use his vehicles as collateral to acquire loans for the film.

In the end, The Alamo had a budget of $12 million, much of which was funded by Wayne himself.

But the star’s problems didn’t end there.

Frankie Avalon was “intimidated” by the many rattlesnakes on set for the film, which was shot in the deserts of Texas.

And one of the actors even broke a bone in front of the camera during filming.

Laurence Harvey, who played Colonel Travis, fired a cannon shot but forgot about the gun’s recoil. The barrel rolled over Harvey’s foot, shattering him completely. But the actor did not shout or make any sudden movements.

It wasn’t until Wayne called “cut” that Harvey fell to the ground and began to writhe in pain. After this heartbreaking event, Wayne praised the professionalism of the star.

Fortunately, after all these financial and logistical difficulties, Wayne’s film was a huge success.

The Alamo earned $20 million at the box office and even earned an impressive Best Picture nomination at the 1961 Oscars.

LOS ANGELES, CA / ACCESSWIRE / June 24, 2020, / Compare-autoinsurance.Org has launched a new blog post that presents the main benefits of comparing multiple car insurance quotes. For more info and free online quotes, please visit https://compare-autoinsurance.Org/the-advantages-of-comparing-prices-with-car-insurance-quotes-online/ The modern society has numerous technological advantages. One important advantage is the speed at which information is sent and received. With the help of the internet, the shopping habits of many persons have drastically changed. The car insurance industry hasn't remained untouched by these changes. On the internet, drivers can compare insurance prices and find out which sellers have the best offers. View photos The advantages of comparing online car insurance quotes are the following: Online quotes can be obtained from anywhere and at any time. Unlike physical insurance agencies, websites don't have a specific schedule and they are available at any time. Drivers that have busy working schedules, can compare quotes from anywhere and at any time, even at midnight. Multiple choices. Almost all insurance providers, no matter if they are well-known brands or just local insurers, have an online presence. Online quotes will allow policyholders the chance to discover multiple insurance companies and check their prices. Drivers are no longer required to get quotes from just a few known insurance companies. Also, local and regional insurers can provide lower insurance rates for the same services. Accurate insurance estimates. Online quotes can only be accurate if the customers provide accurate and real info about their car models and driving history. Lying about past driving incidents can make the price estimates to be lower, but when dealing with an insurance company lying to them is useless. Usually, insurance companies will do research about a potential customer before granting him coverage. Online quotes can be sorted easily. Although drivers are recommended to not choose a policy just based on its price, drivers can easily sort quotes by insurance price. Using brokerage websites will allow drivers to get quotes from multiple insurers, thus making the comparison faster and easier. For additional info, money-saving tips, and free car insurance quotes, visit https://compare-autoinsurance.Org/ Compare-autoinsurance.Org is an online provider of life, home, health, and auto insurance quotes. This website is unique because it does not simply stick to one kind of insurance provider, but brings the clients the best deals from many different online insurance carriers. In this way, clients have access to offers from multiple carriers all in one place: this website. On this site, customers have access to quotes for insurance plans from various agencies, such as local or nationwide agencies, brand names insurance companies, etc. "Online quotes can easily help drivers obtain better car insurance deals. All they have to do is to complete an online form with accurate and real info, then compare prices", said Russell Rabichev, Marketing Director of Internet Marketing Company. CONTACT: Company Name: Internet Marketing CompanyPerson for contact Name: Gurgu CPhone Number: (818) 359-3898Email: [email protected]ketingcompany.BizWebsite: https://compare-autoinsurance.Org/ SOURCE: Compare-autoinsurance.Org View source version on accesswire.Com:https://www.Accesswire.Com/595055/What-Are-The-Main-Benefits-Of-Comparing-Car-Insurance-Quotes-Online View photos