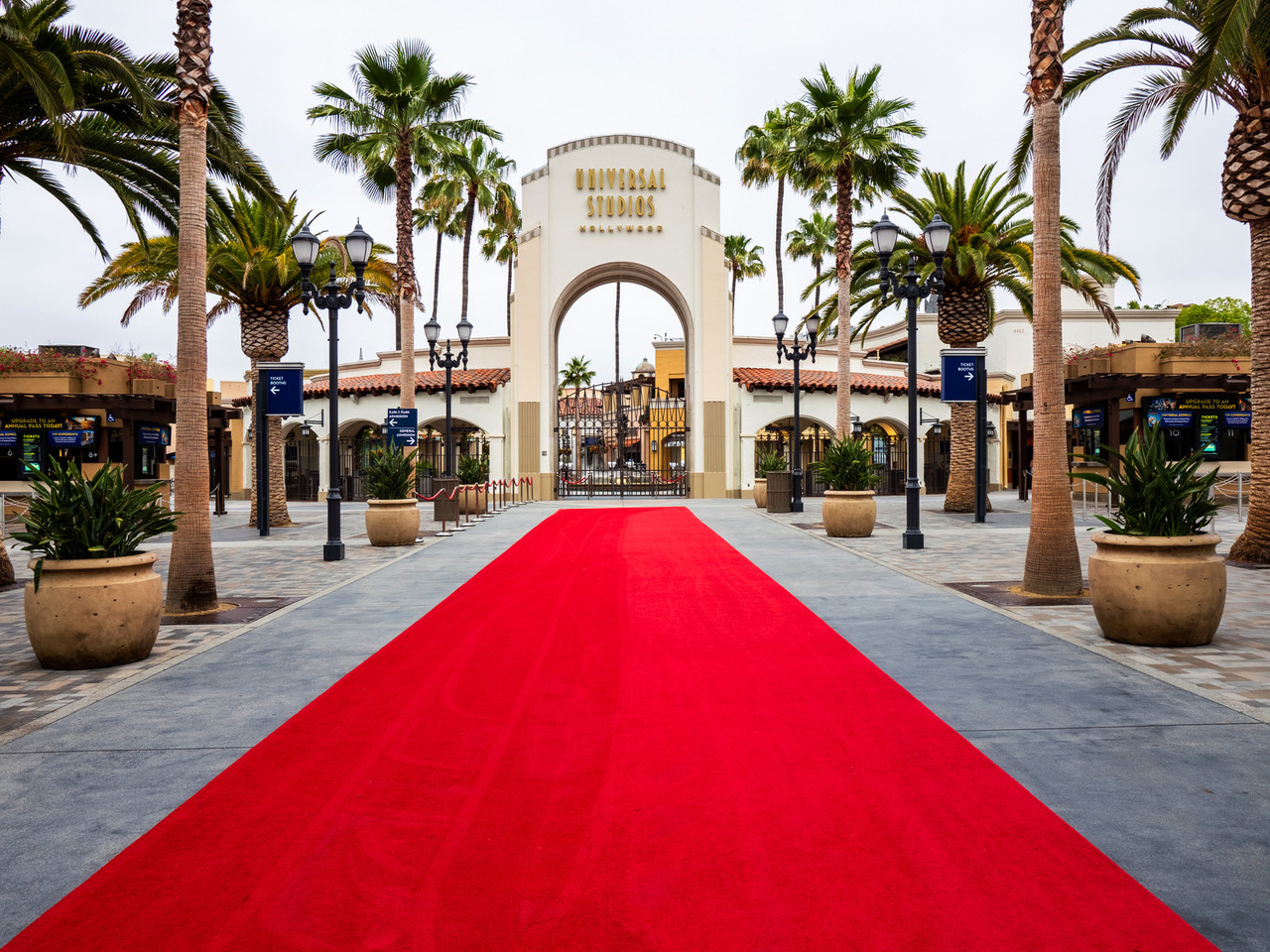 I’m having lunch on a quiet patio, overlooking Burbank on a sunny afternoon, when a familiar redhead walks up to my table.

My full name is Lucille Esmeralda McGillicuddy Ricardo, she said. Isn’t that a bite?

Not as big a bite as when you worked in that chocolate factory, my date responds. She’s a lot more of an I Love Lucy fan than I am.

I get up from the table, my phone in my hand. Ohh, I see a camera, said Lucy. Are we going to take one of those you call handymen?

You might be surprised that a fictional character is talking to us, but not me. A few minutes earlier, Doc Brown from Back to the Future was chatting with nearby diners. (Tragically, he didn’t stop by my table so I could use the even more tragic answer that I had prepared 1.21 gigawatts of food! if he asked me what I ate for lunch.)

That day, when I was at Universal Studios Hollywood, I saw a lot of stars: Marilyn Monroe, sitting in her chair between takes; Beetlejuice, doing his ghost with the most stuff; Hello Kitty waving and blowing kisses to passers-by; and friends from Scooby Doos Mystery Inc. hanging out by their psychedelic van.

I tried to spot Dracula, as he sometimes frequents the European section of the Upper Lot, but hey, I should have been wary: it was the middle of the day.

I’ve been to Universal Hollywood many times, but this day was different. That day was my first VIP tour, but after doing the math, it won’t be my last.

Weekends at Universal are just as busy as at Disneyland, and wait times can easily exceed an hour for the most popular rides, like Jurassic World and Harry Potter and the Forbidden Trip. The park’s newest ride, The Secret Life of Pets: Off the Leash, is so popular that busy days require a virtual queue that fills up quickly.

During the week, however, it’s a different story. I couldn’t ride The Secret Life of Pets on a Friday a few weeks ago because the queue was full for the day, but I walked Wednesday afternoon with no wait at all. A VIP tour which is a small group led by a Universal guide will get you to the start of the express line at any ride or show in the park, but that’s not why I wanted to go.
I wanted the one experience you can’t have as a regular park guest.

Universal is a small park, much smaller than Disneyland, and most of the rides have virtual reality components that make it hard to do more than two or three rides a day without my brain getting a little too spiny.

What keeps me coming back and what made me invest in an annual pass, which costs about the equivalent of two day tickets, is the Studio Tour. Universal Studios theme park is located in Universal City, a working movie studio so big it has its own zip code, and there are always productions happening there. The Studio Tour tram ride takes one hour and passes through the front lot of sound stages and the back lot of hands-on sets.

Depending on what’s being filmed that day, you might spot celebrities (recently, Chris Pratt and Bryce Dallas Howard stopped to say hello to a tram full of guests as they left a soundstage doing the press for Jurassic World Dominion) or you might see a real production in progress (this week I saw the new season of Mindy Kalings Never Have I Ever filming).

I really can’t overstate how much I love this tour. Of course, the attraction pieces are always the same. There’s a King Kong 3D movie part and a Fast & Furious chase scene, plus a simulated earthquake at a San Francisco BART station, and they’re cute but not always so thrilling at the 100th turn.

What I like is that the other parts of the tour are different every time. Sometimes you can drive through the Old West town, but sometimes you don’t (because, say, Quentin Tarantino is shooting Once Upon a Time in… Hollywood there, and you’re about 50 feet from Brad Pitt, but you don’t know). Sometimes you can drive around the suburban cul-de-sac that used to be the street from The Burbs and Wisteria Lane from Desperate Housewives, although my favorite little trivia of this area is that The Munsters’ home, 1313 Mockingbird Lane, was there formerly. You’ll pass the Bates Motel from Psycho, walk through the wreckage of a plane used in Steven Spielberg’s War of the Worlds, and narrowly escape Jaws attacking your tram at Amity Island.

The main draw of a VIP tour, at least for me, is the extended studio tour that is much more expansive. During a VIP tour, you take a smaller, fancier cart, and you can stop in and out to explore areas of the backlot that aren’t usually open to guests. That day I found myself in Hill Valley from Back to the Future, at the exact spot where Biff picks up a car full of manure, the same area that also serves as the town square in Ed’s new show Helms, Rutherford Falls. Around the corner is the New York lot, which was the Victorian London of Bram Stokers Dracula and destroyed by evil car robots in Transformers. (The rule, our guide explained, is that you can do whatever you want while filming as long as you fix it, so director Michael Bay literally blew up the street and then rebuilt it.)

In this cul-de-sac we have to get out and walk around, even enter one of the houses. Not all of them have what’s called a practical set inside that you can film in, but the one we saw was fully equipped like any other suburban home.

It might not sound exciting to you, but growing up in a small town in New England, I felt so far removed from Hollywood that movies might as well have been made on the moon. Part of me is really excited to see where these movies are shot.

After the studio tour, we headed to Hogsmeade to explore the wizarding world of Harry Potter. When you buy an express pass, you have access to a fast lane for the queues, but our passes gave us first line access to this express lane, on foot by the tour guide. Then it was lunch, a generous buffet with cheese and cold cuts, fresh fruit and vegetables, pasta, a carving station, a pancake station and all the desserts in the country.

As I sat there eating ginger-soya salmon and chocolate-covered strawberries, I thought about how, although signing up for a VIP tour sounds like splurge, it really isn’t. much more than an ordinary day at the park.

VIP tickets are $300 each (plus on peak days) and include frontline access, breakfast, lunch, bottled water throughout the day, and valet parking. On the same day, you can purchase a park ticket for $100 to $150 depending on the day, an express pass for around an additional $100, and regular parking for $30 or valet parking for $50. It’s almost the same cost as a VIP ticket, and that’s before you buy anything to eat or drink. Plus, you can ask your guide for park info or movie trivia throughout the day. Believe me: I asked mine a lot and he did a really good job of pretending not to be annoyed by it.

After lunch there was the WaterWorld show, which is always entertaining even though this movie has seen better days, then Minions, Pets and a trip down a terrifying dinosaur-filled river in Jurassic World.

Maybe the rest of the group did more, you can basically fit every ride and show in the park on a VIP tour day, but I wouldn’t know. I returned to Upper Lot to find Dracula.