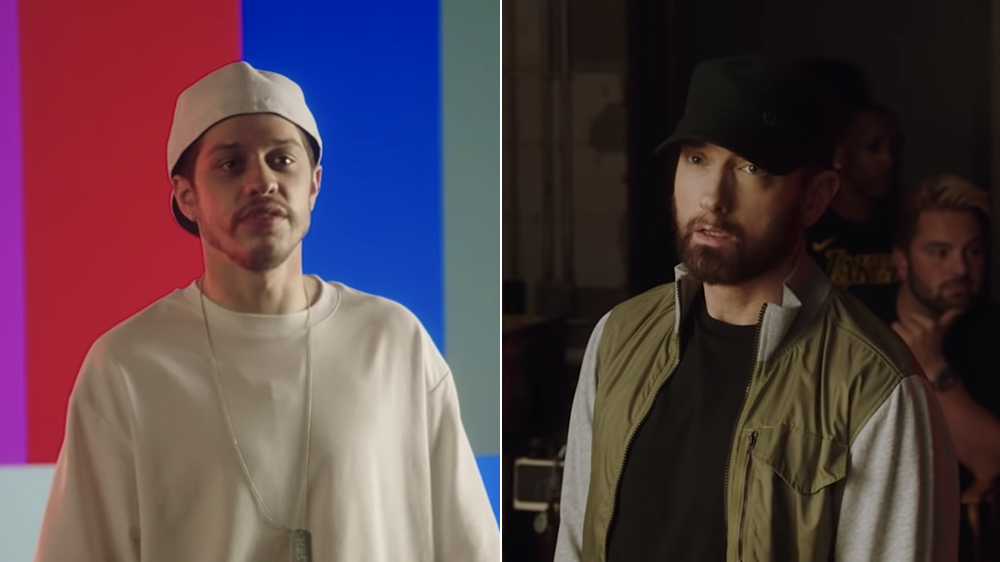 After eight seasons of “Saturday Night Live,” Pete Davidson received his memorial farewell from Eminem, who made a surprise appearance in a parody of his 1999 hit with Dr. Dre “Forgot About Dre.”

For the season 47 finale of “Saturday Night Live” on May 21, Eminem made an appearance as part of a cut-for-time musical sketch in tribute to “SNL” producer Lorne Michaels.

In the skit, Davidson raps about the legendary producer’s accomplishments, crediting him with promoting the careers of such prominent comedians as John Belushi, David Spade, Tina Fey and Will Ferrell.

The skit begins with host Natasha Lyonne approaching Davidson to tell her that Michaels is upset because now that Davidson is leaving, he won’t be able to fulfill his long-held wish to star alongside the young comedian in one of his music video parodies.

“This guy literally did everything for me, so I’m going to reward him by making this rap video exactly the way he wrote it,” Davidson told Lyonne, holding Lorne’s trashed script.

With the famous 1999 beat guiding his rapping flow – Davidson shows up dressed as Michaels, surrounded by awards and lines about the coveted producer whose face appears like deep fakes strewn throughout the video. He boasts of his impeccable Rolodex, the names of Joe Biden, Paul McCartney and Paul Simon.

“So how about a great comedy? I’ve been doing it myself for half a century straight,” Davidson raps, mimicking Eminem’s hard-hitting delivery.

As Davidson gets comfortable with his Eminem impersonation, the illustrious rapper himself appears and shouts at the “King of Staten Island” star off camera. In his classic poker face, Eminem looks at Davidson in question.

“Is this another parody, is it like another homage or something?” he asks, to which Davidson replies “Yeah, that’s like the third one.”

“Yeah, they all suck. Please stop,” he told Davidson. With a confused face, the 28-year-old comedian tries to explain, “Honestly, we’re doing this because we love you so much, it’s like a tribute.”

“Pete, fuck, don’t do it again,” Eminem reacts, pointing his finger at Davidson who is staring at a character playing Michaels and shouting, “You ruined everything!”

The ‘SNL’ star has previously starred in other Eminem parodies on the show – most recently Davidson turned Eminem’s ‘Stan’ into a Santa-inspired ‘Stu’, a skit that also featured Eminem in a cameo role.

Watch the “Forgot About Lorne” skit in the video below: