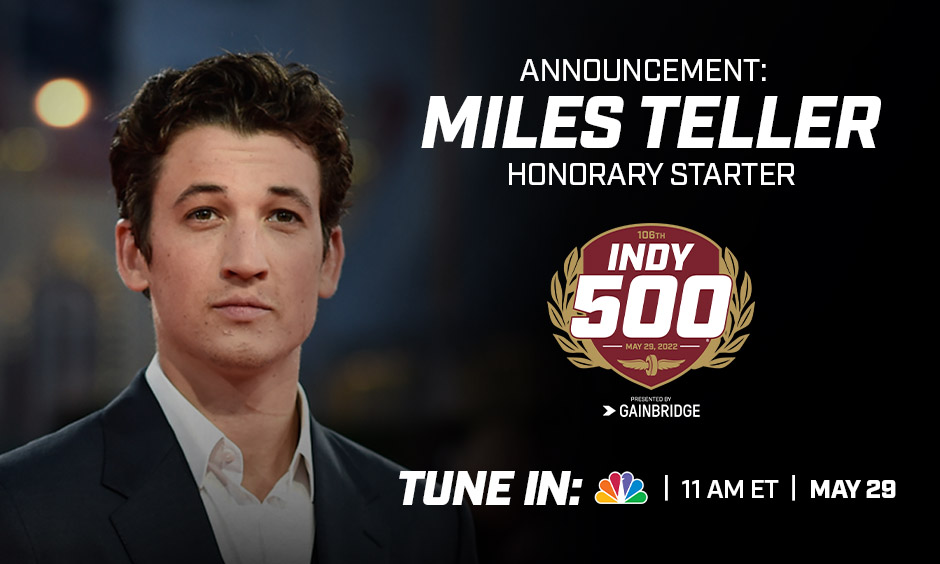 Miles Teller, star of blockbuster action movies and character-driven indie films, will serve as the honorary starter for the 106th race of the Indianapolis 500 presented by Gainbridge, waving the green flag on Sunday, May 29 at Indianapolis Motor Speedway.

Teller stars as Bradley “Rooster” Bradshaw, son of the beloved “Goose,” in Paramount’s “Top Gun: Maverick” starring Tom Cruise, the sequel to “Top Gun.” The film will be released nationwide on May 27. He can also be seen in the filming of “The Godfather” series, “The Offer”, for Paramount +.

“Miles is no stranger to action-packed roles, and waving the green flag for the 33 drivers racing for history will give him a similar adrenaline-fueled experience,” said IMS President J. Douglas. Boles. “We are happy to welcome him to ‘The Greatest Spectacle in Racing’ for a day he will never forget.”

This summer, Teller will also appear in the sci-fi thriller “Spiderhead,” an adaptation of a short story by George Saunders first published in the new yorker and was later included in the author’s book “Tenth of December”.

In 2014, Teller starred alongside JK Simmons in the critically acclaimed and Oscar-nominated Sony Pictures Classics drama, “Whiplash.The hit film received the Grand Jury Prize and People’s Choice Award at Sundance and the Deauville Film Festival, and earned Teller a Best Actor nomination at the 2014 Gotham Awards.

Teller began to achieve critical success after starring in James Ponsoldt’s film, “The Spectacular Now”, for which he won the Dramatic Special Jury Award for Acting at the 2013 Sundance Film Festival. He made his film debut in 2010 in “Rabbit Hole”, after being cast in the role by co-star Nicole Kidman.

Live coverage of the Indianapolis 500 presented by Gainbridge begins at 11 a.m. ET Sunday, May 29 on NBC, Telemundo Deportes on Universo and the INDYCAR radio network.

To visit ims.com to purchase tickets for the 106th Indianapolis 500 presented by Gainbridge and for more information on the full May schedule on IMS.