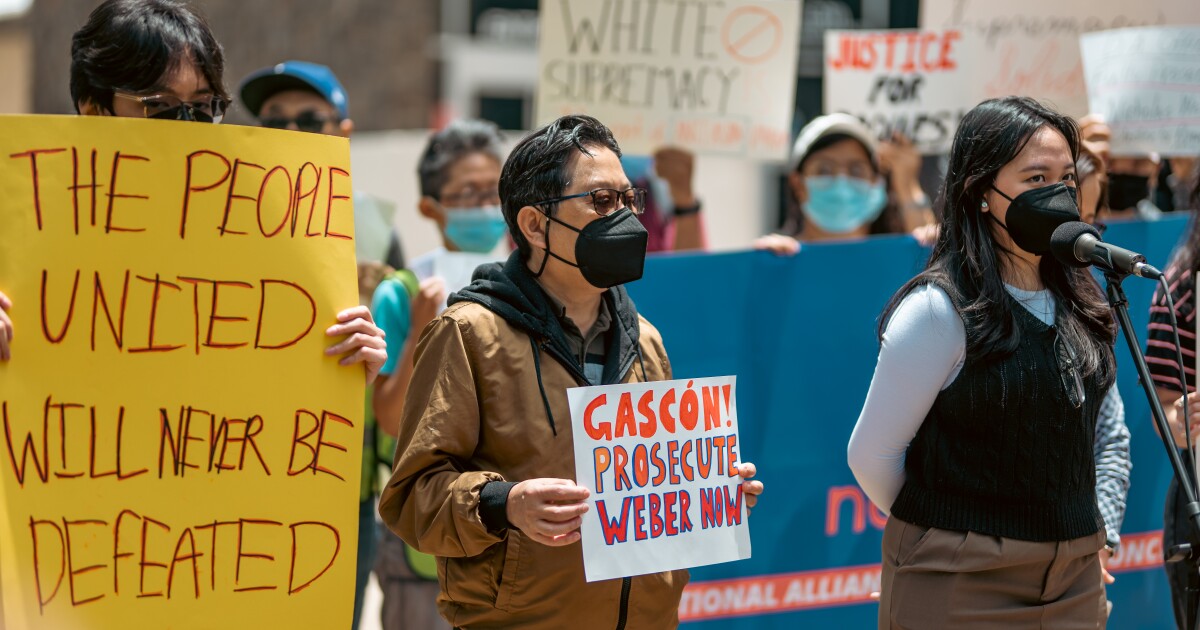 When a man in a Jeep ran over Nerissa and Patricia Roque at a McDonalds drive-thru on Victory Boulevard in North Hollywood, mother and daughter at first thought it was a hit-and-run.

The man left the queue and Patricia, 19, pulled out her phone to capture the make, model and license plate of the SUV on video.

Then he started screaming.

Oh. You’re so Asian, he shouted, in a tone that seemed to affect some sort of Asian accent. Yeah, you’re so Asian.

After the man revved his engine and drove off, Nerissa, 47, and her daughter thought he was gone. But then he came back, shouting more insults and, eventually, threats.

Kill you. Oh yeah I want to kill you, the man said.

The May 13 encounter quickly turned violent, captured by Patricia in a series of videos that were provided to The Times on Friday.

Now the Filipino family are speaking out after Nicholas Weber, who was released with a court date and charged with hate crimes in the attack, failed to show up for arraignment. An arrest warrant is issued against him.

In one of the videos provided to The Times, the man tries to get into the family car as Patricia, sitting in the passenger seat of the car, closes and locks the door moments before pulling the handle.

By then the mother and daughter had called the police and Nerissa’s husband, Gabriel Roque, 62, had arrived from the family home.

A video full of swearing shows the man pushing Gabriel, who falls into a concrete parking lot, and lands on top of him.

Sandy Roxas, the Roque family attorney, said Gabriel was taken to hospital with broken ribs and a bruised left arm.

After a passerby and Nerissa separate the man from Gabriel, another video captures a second assault. In a scene partly captured on video and described by Patricia and Nerissa, the man, with his back against a wall, grabs Nerissa by the throat.

He is heard screaming as Patricia runs, panning the camera towards the confrontation and yelling at the man to stop.

Shut up, the man yells before separating from Nerissa.

Police arrived about an hour after the initial confrontation, Nerissa and Patricia told The Times. The man was taken to the hospital, Roxas said, adding that authorities issued him a citation and a court date before releasing him.

Weber did not show up for arraignment on June 8, Roxas said. A judge has issued an arrest warrant for him and he is still at large.

On Friday, the Roque family held a rally at the Van Nuys branch of the Los Angeles County District Attorney’s Office with about 60 supporters.

Nerissa and Patricia said they hope to raise awareness about anti-Asian hate crimes and see Weber brought to justice.

It really meant a lot to me and my family, Patricia said of Friday’s participation. We were already scared and frightened by what happened to us, so having a community by our side gives us a sense of empowerment and hope that we get the justice we deserve, not only for ourselves but for others as well. victims.

Nerissa said she and her family did not feel safe, adding: We know he is still here right now.

The help the family received from passers-by that night gives them a glimmer of hope, Patricia said. People who commit racist attacks cause so much harm and trauma, she added. We hope to lead by example.

Such incidents, said Patricia, are emblematic of a recent increase in anti-Asian hate crimes, which have increased during the COVID-19 pandemic.

Patricia recalls two years ago, during her senior year of high school, her classmates saying they no longer wanted to visit Asian restaurants or hang out with Asian American friends, leaving her and others feel like they don’t belong.

It’s become so normal for communities like the Asian community and other communities of color to feel like that’s what we should expect from others, Patricia said.

Coming publicly about a hate crime is never easy, said Katie Joaquin, board chair of the Philippino Migrant Center, which works with the Roque family.

They had the courage to do it, Joaquin said.

We have just mobilized all the support we can to ensure their case gets the visibility it deserves, she added, and is fully investigated and prosecuted by the bureau. district attorneys.

She echoed the Roque family’s call for solidarity and urged others in their place to seek support following racist attacks and interactions.

Many victims and survivors of hate crimes are unwilling to come forward because they are afraid, Roxas said. And if they don’t come forward, they can’t get the help they need.

Sensorio celebrates the 4th of July with extended special hours