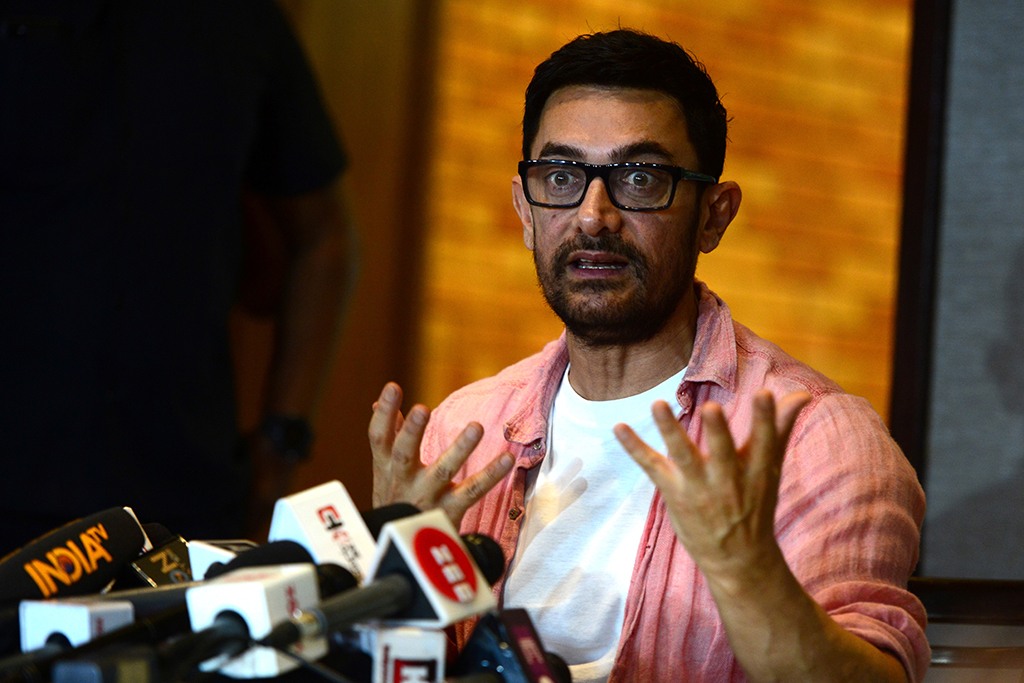 According for Forrest Gump, life is like a box of chocolates because “you never know what you’re going to get”. Now an Indian remake of the film has been hit with calls for a boycott following years-old comments from its Muslim star Aamir Khan.

It is the latest example of how Bollywood actors, especially minority Muslims like Khan, are feeling increased pressure under Hindu nationalist Prime Minister Modi. “Laal Singh Chaddha”, an Indian version of the 1994 Hollywood hit starring Tom Hanks, is set to be one of the biggest Indian films of 2022.

This is largely due to its main star, Khan, 57, one of the most bankable actors in the Indian industry with past blockbusters like ‘3 Idiots’ (2009) and ‘Dangal’ (2016). But ahead of the August 11 release, the internet is awash with clips from a 2015 interview when Khan expressed a growing “feeling of fear” and he and his then-wife discussed leaving India.

“She is afraid for her child. She is afraid of what will be the atmosphere around us. She is afraid to open the newspapers every day,” he said. More than 200,000 tweets, including many from supporters of Modi’s BJP party, have been shared since last month calling on people to reject the film with the hashtag #BoycottLaalSinghChaddha.

Such is the furor over his new film – which adapts Hanks’ famous line that ‘life is like a golgappa’, an Indian snack – that Khan this week underlined his patriotism, a key principle of the Modi government . “I am sad that some people…believe that I am someone who does not like India,” he told local media. “It’s not. Please don’t boycott my movie. Please watch my movie.

The films have long sparked controversy – as well as violence – in this movie-mad country of 1.4 billion people. But the warmth felt by Khan, one of the industry’s Muslim megastars along with Shah Rukh Khan and Salman Khan, reflects growing intolerance, marginalization and defamation of the minority, commentators say.

“There is no doubt that Aamir is the target of those who spread hatred towards Muslims,” ​​a commentator, who wished to remain anonymous for fear of becoming a target himself, told AFP.

Modi’s Bharatiya Janata Party (BJP) owes its origins to Rashtriya Swayamsevak Sangh (RSS), a militarist group espousing ‘Hindutva’, or making India an exclusively Hindu state. Lynchings of Muslims by Hindu mobs for the so-called protection of cows – a sacred animal for many Hindus – and other hate crimes have struck fear among the 200 million Muslims.

Social media is full of false information claiming that Muslims will soon outnumber Hindus – due to inter-religious marriages – or that the minority are a treacherous fifth column backed by Pakistan.

Critics say the world’s most prolific film industry and its stars have gradually changed their output to fit the government’s narrative since Modi came to power in 2014. In 2019, hagiographic ‘PM Narendra Modi’ was too much even for the Electoral Commission, which delayed its release until after a vote that year.

There has been a recent spate of military-themed films that have been nationalistic, flamboyant tales of heroism by soldiers and police – usually Hindus – against enemies outside and inside the India. This year’s “The Kashmir Files”, about the flight of Hindus from Muslim-majority Kashmir in 1989-90, saw incidents of people in cinemas calling for revenge killings against Muslims.

Film critic and author Anna MM Vetticad said that the methods for “subordinating India’s Muslims and Christians to the majority community…include the demonization of these minorities and the constant demand for proof of their patriotism.” But little should change. “The tragedy of India is that a majority in Bollywood…is apathetic, opportunistic or scared,” Vetticad said. -AFP