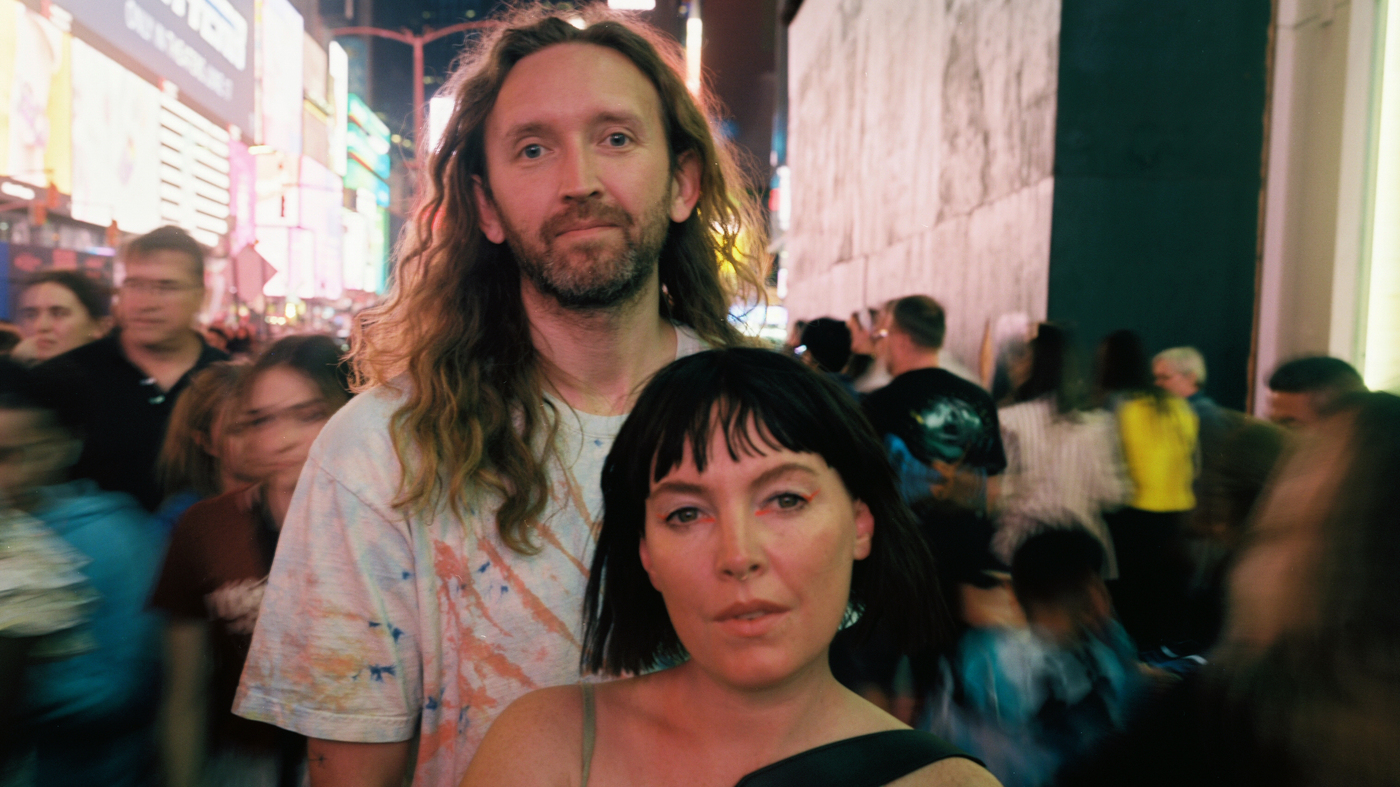 Songs from Sylvan Esso’s new album, No rules Sandy, do not seem laborious; instead, they hold a weightlessness underscored by a thematic interest in the present.

Songs from Sylvan Esso’s new album, No rules Sandy, do not seem laborious; instead, they hold a weightlessness underscored by a thematic interest in the present.

Sylvan Esso’s fourth album ends almost antithetically to the duo’s original musical impulses, setting the band’s then and now versions on opposite shores. As they recounted, it all started when folk singer Amelia Meath, then best known as a member of the avant-garde choral group Mountain Man, enlisted electronic music producer Nick Sanborn to remix her song, “play it well.” Sanborn, performing under the pseudonym Made of Oak, transformed a tightly harmonized a cappella tune into a brash, alien thing, heavy bottom and propellant. A band was born from the heady feeling of discovering something new in each other, with this remix as the penultimate track from their self-titled 2014 debut.

Ever since then, Sylvan Esso has been synonymous with an adventurous, rhythm-driven kind of pop. In this context, the closer album “Coming Back to You” is singular: in the more than 40 songs of the duo’s career so far, it is the first that Meath has written on an acoustic guitar, and the first to let her sound so prominent and unvarnished.

That last song may be a sonic outlier in the Sylvan Esso catalog, but a degree of experimentation is actually what it shares with the rest of No rules Sandy; as its title suggests, the new album isn’t marked by a reversal of the duo’s songwriting formula, but rather the abandonment of a formula. The result is an album that feels oblivious, a truer blend of Meath and Sanborn’s skills. With Sylvan Esso’s newfound disinterest in the characteristic bass of earlier hits”Hi Mom” and “Die young“, Sandy songs like “Your reality” and “I did not care” hold a weightlessness accentuated by a thematic interest in the present.

The duo traditionally write and record over a period of several months at their home in Durham, North Carolina, where the band even built their own studio, Betty’s, near Chapel Hill. No rules Sandy went a little differently. In early 2022, the band decamped to Los Angeles with no definite intention of recording an album. But Meath says that momentum built as she and Sanborn continued to enjoy the byproduct of the writing sessions.

“Even if we weren’t feeling well, we just sat down and tried to do something,” she said in a press release about the album. “Almost every day we did that, we had a song that we liked.”

Previous songs were often individually crafted. Meath would send Sanborn an a cappella voice memo for him to produce, with Sanborn creating an arrangement for her to write over. But here they’ve produced songs in tandem, and the resulting work is more relaxed, observational and rambling, with no flashy choruses or overpowering production. These songs do not seem labored, indicating an ease of song between two longtime partners. (This partnership also extends beyond music; the two quietly married in the years between their first two records.)

This collaborative process lends No rules Sandy a sense of immediacy, both in production and in lyrics. Opening song “Moving” thrusts us into the middle of a standard four-bar musical phrase as Meath, rattled by glitchy, frantic synth lines, tries to hold on in an ever-changing world. The repeated mantra “How can I be moved / When everything moves” is an articulation of a loss of feeling in a time when “everything happens so much”, but it is just as much an argument for the conservation of the immobility.

The repetition that categorizes “Moving” is a touchstone on a music album for the present. Time is not of the essence No rules Sandy; it is duly considered. Meath sings “look at me” 21 times on the eponymous song marked by heavy Nintendo 64-inspired synths, the sound of a tape rewinding to its start, and a chorus rhythmic with the ticking of needles of one. clock. On “Cloud Walker,” she implores the listener to “hold that breath/feel the sunshine,” an ingrained practice for slowing down time. Of course, by the next song, “Sunburn“, she’s felt it for far too long, but in Sylvan Esso’s world, itchy, blistered, pink, swollen skin is not an annoyance, but a reminder of a life well lived, of inhabiting a body that reacts to external forces.

“My favorite way to ruin myself,” Meath divulges, is “to eat the candy just when I see it.” And why shouldn’t she? Sylvan Esso is adept at evoking childlike feelings, whether it’s your first time falling in love with a song (“The light“) or jump one on the sidewalk because the music makes you feel alive (“Dance on the roof“) often through Sanborn’s whimsical synth lines or Meath’s nursery rhyme vocals.

Children don’t think too much about the future or the past. Do it nowwe could benefit from spending an afternoon in their place. Do it anyway, if you add the wisdom of adult experience. With that in mind, when Meath calls out saxophonist Sam Gendel with a quick “OK!” on the heart-pounding “How Did You Know,” it’s easy to mishear it as a “f***it!” In place. There’s freedom in that feeling, not the “give up because it’s not as good as you wanted” kind of thing, but the daily courage it takes to try something that might knock you over your stomach. . “Adapt!” asks how much more you could accomplish if you weren’t afraid of falling; Sylvan Esso and No rules Sandy rests on this courage. Meath said it herselfin her own way, on a podcast the band did around their latest album: “Sometimes I think of the nature of our collaboration as trapeze artists,” she says, “throwing themselves up in the air and all catching up time.”

But if the past songs were tokens of love passed between collaborators, there is reciprocity on No rules Sandy both in its creation and in its concept, where seeing another person and being seen back is the highest state of intimacy. If our narrator begins the album with the quiet request of “look at me”, she ends it with an effort in return on “Coming Back to You”. “I don’t want to cross the ocean / I don’t want to cross the sea” becomes “I’m on the ocean / I’m at sea”, lines crossed by love. And what begins as an acoustic ballad has also transformed, on the second chorus: Sanborn filters Meath’s vocals through a vocoder, overturning the idea that acoustic songs or unprocessed vocals are the most authentic purveyors of emotion. or signifiers of vulnerability. For Sylvan Esso, electronics are the bedrock of confidence, dating all the way back to the “Play It Right” remix.

This sense of cooperation empowers them across a range of projects. The two artists have continued to expand their corral of collaborators Mountain Man is still active; Sanborn found work as a producer for artists like Jenn Wasner of Flock of Dimes; both have recently launched new projects (The A’s for Meath and GRRL x Made of Oak for Sanborn) and together they have demonstrated their commitment to building community in Durham with Betty’s, their own label and big shows like the Three Days , billed locally Historical performance of Durham Athletic Park.

Of all their collaborations, it’s perhaps too romantic to say that Sylvan Esso is the most essential, but it’s especially exciting to see how Meath and Sanborn see each other in every song. You don’t have to know yourself to know another, but there’s chemistry and an open door if you do, and No rules Sandy alludes to the reward of going through it together. There’s something captivating about watching two people perform a confidence fall over and over and over again; listening to their music is like closing your eyes and tipping back.

The rehearsal: what to watch next if you like Nathan Fielders’ jaw-dropping show

Steve Martin Could Retire After Only Murders in the Building: That’s Oddly