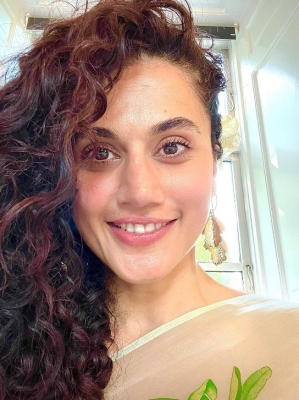 Taapsee tells what the rays of Ashok Chakra represent

Mumbai– Bollywood actress Taapsee Pannuwho is currently awaiting the release of her upcoming movie ‘Dobaaraa’, took to her social media to share a powerful message on the occasion of India’s 75th Independence Day.

She posted a photo of the Indian flag in the story section of her Instagram. The image shows each ray of the Ashok Chakra signifying a good quality or value that the citizens of the nation should uphold.

The ‘Manmarziyaan’ actress also posted a thoughtful message in the photo. She wrote, “Darkness cannot drive out darkness, only light can do that. Hate cannot drive out hate, only love can do that. Aur pyaar kaise kiya jata hai? Pyaar kar ke (how does one love? Simply by loving). Happy 75 years to our India, may we continue to make her proud by being honest with this love.

On the work side, Taapsee finds Anurag Kashyap, his director of ‘Manmarziyaan’, with ‘Dobaaraa’. The film, which opened the recent edition of the Melbourne Indian Film Festival, is set to arrive in theaters on August 19, 2022.

Mumbai– Known for making films with a touch of patriotism such as ‘Baby’, ‘Holiday: A Soldier Is Never Off Duty’, ‘Airlift’ and ‘Kesari’ to name a few, the Bollywood superstar Akshay Kumar India’s Independence Day asked everyone to “always cherish this freedom”.

Akshay took to social media, where he shared a photo of himself posing with the flag.

“Let us always cherish this freedom. Happy Independence Day. #Indiaat75,” he wrote in the caption.

On the acting front, Akshay, whose latest release is “Raksha Bandhan,” has a slew of movies waiting to be released. It has ‘Ram Setu’, ‘OMG-2’ and ‘Mission Cindrella’.

Akshay also has ‘Gorkha’, a film based on the life of Major General Ian Cardozo, who lost his leg in a landmine explosion but overcame his disability to become the first war-disabled officer in the Indian Army to command a battalion and a brigade.

Mumbai– India celebrates 75 years of its liberation from British colonial rule. As the nation soaks up the big celebrations, B-town is not far behind in expressing their love for the nation and marking the special day on their social media.

As Bollywood superstar Shah Rukh Khan hoisted the Indian tricolor at his residence, Mannat, on Sunday night as part of the ‘Har Ghar Tiranga’ initiative. Monday, world star Priyanka Chopra Jonas shared a video in the story section of his Instagram.

Anushka and Virat wish all Indians around the world: Happy Independence Day

Mumbai– star couple Anouchka Sharma and Virat Kohli shared a photo on social media and wished all Indians around the world a very Happy Independence Day on Monday.

Anushka shared a photo on Instagram, posing with her cricketer husband Virat Kohli and the Indian flag.

“Let’s celebrate 75 years of our independence by wishing all Indians around the world a very #HappyIndependenceDay! Jai Hind,” she captioned.

On the work front, Anushka will be seen in ‘Chakda ‘Xpress’ which is a biopic about fast bowling cricketer Jhulan Goswami. She will train intensively for the game in Leeds in the UK, to prepare before shooting the intensive cricket parts of the film.

‘Chakda’ Xpress’ marks Anushka’s return to filmmaking as an actress following her 2018 release ‘Zero’ in which she starred alongside superstars Shah Rukh Khan and Katrina Kaif.

The Netflix movie charts the glorious journey of one of the fastest point guards in the history of world cricket, Jhulan, will show how the point guard rises through the ranks despite countless obstacles to fulfill her one dream: to play cricket.

Ayushmann spends the day with BSF jawans in Jammu

Ayushmann took to Instagram where he shared a reel showing everything he did during the day with the soldiers.

The clips show Ayushmann training, jogging and playing cricket with the jawans. He then proceeded to Border Security Force Border HQ, Jammu, where he was seen dancing and planting a tree.

The video ends with a message that read: “Happy Independence Day”.

On the work side, the actor will next be seen in Aanand L. Rai’s “An Action Hero” and “Doctor G”, where he is paired with Rakul Preet Singh.

Kareena posted a video on Instagram, where Saif is seen helping Taimur put together a rock band stage using a cardboard box and legos.

“This #IndependenceDay we tried to build…and we built. Tim’s very first rock band stage, made out of recycled paper. Reuse, recycle, be free… #FamilyTime #Reels #ReelItFeelIt,” Kareena wrote next to the video.

On the acting front, Kareena’s latest release is “Laal Singh Chaddha” featuring Aamir Khan, Naga Chaitanya and Mona Singh. This is a remake of the Hollywood movie “Forrest Gump”.

Saif will be seen alongside Hrithik Roshan in the neo noir action thriller ‘Vikram Vedha’ which also stars Radhika Apte.

Mumbai– bollywood star Ranveer Singhwho recently won Best Actor of the Year for his role as Kapil Dev in director Kabir Khan’s ’83’ at the Indian Film Festival Melbourne (IIFM), is delighted with his win and dedicated the honor to all members of Kapil Dev’s World Cup winning team.

He further mentioned that he will forever cherish the process of making ’83’, “But more than the accolades, it is the process of making this film that I will treasure the most. I am grateful to Kabir Sir for for giving me this opportunity, for guiding me and inspiring me through his leadership. I share this honor with the cast and crew of 83 who are so dear to me and with whom I share a very, very warm.

Dedicating this honor to each member of India’s 1983 squad, he added, “I dedicate this honor to the Kapil’s Devils, a fine band of gentlemen who dared to dream, who by their efforts and achievements have shown us that we Indians can be the best in the world. world.” (IANS)