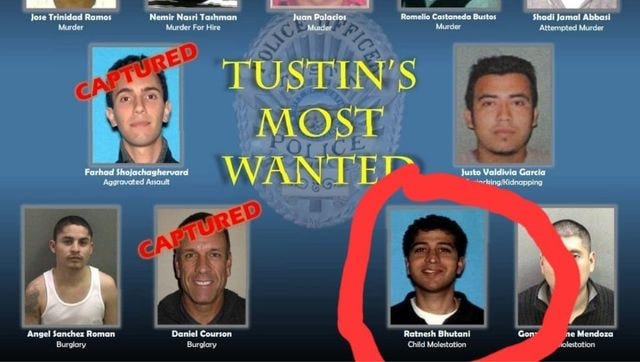 This image was released in 2006 after Ratnesh was added as one of the most wanted fugitives in Tustin, California.

According to US county police records, Ratnesh Bhutani had been wanted for child molestation since 2006. He was charged with sodomy, lewd act with a minor and penetration with a foreign object. He faces $500,000 bond in Tustin.

According to UPSTF, police received the request notification from Interpol in July 2022 after discovering that Bhutani was hiding somewhere in Uttar Pradesh.

During questioning, he told cops he first traveled to California in 1996 to work at the Moshtac Cancer Lab and stayed with his uncle.

He also got married there and got the green card. However, after the alleged incident of unnatural sex and illegal penetration, a complaint was filed against him and he later returned to Mumbai and got married for a second time, according to police reports.

Bhutani after returning to India entered Bollywood; he started a production company under the name of Shri Keshav Films, the police report added.

He also claimed to have produced a movie called Bolo Ram in which he launched his younger brother Rishi Bhutani as an actor in Bollywood, Inspector Ravindra Kumar said.

However, in 2014, the US-registered case was transferred to the CBI at the request of the FBI, prompting Bhutani to keep a low profile, Kumar said.

Police tracked him down following a tip that Bhutani was running two resorts on the DelhiMeerut highway.

Following the tip, we obtained an arrest warrant from the Patiala High Court and activated human and digital intelligence, Kumar said, adding that Bhutani was hiding in the house of one of his relatives in Agra from where he had been arrested.

Bhutani was taken into custody.