With Unlock 4.0 underway, Bollywood actors, filmmakers and film crews are gradually returning to the sets. The new standard during the pandemic includes smaller teams, strict security measures, social distancing and the addition of safety gear as well as PPE suits. While some B-Town stars have returned to their movie sets, others are shooting for advertising campaigns and dubbing their films. There are also some who are promoting their upcoming films.

Akshay Kumar, Huma Qureshi and Lara Dutta film in UK
The ‘Bellbottom’ crew, comprising Akshay Kumar, Huma Qureshi and Lara Dutta, were among those to take the lead, and now slowly but surely more are following suit. The team flew to the UK to shoot the film the first week of August. Akshay and Lara were also accompanied by their family on the work trip. After completing the mandatory quarantine period, the team rolled up their sleeves and got to work on August 20. She always posted pictures from there.

Deepika Padukone shoots in Goa, while Ranveer Singhs works in Mumbai
Deepika flew to Goa to begin filming on her film directed by Shakun Batra, with her co-actor Siddhant Chaturvedi. Meanwhile, her husband, Ranveer, was seen filming a brand campaign in a studio in Mumbai.

His destination Goa for Ishaan Khatter and Ananya Panday also
The main couple of “Khaali Peelis”, Ishaan and Ananya, are in Goa to promote their upcoming film. They were recently clicked at Mumbai airport with PPE suits and masks. Previously, the duo had been seen in a studio in the city.

A break for Arjun Kapoor
On September 1, Arjun Kapoor shared a photo from the set of his next movie with Rakul Preet on social media, saying: Glad to be back on set (sic). However, filming had to be halted when he tested positive for COVID-19 on September 6. Meanwhile, Rakul flew to Hyderabad to shoot a Telugu film. It is still not known if Arjun and Rakul will resume filming their movie anytime soon. Arjun had been in work mode since July, having filmed for an advertising campaign.

Taapsee Pannu is in Jaipur for his Tamil film
Recently, Taapsee shared a photo after a long hike in Jaipur. According to reports, she is in the Pink City for the filming of her Tamil movie with Vijay Sethupathi. In a recent interview, she said the start-to-finish timeline would run over 28 days. 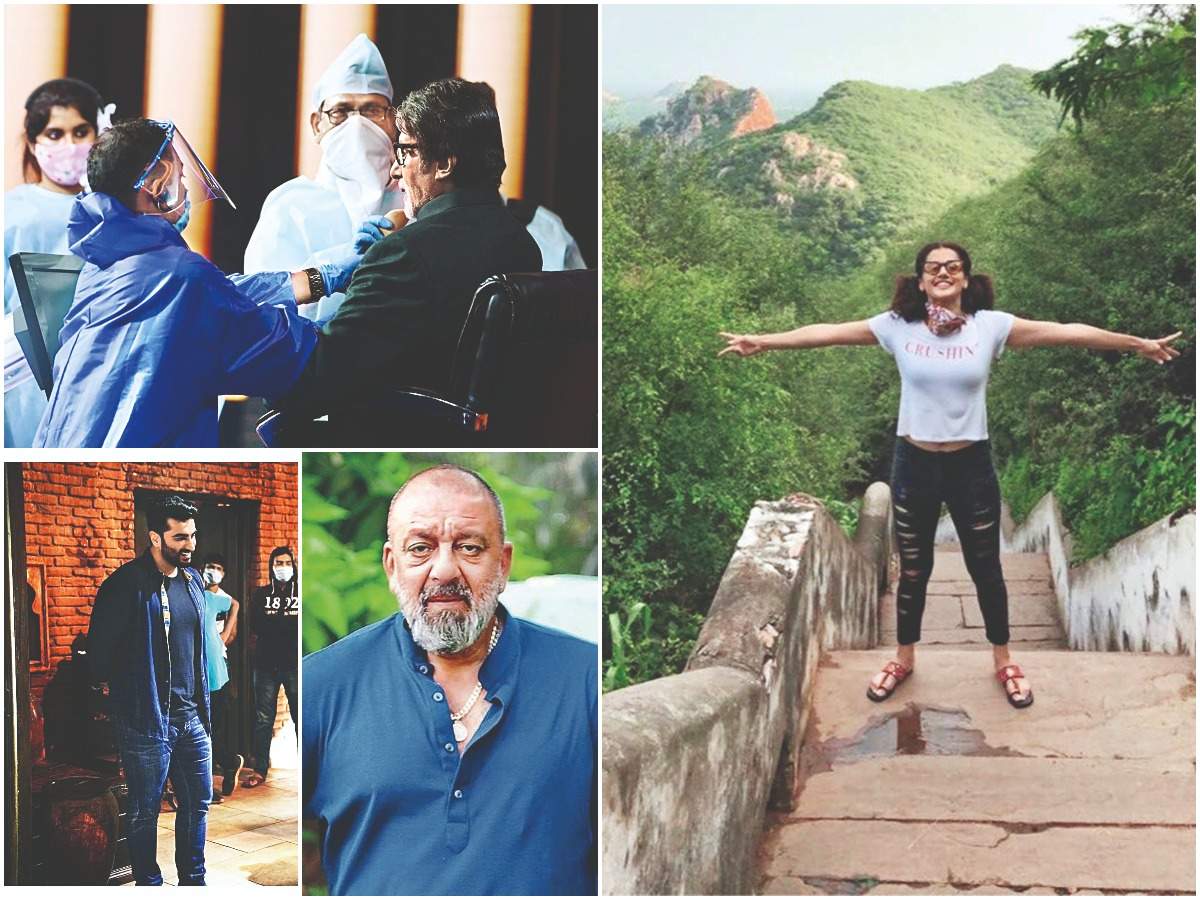 Madhuri Dixit Nene is back on camera
Madhuri was spotted in a suburban studio a few days ago, all set to shoot again.

Dubbing her now, shoot soon for Ranbir Kapoor & Alia Bhatt
Ranbir and Alia have started dubbing their film “Brahmastra”, and they will soon start filming the final film program. The program is expected to last 10-15 days, during which a song will also be toured.

Sanjay Dutt faced the camera before heading to Dubai

Sanjay was spotted in a suburban studio on September 7. The actor, who has reportedly been diagnosed with lung cancer, has three projects on the floor. According to reports, he was shooting for his film with Ranbir Kapoor. He also doubled for his film Kannada. On September 15, he and his wife Maanayata left for Dubai, where his children have been staying for several months. He should be back in town in a week.

John Abraham to visit Lucknow
John is expected to start filming his movie, ‘Satyamev Jayate 2’, in Lucknow this month. Manager Milap Zaveri visited the city in August to locate locations, which will include the outskirts of Lucknow. While the first film in the franchise was shot in Mumbai, the director reworked the script for the sequel during the lockdown and moved the story to Lucknow from Mumbai. A date for the shooting has not yet been set. 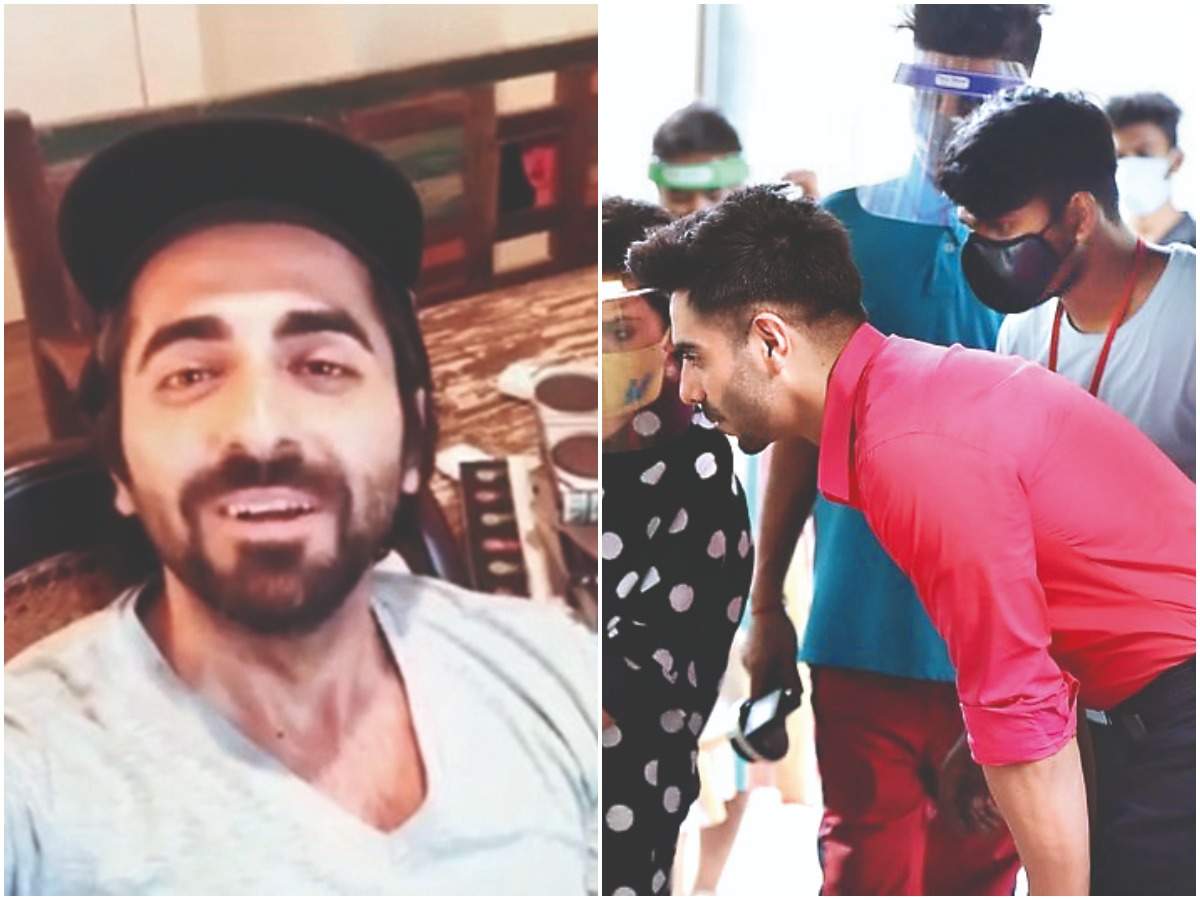 Ayushmann Khurrana shoots commercials, while brother Aparshakti finishes his film
Ayushmann, who has lived in his hometown of Chandigarh for some time, has recently launched a number of advertising campaigns. He is also preparing his film with Abhishek Kapoor. His brother, Aparshakti, shot for an advertising campaign shortly after his return to Mumbai. He has also completed the filming of the film, “Helmet”, where he will be seen opposite Pranutan Bahl.

Sonali Bendre & Raveena Tandon provide insight into the new normal
Sonali Bendre shared a video on social media, which gave an overview of the various security measures implemented on the set. The actress shot for a commercial with a small crew. Raveena also shot an advertisement for which a minimum of crew was present. In fact, she did makeup and hair herself.

Randeep Hooda returns to the dubbing studio
Randeep, who recently had leg surgery, took over the dubbing for “Radhe”. The actor shared a selfie from the dubbing studio and wrote, grateful to be back at work (sic). The film, directed by Prabhudeva, sees him reunite with his “Kick” and “Sultan” co-star, Salman Khan.

Bhumi Pednekar and Vidya Balan will return to work soon

In the coming weeks, other Bollywood stars will resume filming their respective projects. Next month, Bhumi will begin the quilting of his horror thriller, “Durgavati”. Around Diwali, Vidya will also return to face the camera, as the second program of her film, “Sherni” begins.