The job of the US president is not to entertain the world; he’s not supposed to be a clown. Likewise, and at a much lower impact level, it’s not the job of TV news channels to keep viewers engrossed in the drama of what are essentially reality TV shows. 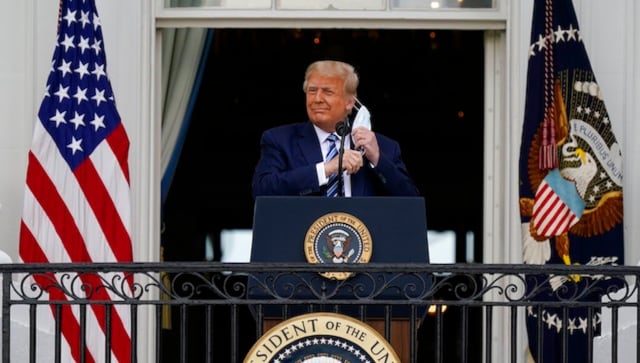 President Donald Trump takes off his face mask to speak from the balcony of the White House’s Blue Room to a crowd of supporters in Washington. AP

Joining the Dots is a bimonthly column by author and journalist Samrat in which he links events to ideas, often through analysis, but sometimes through satire.

On the other side of the world, the elections in the United States are just days away, and President Donald Trump, who has managed to get COVID and recover from it, is now very late in all the major polls with large margins. His chances of re-election seem slim at the moment, although it isn’t over until he leaves the White House, which he would be loath to do as a real estate man. He certainly finds the approval of unusual quarters. The Taliban expressed hope he would win. North Korea, whose leader Kim Jong Un he called Rocket Man Kim in return called him a mentally deranged American dotard, sending half of America scrambling to find the meaning of dotard recently touted the mysterious and wonderful chemistry between the two and called Democratic candidate Joe Biden a rabid dog whose candidacy is enough to make a cat laugh.

The common thread that has linked, and still does, the dramatis personae involved in these very disparate issues is entertainment, and what people find entertaining. I know several people, including, unfortunately, my own father, who regularly watched hot news talk on TV for entertainment. Some of them thought it was funny. A fairly experienced journalist friend had the curious habit of coming home from work after midnight and watching a little Republic TV while having her last drink to relax and have a few good laughs before bed. Others just liked to get their adrenaline pumping with minimal effort, a way to do cardio without going to the gym, although if taken too seriously, a heart attack or stroke were distinct possibilities.

Trump had a similar appeal. He was funny, a clownish character with strange hair and the most outrageous lines. During his 2016 election campaign, he made statements that no one had ever heard or imagined that a US presidential candidate would make. He sounded his own trumpet saying things like I’d build a great wall, and no one builds walls better than me, believe me, and I’ll build them very inexpensively, I’ll build a great, great wall on our southern border. And I’m going to ask Mexico to pay for this wall.

His particular style became such a rage that a slew of viral videos appeared in response to his America First slogan, with comedians from country to country parodying people speaking like Trump and asking if their country could be second. Board games were created with cards with his most bizarre statements printed on them, which were mixed in with other bizarre statements that he didn’t actually make. The game is about guessing which ones are real, genuine Trump quotes and it’s a very difficult quiz. I know. I played it and lost. I mean, who guessed the guy was actually comparing gay marriage to golf?

The allure of Trump, who made his mark as a reality TV star, and news channels in India that became reality TV channels at all but name, are similar. The characteristics that propelled Trump and star anchors like Goswami are bulk, rudeness, an endless ability to make outrageous statements, and a blissful disregard for the possible impacts their words have on the lives of others. These qualities were obviously attractive to many people. A general feeling of being suffocated by an excess of political correctness had spread around the world, and many people seemed to relish the spectacle of what could not be said shouted out loud. The fun is now worn out. It’s like watching the same circus routine day after day for years. At first it might be new and fun, but after a while it loses its novelty. At the same time, the harm done has become glaring. The job of the US president is not to entertain the world; he’s not supposed to be a clown. He is supposed to provide responsible leadership to his country, which happens to be a superpower, in a way that is good for Americans and the world. Likewise, and at a much lower impact level, it’s not the job of TV news channels to keep viewers engrossed in the drama of what are essentially reality TV shows. Their main job is to accurately inform viewers about what is happening in the country and the world, in a way that generates more light than heat.

Americans and Indians now collectively pay a heavy price for all free entertainment. America leads the world in the number of COVID-19 cases, India in second. China, where the pandemic started, has a larger population than these two countries. It is also less developed, even now, than the United States. However, he managed to get the situation under control a long time ago. Meanwhile, the Americas’ position in the world has shrunk more rapidly over the past four years than in any comparable period of time in living memory. Trump went to the White House on behalf of Making America Great Again, but did no such thing. The country is sick and more divided than at any time since the civil war. His last dice roll is now religion; he is busy playing the Catholic card.

In India too, it was people who wrap themselves in the flag and claim to represent a religion that pushed it into the hole where it is. They have also divided the country in search of television audience or electoral gain, while making noise about Making India Great Again. The country and its people have arguably not been in a more difficult situation at any time since independence, although you might not realize it if you hear your news from certain channels. Therefore, we have to thank our stars, the Bollywood ones, for finally coming to the rescue of the nations by taking action that could correct this. Their case could put an end to the culture of divisive reality TV dramas masquerading as news. These dramas have contributed to a global culture of false patriotism becoming the first refuge for many scoundrels, while the real things that improve the strength and health of the country, such as healthy institutions, which are the organs of state, and a robust economy, which is its lifeblood has declined.

Hopefully the US elections and the case of Bollywood will herald a turnaround, towards a world where reality TV programming does not spill over into the US presidency, nor into the news of the day. Those who like this entertainment are welcome, just watch old episodes of The apprentice, or the next season of Big boss. The COVID deaths and economic ruin are not worth all the joys anyone could get from watching people say nasty things out loud.