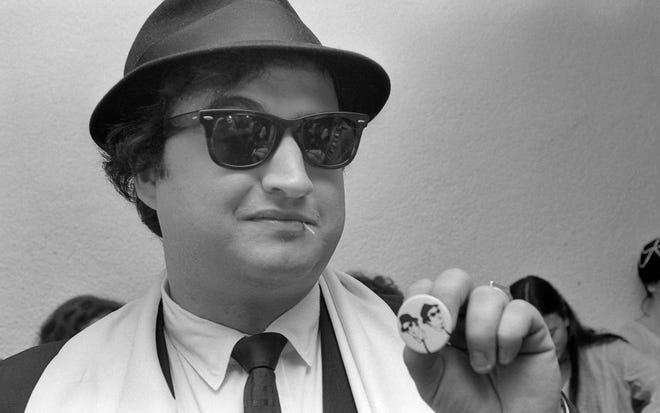 We all know John Belushi, the actor.

During his too short career of around a decade, the late actor and musician made us laugh “Saturday Night Live” and “The National Lampoon Radio Hour” and in comedy classics on the big screen“House of animals” and “The Blues Brothers”. But Showtime’s new documentary “Belushi”, First Sunday (9 EST / PST), paints a more detailed picture of the lovable but tortured funyman, who died in 1982 at the age of 33 from a cocaine and heroin overdose.

“He was quite bright, literate and very politically motivated in his youth,” his widow, Judy Belushi Pisano, told USA TODAY. “His early work was very satirical and clever. Maybe it got a bit lost with ‘Animal House’ being a blockbuster movie and its character being so different from that. But he was a pretty diverse man.”

Here’s what else we learned about him in the RJ Cutler-directed documentary (“The War Room”), which features previously unseen interviews.

What to broadcast this weekend:‘Mangrove’ by Steve McQueen, ‘Run’ by Hulu, another ‘Princess Switch’

His drug addiction was caused in part by an injury

The film extensively explores Belushi’s struggles with drug and alcohol abuse, “at a time when we did not culturally realize (that) the burdens of addiction and the tools for drug addicts to overcome them. disease did not exist, ”Cutler says. “As he struggled to overcome the addiction, it was stigmatized. It wasn’t the sort of thing, especially a celebrity, who would come forward and ask for help. So the people in her life weren’t sure where to turn.

Cocaine was a part of his life during the difficult ‘SNL’ holidays, which premiered in 1975, but drugs became a real problem for Belushi two years later, when he was prescribed pain relievers after surgery. Knee. “It’s a familiar story that has claimed the lives of hundreds of thousands of Americans, so we understand it better now,” Cutler says. “But for John it was, you give an addict pain relievers on an unlimited prescription, and nothing good is going to come out of it.”

He had a tumultuous relationship with Lorne Michaels, the castmates of ‘SNL’

Belushi created indelible characters during his four-season tenure on “Saturday Night Live,” including belligerent Samurai Futaba and “cheeburger” -peddling Pete Dionasopoulos. But his relationships behind the scenes were tumultuous at times: he was jealous of fellow Chevy Chase, the show’s star in Season 1, and clashed with creator Lorne Michaels from the start.

“The Lorne-John dynamic is fascinating. It was kind of a very powerful symbiotic relationship, ”Cutler says. “There was a lot of conflict at heart, because you had two visionaries who met at the birth of ‘Saturday Night Live’. John was to take a step back for the show’s first year as Lorne’s creation comes to life. And while Chase’s ‘slapstick, preppy boyish humor’ initially stole the show, Belushi was the show’s ‘lawless spirit and revolutionary force’.

But the actor also subscribed to some sexist ideas about women in comedy. Cast member Jane Curtin and writer Anne Beatts recalled how disrespectful he was to women and difficult to work with. He said women weren’t funny and refused to appear in sketches written by them.

That said, “he wasn’t the only idiot, and you wouldn’t accurately describe him if you didn’t say so,” Cutler says. “Judy’s take was that he was a jerk to a few people, not all of them. And then he paid the price. It damaged his friendship with Gilda (Radner), which was a shame.”

The film highlights the offscreen friendship between Belushi and Carrie Fisher, who appeared in 1980s “The Blues Brothers” and was briefly engaged to Belushi co-star Dan Aykroyd. The two bonded through their shared experiences with fame and drugs, Belushi Pisano says, and Fisher acknowledged how difficult it was when he got sober in 1980.

“We envisioned John’s year of sobriety as a respite and a triumph, and she took it as a heavy burden,” says Cutler of Fisher, who died in 2017 at age 60. (She suffered cardiac arrest and had several drugs in her system, including cocaine.)

Belushi relapsed during the production of 1981’s “Neighbors”, a few months before his death. Producer Richard Zanuck recalls in the documentary that the actor sometimes refused to come out of his trailer and was “totally out of it. One time we had two guys behind him holding him off the camera. It was that way. the kind of shape he was. in. “