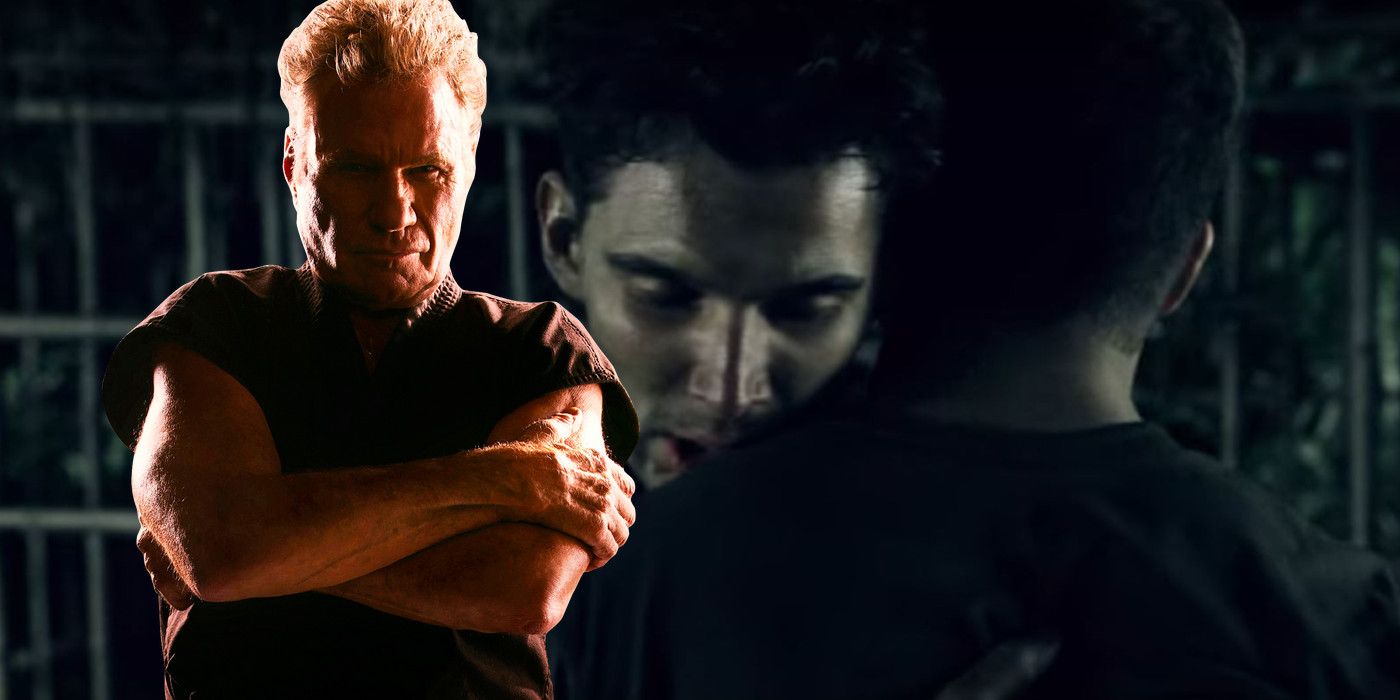 Cobra Kai Season 3 reveals new details about John Kreese’s backstory but, rather than sympathetic, it makes him an even scarier villain.

Cobra Kai Season 3 dived into John Kreese’s backstory but, rather than making him likable and setting him up for redemption, it just made him really terrifying. Played by Martin Kove, Kreese was a major antagonist in the original trilogy of The Karate Kid movies. AsCobra Kai’s zealous sensei, he guided Johnny Lawrence and others through Daniel LaRusso’s merciless attack in the franchise’s first installment. Back alongside Terry Silver and Mike Barnes in The Karate Kid 3, he sought brutal revenge against Mr. Miyagi and Daniel-san. The plan again ended in defeat and humiliation.

John Kreese has returned once again in Cobra Kai. For a while, it seemed like he could have really changed with his homeless status (living in a men’s shelter), eliciting sympathy from Johnny. However, Kreese’s old habits eventually resurfaced. Having taken control of the dojo, he has poisoned a new generation to embrace his uncompromising ways. Simultaneously, flashbacks shed light on Kreese’s past and the true origin of the Cobra Kai dojo’s “merciless” mantra. While the new details fleshed out Kreese and made him more human, they didn’t serve to make him likable or facilitate redemption. Instead, the flashbacks simply demonstrated what made him the bad guy he was and pointed out that he was, in fact, a truly terrifying individual.

For decades, John Kreese has been viewed as larger than life and, arguably, even a somewhat cartoonish villain. However, his flashbacks plunged headlong into what fueled his logic and peculiar processes. Likewise, these scenes showed how deeply rooted his methods are in serious psychological issues. At the start of the new episodes, it was revealed that he lost his mother to suicide. Meanwhile, later in Cobra Kai season 3, Young Kreese suffered another tragic loss when his girlfriend was involved in a fatal car crash. He was already fearless to the point that he was accused of having a death wish. As a result of this last death, however, he truly became a man with absolutely nothing anchoring him to his previous humanity.

Kreese had fought his whole life and his survival had always been second nature to him. It wasn’t until he had lost everything, however, that he was finally able to cross the line his captain had pushed him to. In a case of poetic irony, it’s letting that same captain die who completely anchored Kreese’s mentality. It was that moment that sealed him that there was no common ground. Survival had to mean the absolute defeat (or death) of your enemy whether in the dojo, on the streets or in competition. contrary to The Karate Kid 2‘s Chozen, who had turned around, that black and white distinction remained intact and nestled even deeper into Kreese’s personality.

This mentality previously seemed overdone, given the context of the films. By describing the genesis of his mental scars, however, Kreese has become a psychologically disturbed character on a much more conceivable level. Kreese’s belief further solidified in the immediate consequences of rescuing Terry Silver when Kreese was caught in a brotherly embrace and incurred a lifetime debt. One of the reasons Kreese enlisted in the military was to be a hero. And, at that time, he received his wish. With this gesture, Kreese got an apparent reward for his newly ruthless demeanor and the closest thing to warmth he could possibly still feel.

Like everything else in the flashbacks, it added a deeper and more visible context this time around as to why he continually returned to teaching. Kreese longs for both the satisfaction of violence and the admiration of those who admire him. Almost like a serial killer, it was all about recreating that experience in Vietnam. He had developed a need for this hero worship. This cycle of ruthless victory followed by immense gratitude gave him a renewed purpose and a way to justify his deranged actions. It also explained why he lashed out at murders whenever he was denied such grateful loyalty. That’s all he has. This is what he has lived for most of his life. And he wouldn’t let anything other than death stop him. As such, even the most absurd elements of Cobra Kai – like settling violent and illegal feuds with the All-Valley karate tournament rather than the police – are now based on richly explored characterizations.

More: What To Expect From Cobra Kai Season 4


John Atkinson has been a short story and feature writer for Screen Rant since late 2018. Prior to that, he had published articles at a number of different outlets. A graduate of the University of London, John was brought up on a small island by television and film. As such, he pursued a career in screenwriting and film journalism when it became apparent that it was impossible to become Spider-Man. John’s greatest wish is to one day produce his own film. Until then, he’s more than happy to spend countless hours talking about it. John’s love for film and television defies genre and sometimes even logic. Nothing is off limits to his passion – whether it’s Marvel, DC, Rian Johnson’s Star Wars, or Tommy Wiseau’s latest cinematic offering. Away from the screens, John can often be found in a park reading mystery and / or fantasy novels, jumping up and down at various musical events, or thinking too deeply about Keanu Reeves’ career and the reasons why Edgar Wright doesn’t have an Oscar.