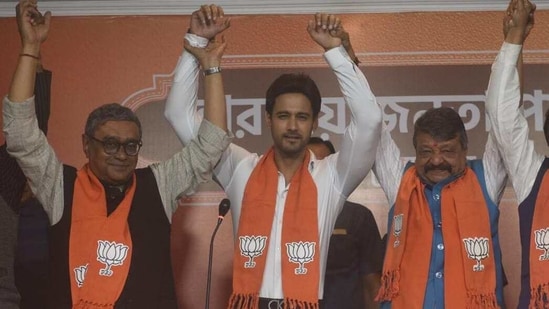 There were ripples in the Bengal film industry on Wednesday when Yash Dasgupta, a young and popular movie star, joined the Bharatiya Janata Party (BJP) as veteran actor and double Trinamool Congress (TMC) lawmaker ) Chiranjit Chakraborty wrote to Chief Minister Mamata Banerjee that he would quit politics if the party decided not to present him in the assembly polls to be held in March-April.

A day after Bengal’s most popular actor and Bollywood veteran Mithun Chakraborty made headlines when he welcomed Rashtriya Swayamsevak Sangh (RSS) chef Mohan Bhagwat to his Mumbai bungalow, fueling speculation about his Returning to politics, the BJP’s Bengal unit has made notable forays into Tollywood, as the states film industry is popularly called since most of the studios are located in the southern Kolkatas Tollygunge region. Chakraborty was a member of Rajya Sabha of the TMC until his resignation from the Upper House in 2016.

The BJP began to increase its presence in Tollywood soon after winning 18 of Lok Sabha’s 42 seats in the States in 2019. On July 18 of this year, no less than 13 actors joined the BJP in Delhi and Kolkata. . While none of them are stars, all of them are popular faces on TV or the big screen. For Chief Minister Mamata Banerjee, who counts several actors among her former MPs and sitting MPs, this was embarrassing because most of those who joined the BJP criticized ruling party leaders for controlling the industry and not let people work freely.

I am still young in the industry but I know politics is not a bad thing. Politics is about change. If you want to change the system, you have to be part of the system. I don’t want to be just an actor. The BJP has always put its trust in the youth. I believe I will have the opportunity to work, said Yash Dasgupta, 35, after joining the party with more than half a dozen actors, including Papiya Adhikari, a veteran.

Dasgupta is known to be a close friend of TMC member Lok Sabha and popular star Nusrat Jahan. Nusrat and I are good friends as actors. Our political identity has nothing to do with our friendship, he said.

The actors were welcomed to the BJP by National Vice President Mukul Roy, National Secretary General Kailash Vijayvargiya and Swapan Dasgupta, member of Rajya Sabha, at the party’s new media center at a star hotel in southern Kolkata.

The BJP does not challenge the Bengal polls simply to grab power. We want to revive the old glory of Bengal that has shown the way to the rest of the nation, said Vijayvargiya.

In an almost parallel development, Chiranjit Chakraborty, the incumbent TMC lawmaker from Barasat in North 24 Parganas and who has shared screen space with Mithun Chakraborty in several films, told TV channels he had informed the chief minister of his desire to quit politics and return to acting if the party decides not to present him again.

When I was first recruited in 2011, I told him that I did not belong to the world of politics. I also didn’t want to compete in 2016 but she insisted that I do. I want to make it clear that I will never join any other party if I leave politics, he said.

Interestingly, speculation has started since Tuesday on Prasenjit Chatterjee, another famous and award-winning actor.

Anirban Ganguly, a senior member of think tank BJPs, met Chatterjee, the States’ most popular face among leading actors and the son of former Bollywood superstar Biswajit, at the latter’s residence and presented at the actor a copy of his book on Amit Shah. Since Biswajit joined the BJP in Delhi in January 2019, the meeting has fueled rumors that his son may also join the saffron camp.

Ganguly said the meeting had nothing to do with politics. I have met him on a personal level. Prasenjit is an icon in Bengal. Not everything should be judged from a political point of view. He has great esteem for the Prime Minister and the Minister of the Interior of the Union. We often meet eminent people just to interact and exchange views. Amit Shah started this, Ganguly told HT.

Until Wednesday evening, no TMC leader reacted to so many actors joining the BJP.

Vijay Deverakonda to speak Hindi in the Bollywood movie Liger; His army of fans can’t contain their excitement