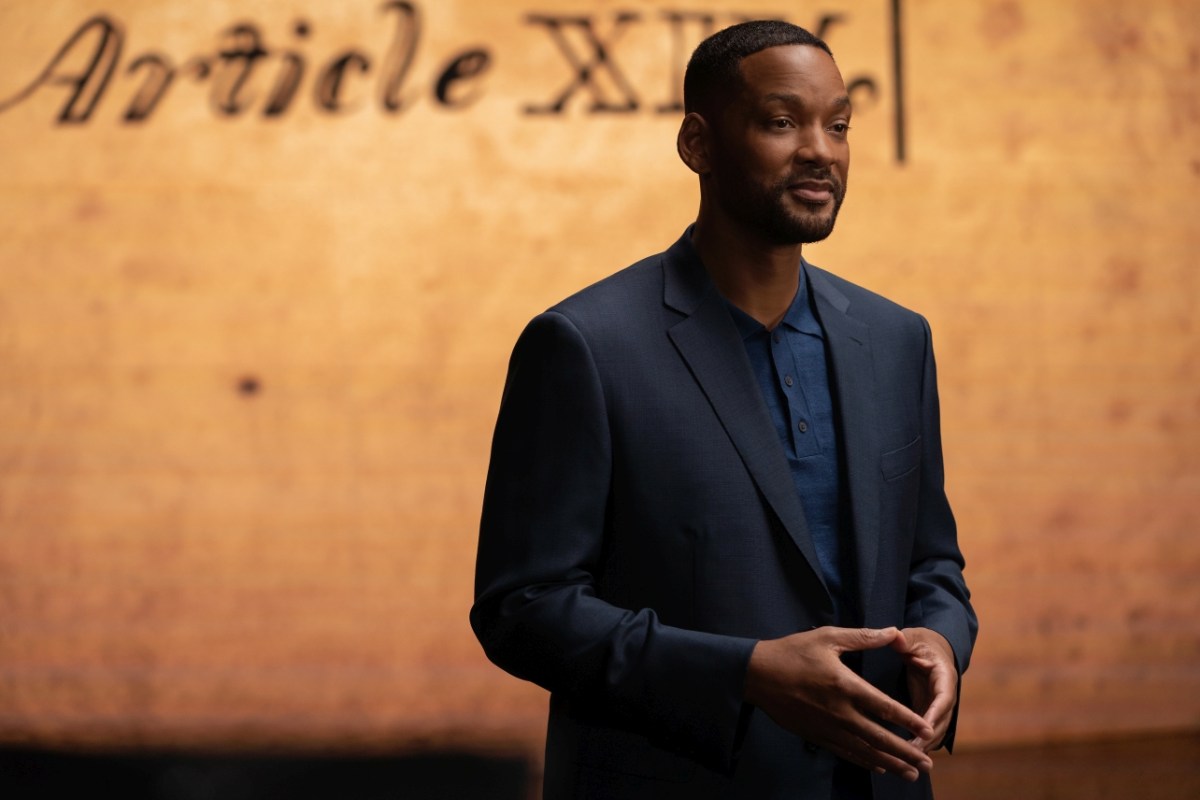 The idea of Amend: The Fight for America, directed by Kenny Leon and counting Will Smith and Larry Wilmore among its executive producers, is that the most important amendment to the Constitution, the 14th, is not well understood even by those who defend it the most. Simply put, the 14th amendment, ratified in 1868 at the start of post-Civil War reconstruction, that everyone born in the United States is a citizen, and that natural and naturalized citizens all have the same rights. No state is allowed to create laws that infringe the rights of one or more citizens.

Opening shot: The Statue of Liberty is presented on a large video screen. Will Smith comes out of a door and says, “What do you think of when you think of America?”

The essential: Through an interesting combination of expert interviews, archival photos, illustrations and documents, and dramatic readings of historical writings by celebrities, Smith tells the story of the birth of the 14th Amendment and its impact on politics and the lives of Americans to the present day.

The first episode focuses on how the Amendment was born, through the eyes of Fredrick Douglass, a slave who escaped to New York in 1838 and, as a free man who always knew that hunters of slaves could send it back to its owner, became one of the main authorities in the country on abolition. Mahershela Ali reads the writings of Douglass, where he discusses his years as a slave and how it felt to be free, while still looking over his shoulder.

We hear Wilmore, Yara Shahidi, Randall Park, and others talking about various aspects of slaves not being considered citizens, even those born in America. And, despite the fact that there were abolitionists who thought the Constitution was a racist document with no place for blacks, Douglass saw that it just didn’t go far enough, at least in its original form. And, as the story enters Abraham Lincoln’s administration – Pedro Pascal does dramatic reads of Lincoln’s writings, including the Gettysburg speech – how Lincoln and Douglass both saw the situation is contrasted.

Lincoln was not an abolitionist; in fact, he didn’t think whites and blacks should coexist in the same country. But when the Union started losing the war and he had to a) preserve this union and b) get more people to fight alongside the Union, he drafted the Emancipation Proclamation.

What will this remind you of? Amend: The Fight for America would fit well with two recent docuseries: CNN’s Lincoln: we are divided and PBS The Black Church. In reality, Edit and Lincoln interview some of the same experts.

Our catch: We get what Smith, Wilmore and the other EPs from Edit (which was created by Robe Imbriano and Tom Yellin) were trying to accomplish with the series format: they wanted to take what could have been a dry docu-series on the 14th Amendment and make it stand out with the celebrity monologues, whether they were readings or just modern takes on what things looked like at a given time (Park and Wilmore’s monologues were like that). But the mixed format of this series obscures information in a way that makes things slide instead of moving.

We don’t know why Smith and Wilmore decided to film the celebrity speakers in formal attire in an empty studio, with footage sometimes appearing on the screens behind them. Yes, just hearing their voices may have had less of an impact on pop culture, but it seems irrelevant to see Pedro Pascal in formal attire trying to emulate Lincoln, for example. In an effort to make the episode information – and there was a lot of good information – more accessible, it simply interrupts the flow of storytelling and expert interviews.

Another issue with the first episode was the tone. Smith had some really fun storytelling moments, especially when he was on camera, as did Park and Wilmore during their monologues. But the rest of the episode was serious, even solemn. Again, for what purpose? If you want the information to be accessible, why not make the entire episode a little funny? The tone seemed to change so much during the first episode that we weren’t sure if we were watching something aimed at adults or kids (it’s definitely adults, considering its TV-MA rating).

That being said, few shows will spend so much time looking at a single constitutional amendment, even one as big as the 14th. So if you can get past the tonal changes and distracting celebrity monologues, you’ll get a lot of information about the 14 that you did not know.

Starting shot: Smith recounts how the 14th was attacked upon ratification. “Why haven’t we learned the story of the 14th Amendment? Because there are a lot of people out there who fought really hard to make sure you never know it.

Sleeper Star: No. Given how entertaining celebrity monologues are, there aren’t really any that stand out. Maybe seeing Joseph Gordon-Levitt take one for the team and play Andrew Johnson deserves some credit. Some of what Lincoln’s successor has said is pretty bad.

Our call: Post it. Despite its flaws, Amend: The Fight for America is a very informative documentary series on a part of our Constitution that is most misunderstood and overlooked, especially given its importance to the way we live our lives in the United States.

FluxAmend: The Fight for America On Netflix

His career and ‘The Mauritanian’ – Actor side – Deadline