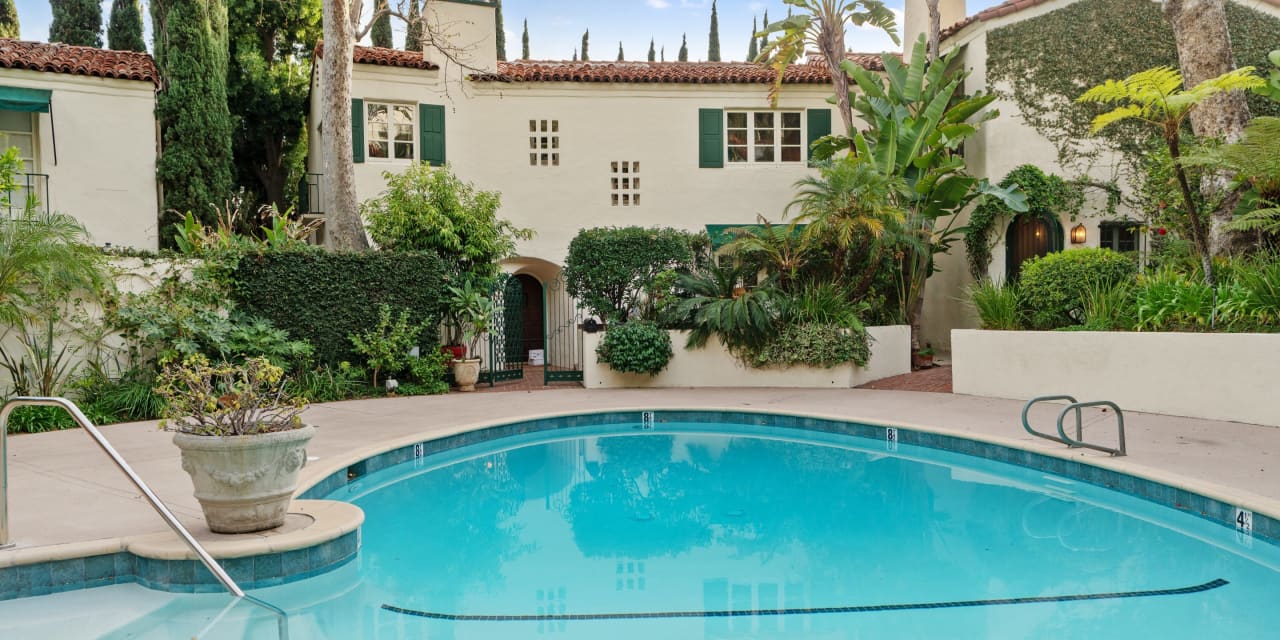 A historic Los Angeles home that once belonged to Margaret Hamilton, known as Wicked Witch of the West in the 1939 classic The Wizard of Oz, was listed last week for $ 2.4 million.

With three bedrooms and three and a half baths on approximately 3,000 square feet, the townhouse is the largest of five residences at the Courtney Villa complex on the Sunset Strip, according to Compass listing agent Jill Galloway.

The residence is one of five houses that make up the Courtney Desmond Estate, a Spanish Revival and Mediterranean style community that dates back to 1926. Designed by architects Frank H. Harding and George J. Adams, it has been declared a cultural monument landmark of Los Angeles in 1989.

At the center of the development is a round swimming pool surrounded by lounge chairs and green and white cabanas.

You walk in and expect to see Joan Crawford at the pool, Ms Galloway said. It sounds a lot like the Beverly Hills Hotel or something out of the Cary Grants home movies. It’s so old school.

Inside, the house has been completely renovated and has an open layout with living room, study and dining area, built-in lights and a kitchen, which has oversized windows overlooking the park, as well as double ovens, a island and bar.

In true Californian style, indoor-outdoor living has been maximized on this property. French doors connect the ground floor to the rear courtyard, which includes a fountain, gardens and a lawn area.

The master bedroom has an office, walk-in closet and en-suite bathroom with two sinks and a bathtub, as well as access to the roof terrace, according to the listing. There is a second en-suite bedroom, as well as a bedroom / screening room with a private terrace.

Hamilton, who died in 1985, was a kindergarten teacher when she landed a role in the 1932 Broadway play “Another Language,” according to her obituary in The New York Times. It was turned into a movie, which brought Hamilton to Hollywood. Mansion Global was unable to determine when she lived in the house.

At Penta: National holidays and buy-in developments tailor a year for pandemic

Current owner Roberto Aguirre-Sacasa, playwright, screenwriter and creative director of Archie Comics, purchased the property in 2016 for $ 1.86 million, according to public records. Mr. Aguirre-Sacasa, 47, is known for his work with Marvel Comics and on the TV shows Glee, Big Love and Riverdale. He shares the house with her husband, Barclay Stiff, a production manager.

“It’s a really special place and not just because the Evil Witch of the West lived there!” Mr. Aguirre-Sacasa said in an email. The first time we walked in we smelled it. You can gaze from the front door, through this wonderful living room, and into the lush private gardens with this amazing fountain … Safe, Private, Quiet A classic Hollywood treasure.