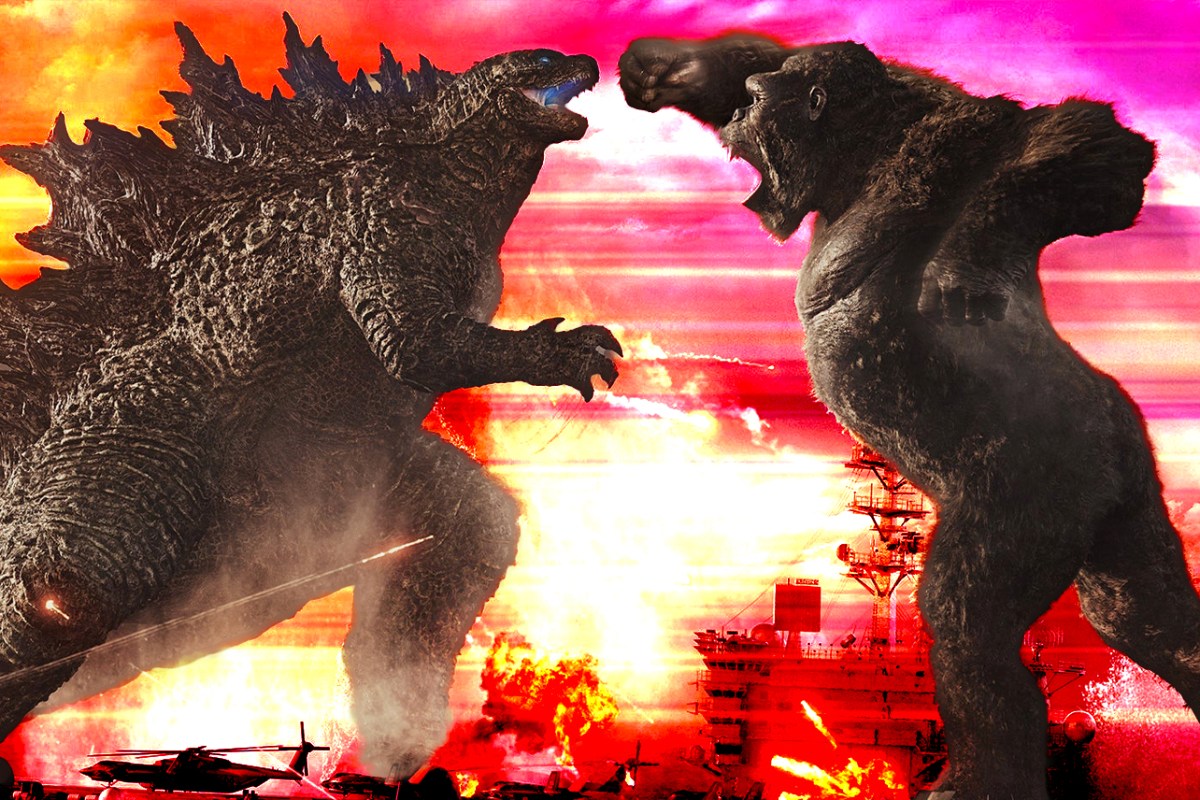 “ONE” launches the trailer for Godzilla vs. Kong.

This. Is. Heartwarming. Confusing. Frankly annoying, even. Because when the most powerful of all kaiju “titans” clash in a battle for the ages, everyone loses. Everybody! And not just because many buildings will be destroyed (not to mention all those inevitable civilian casualties that go unrecognized). But mostly because Kong and Godzilla are great guys. Defenders of humanity and the Earth. Behemoths fierce in virtue. Beloved movie monoliths that figure prominently in many of our memories of Saturday afternoon TV mornings.

They cannot die. They never will really die, so let me rephrase: we can’t see them die again. It’s hard enough to see Godzilla blazing Kong’s ass, or cringe as Kong rotunders Godzilla’s jaw in the bay. It’s not fair, let alone true of Captain America slamming his shield into Iron Man’s tin can.

Let’s face it: watching the super colossal gorilla and the brobdingnagian lizard fight is like watching your parents fight. It is heartbreaking. Psychically heartbreaking. Traumatic. And throwing all the paper planes you can at them won’t stop them. They hunt planes like midges, remember. Monsters to real ones, that is to say – and your parents to papers too, most likely.

This battle took place before, of course, in 1962 King Kong vs. Godzilla. There was once a popular urban legend that had two endings: Kong winning the battle in the American version of the film and Godzilla coming out victorious in the Japanese version. But that’s not true – in both versions, the two creatures fall into the sea, and Kong soon surfaces and swims. Ambiguous? Perhaps. But if you interpret this as anything other than a dead end, you are a top notch nincompoop. It’s obvious that Godzilla, who dwells underwater when he’s not burning Tokyo with his Nacho BellGrande breath, dragged Kong under to drown him, but the monkey struggled to break free and cleverly took the toss. Live to fight another day, in a sequel maybe (that didn’t happen), and prevent the partisans from declaring any sort of victory. That’s insane, of course, but he wisely admitted that declaring a winner makes us all losers.

Of course, for movie studios hoping to capitalize on decades of thrilling nostalgia, pitting beasts in battle is a no-brainer. But for my inner eight-year-old – who checked the Kong and Godzilla Movie monsters books from the school library countless times, who tearfully yearns for his Godzilla toy with the throwing fist and the “tongue” of flame on a trigger – it’s worse than opening a deck of Garbage cards Pail Kids and get all doubles. Godzilla vs. Kong promises to KILL one of the two most beloved movie monoliths of all time, and it’s a concept I just can’t fathom.

Remember, Kong did not survive his 1933 fall from the Empire State Building, and this is one of the saddest scenes in movie history: “It was the beauty that killed the beast ”, my ass! No, ignorant men tried to conquer and exploit a natural wonder and then were shocked when Kong switched to bananas for his adorable Fay Wray bait. fully healthy and consensual relationship and fought back. Also remember that Godzilla rose from that deadly reel at the end of his first pedestrian adventure, inspiring a touching moment: He was the product of humanity’s misguided nuclear weapon ambitions, returning to teach a lesson in causing destruction.

That, and they’ve become downright adorable over the years. In dozens of wonderfully bizarre films, Godzilla has become an ally of humans, fighting his way through titanic battles and dancing like a goof after hitting titanic rubber enemies like King Ghidorah and Megalon. Kong, meanwhile, went on to become a Toho Co. hero and protagonist of children’s cartoons, and skated with Naomi Watts in the enjoyable 2005 remake of Peter Jackson. I adore Godzilla and Kong and I hugged them and I hugged them and I will keep them in my garden, oblivious to the lessons given by Bart gets and elephant.

I’m surely not the only one who has affection for these noble creatures, otherwise the new MonsterVerse might not exist. It’s a fine franchise so far, despite its lack of human actors in latex costumes, plasticine army battalions, and cardboard towns set ablaze with explosive fireworks. I accept modern CGI upgrades and extravagances, staying firmly true to 2014 Godzilla, with its tantalizing slow reveal of our titanic hero, richly satisfying monster battle silver shots, and subtextual claim that Godzilla is evolution personified, destined by nature to restore the delicate balance of the terrestrial ecosystem by denigrating malicious giant insects in croquettes. . I also strongly vouch for the highly entertaining Jordan Vogt-Roberts Kong: Skull Island, a vibrant and fun and violent reintroduction of the revered ape, a consequence cartoon inspired by the comics and the camp. Even the imperfect Godzilla: King of the Monsters had its moments, teasing the existence of a whole new kaiju cavalcade.

But Godzilla vs. Kong seems to envelop the franchise – at least for now? Hopefully for now – offending some bad darling creation or another. Of course, this could be an example of a movie having its cake and eating it too. One could die and be defibrillated with a trillion nuclear volts when a different gigandomundus threat arrives (Mechagodzilla rumors abound!), A highly probable theory. And it wouldn’t be the first time a film has reneged on its trailer promise – or even the 100th.

But if that’s true, one of two scenarios will unfold: light will come out of King Kong’s eyes, and since he’s an ape and WE are all evolved apes, part of us all EVERY ONLY OF US will die. Or Godzilla will breathe his last radioactive breath, and the marvelous monster that captured our imaginations will sink to the bottom of the sea, to be unceremoniously devoured by crabs and plankton. Say it isn’t. Please say it’s not.

John Serba is a freelance writer and film critic based in Grand Rapids, Michigan. Learn more about his work on johnserbaatlarge.com or follow him on Twitter: @johnserba.