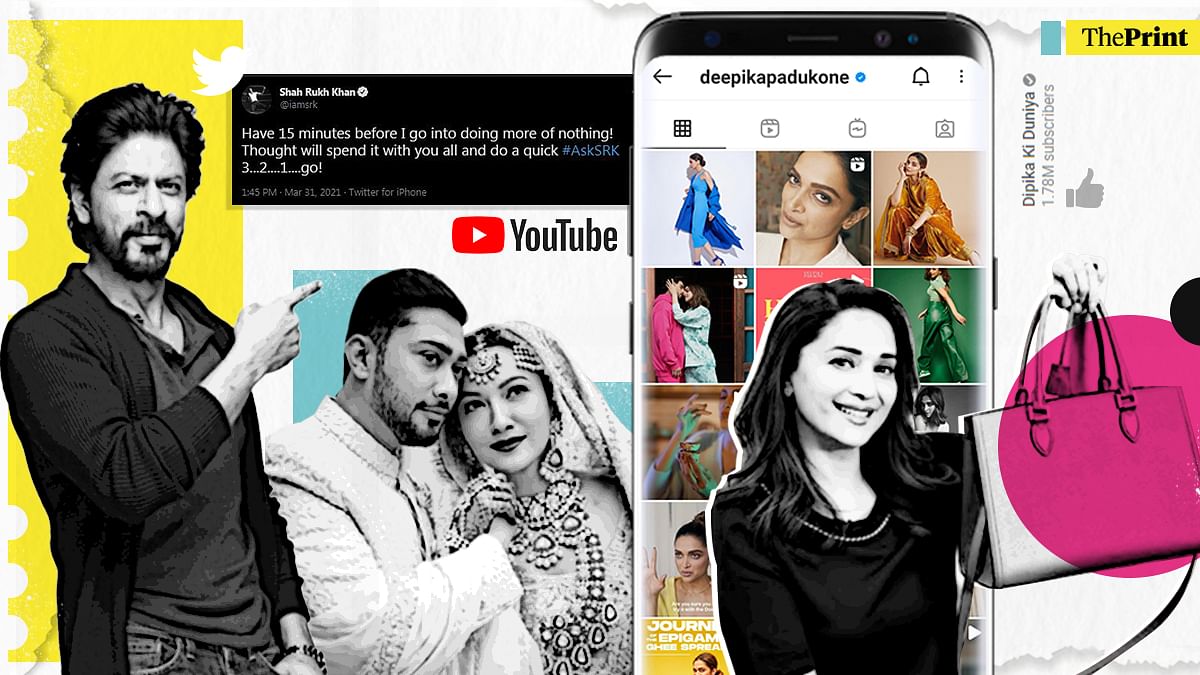 Madhuri Dixit shows you what’s in her bag, Deepika Padukone is rolling Instagram reels faster than fans can keep up, and TV actor Gauhar Khan shows us her marriage story on YouTube. Not to be outdone, Shah Rukh Khan was once again trending on Twitter this week with his AMA Ask Me Anything tour.

It is a universally recognized truth that you must have your game on social media if you are a public figure. Oddly, however, Bollywood has always caught up in this regard. But 2020, the year the world locked itself, brought back most of the stark reality of stardom: out of sight, out of mind.

Essentially, the celebrity cultural revolution that swept west Around 2015, when social media was the height of relevance, seems to have finally hit Bollywood and it’s not just movie stars, TV actors also realized the potential of this medium. Actors and spouses Dipika Kakkar Ibrahim and Shoaib Ibrahim the two have separate YouTube channels with 1 million subscribers each.

Gone are the days when being a celebrity meant you had to stay on a pedestal and away from ordinary people. Stardust and Femina are gone. Now it’s about sharing as much life as possible by revealing the person outside of the movie screen.

There’s a reason Kim Kardashian is arguably the most popular celebrity in the world.

As American entrepreneur Scott D. Cook once said, a brand is no longer what we tell the consumer, it’s what consumers tell themselves.

The YouTube video platform appears to be one of Bollywood’s favorites and it doesn’t hurt that it’s monetized. Bollywood celebrities like Madhuri Dixit, Alia Bhatt, Kartik Aaryan, Jacqueline Fernandes, Neha Kakkar, Shilpa rao all of them have channels with a fairly large audience.

And despite the fairly basic revamped content, compared to those who make YouTube videos for a living, their fame manages to garner millions of views. It seems like most celebs are getting the same PR advice these days.

Although one may not need Madhuri Dixits’ recipe for sabudana khichdi or modak with hubby Shriram Madhav Nene making a guest appearance, the actor’s name is enough for her to score more 8,00,000 subscribers. His videos also regularly get millions of views. And she’s been a constant vlogger with videos on popular topics like skin care, hair care, and everyday makeup.

Some celebrities have even started riding this bandwagon again. Look at the curious case of Deepika Padukone. It all erased old posts on January 1 of this year. What was mostly formal content that seemed to be posted by his team has now had a makeover. Deepika Padukone regularly releases colorful and stunning reels, all brand with his name. It’s about what’s on her playlist (Justin Bieber), those videos (she chooses filter coffee over cold coffee) and the Buss-It challenge (with Ranveer Singh).

Likewise, Alia Bhatts YouTube channel with 1.5 million subscribers, filled with fitness videos and healthy food, is also extremely popular. While she hasn’t posted in a while, the fact that a prominent actor like her ventured to start her own channel before most others speaks to YouTube’s influence.

Jacqueline Fernandes and Kartik Aaryan are also fairly dedicated YouTubers with 6.57,000 and 5.20,000 subscribers respectively. The latter has a range of videos on his channel including a series of interviews Koki poochega, where he interviewed personalities such as Barkha Dutt, Anupama Chopra and Farah Khan.

Priyanka chopra has always been very social media savvy, but her Instagram, with 61.7 million subscribers, is quite relevant. Since her one-to-one trip to the West, she has regularly posted articles on her book, series, production plans and has even started posting reels with her husband Nick Jonas. Both of her dogs have their own public Instagram pages.

Even Shah Rukh Khan, unlike other Khans, drives quite regularly AMA via Twitter, which let’s be honest, we’re all secretly waiting. And I guess if you’re SRK you don’t really need to do more than that.

Also read: Instagram Reels is waking up. He has no space for the TikTok gang

The people who actually capitalized on Indian belated love for the YouTube video frenzy are TV actors. Indian television is widely believed to be a rather volatile industry and when the lockdown was imposed in March 2020, hordes of actors flocked to YouTube.

TV actors like Gauhar Khan, Rubina Dilaik, Erica Fernandes, and Suyyash rai have popular channels. Most with millions of followers. Ask any regular YouTuber, reaching that million is no small feat.

Instagram is the other platform where it has become important to be successful at the game. You don’t have to be a top player to be popular on Instagram. The platform has also proven to be an adventure for relatively lesser-known celebrities and this is where social media really shines. Now, a Bollywood actor is not only known for the sum total of his career, there are many other avenues where he can make a living.

Malaika Arora Khan, with 12.6 million Instagram followers, is a prime example. His story is religiously followed by many people interested in fitness. In the same way, Mira Rajput, Shahid Kapoors’ wife, may not be a Bollywood celebrity, but she is quite active with her account, and her IGTV hair and skin care videos have been watched by millions of people. Now she endorses big brands via Instagram.

From the big screen to social presence

Social media has created a new generation of celebrities, with the rise of influencer culture. And the feed was generally going from social media to the big screen, but now it’s interesting that the feed is going more from the big screen to social media, especially in India. Not many people are interested in celebrities holier than you who wish to stay away from their fans.

How many people even remember someone like Angelina Jolie and Tom Cruise now. Gen Z don’t remember Cruise hopping on the Oprahs couch. Those days are over.

Social media has changed the definition of celebrity. And Bollywood is just catching up.

Drugs and Development in Afghanistan: Analysis of National Policies and Actors – Afghanistan