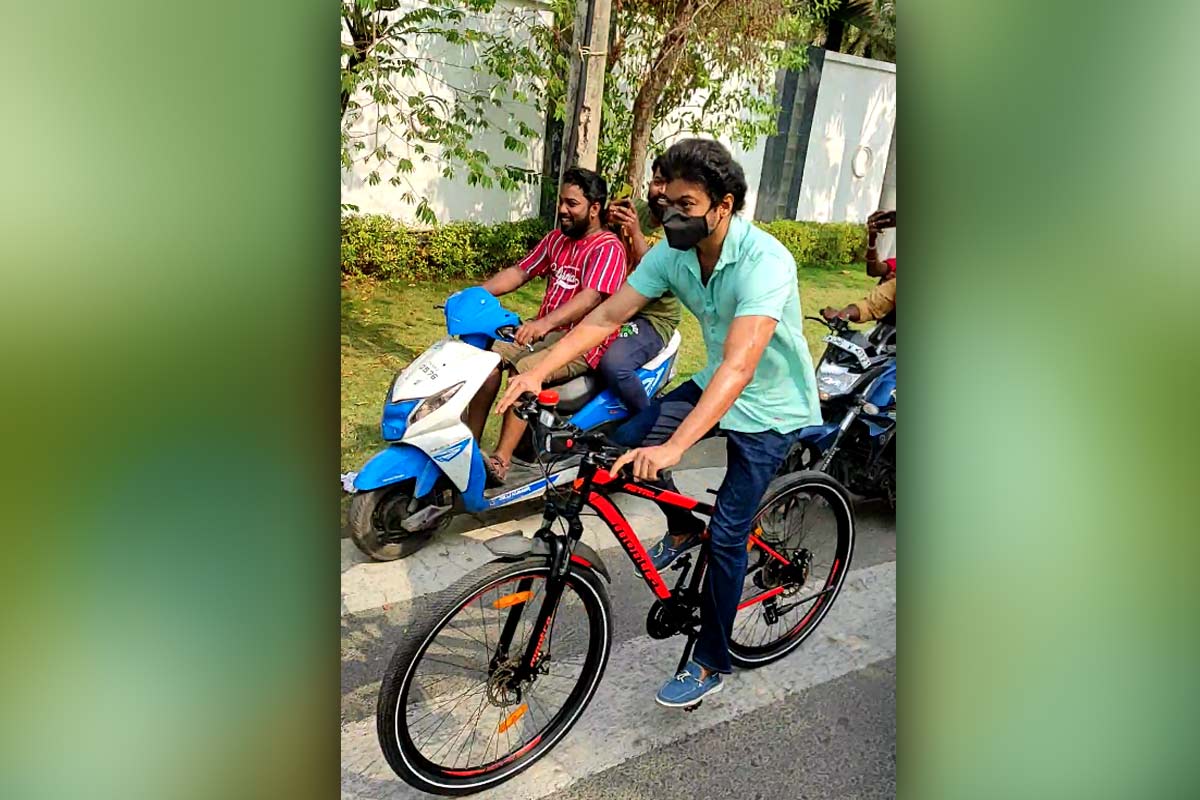 Vijay was seen riding pillion on the bike of one of his employees after casting his vote at Neelankarai.

When actor Vijay left his house on a bicycle to cast his vote on Tuesday morning, causing a massive flutter among voters, little did he think that he would be returning on a bike instead. The popular cinema star referred to as Thalapathy by his fans rode out in style on a red and black bicycle, flanked by some of his fans and employees, who followed him on bikes.

As fans fervently decoded the color of Vijays shirt and face mask, not to mention the subtext of the bicycle being a message against petrol and diesel price hike leave alone the meaning behind its color, the sensational bicycle fell off the spotlight soon after.

As Vijays entry drew in huge crowds, excited fans rushing in to catch a glimpse of their favorite star zipping through on a bicycle, the actor was forced to return by a bike instead. Vijay was seen riding pillion on the bike of one of his employees after casting his vote at Neelankarai. The crowd gathered outside the booth made it impossible for him to take the bicycle back home, and according to some reports, the actor couldn’t even reach the cycle in the crowd. The bicycle, we hear, had to be brought back later by one of his employees.

Vijays grand entry to the polling booth was the talk on social media with the hashtags petrol diesel hike and Thalapathy trending on social media. Many shared their own take on what the actors not-so-subtle political statement could have been. However, his team clarified that the only reason Vijay decided to ride a cycle to the booth was because it was just one street away from his house. “There is only one reason why Thalapathy Vijay came by cycle to cast his vote. The booth is in the street behind his house. It’s a narrow street, and it would be difficult to take the car there. There is no other reason for it , “Vijay’s team said.

It’s not easy to breath wearing mask, driving cycle under the extreme summer heat. But he did it in style

Its not just a ride. Its a Statement. .

With his arrival in cycle #Thalapathy surely made it clear to his fans which party he is not voting for # TNElections2021 pic.twitter.com/QdBIBpMxrO

Over the past few years Vijay has been critical of the AIADMK government films both in his films and in his statements made during his speeches. An example is his performance in Sarkar that released in 2018.

Vijay who was last seen on Lokesh Kanagarajs Master will next be teaming up with director Nelson Dilipkumar and Sun Pictures. For now titled Thalapathy 65, the film will also star Pooja Hegde and will have music by Anirudh Ravichander. Nelson Dilipkumar rose to fame with Kolamavu Kokila starring Nayanthara in the lead.

Show us some love and support our journalism by becoming a TNM Member – Click here.