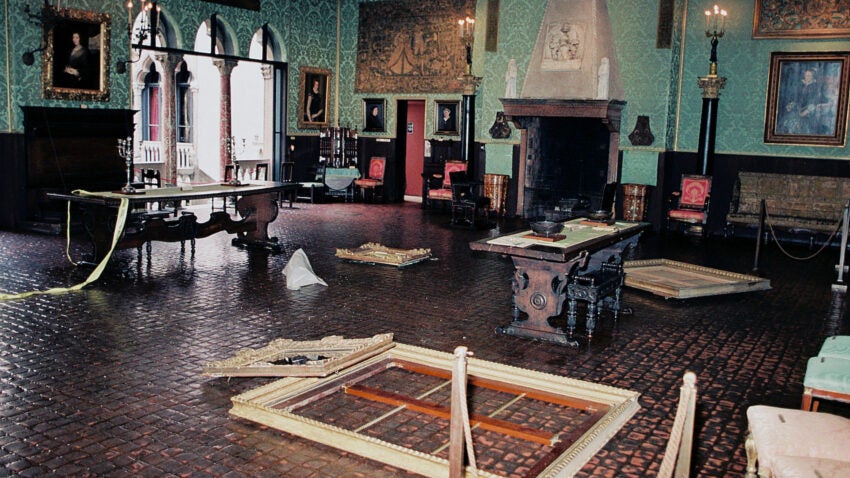 In the early hours of March 18, 1990, one of the world’s most lucrative artistic heists took place in Boston.

As revelers celebrated St. Patrick’s Day in the city, two men dressed as Boston police officers seized 13 works from the Isabella Stewart Gardner Museum worth a total of $ 500 million.

Among the stolen arts, there was Rembrandts The Storm on the Sea of ​​Galilee, the only seascape of Rembrandt in existence, and Vermeers The concert. To date, no arrests have been made and the art has never been found, despite the museum’s offer a reward of 10 million dollars for information leading to its recovery.

While Gardner’s story is more widely known in the Boston area, the theft will soon become familiar to a global audience thanks to This Is a Robbery: The Worlds Biggest Art Heist, a new Netflix docu-series that arrives on the platform Wednesday. streaming.

Directed by Colin Barnicle, This Is a Robbery is an episodic look at the entire saga, jumping back in time to come up with theories, identify suspects, and even show up at the courthouse as one of the heist suspects. out of prison more than a decade earlier than expected.

The story strikes close to home for Barnicle and his brother Nick, who co-produced the film: Growing up in the Boston area as the son of former Boston Globe columnist Mike Barnicle, Colin told Boston.com that when the brothers began to research the case, they continued to run into familiar names.

We read affidavits or court records, and some of the names were people we knew, Barnicle said. Whether it was lawyers or police or even some of the criminals we had encountered as my dad was touring Boston, writing columns while we were in the backseat. As anyone in the greater Boston area knows, the city operates like a small town. Everyone knows each other and you are to a degree from everyone.

In an interview with Boston.com, Barnicle spoke about the most surprising discoveries he made while researching the flight, the one person he wishes would have sat down for an interview, and why he hopes the docu- series will spark new avenues in long unsolved crime. .

This interview has been edited and condensed.

How long did it take to produce the docuseries, from the idea stage to the final product?

We started its research in 2014 and officially launched it that year. We started touring in 2016, and in 2017 we did a pilot and launched it everywhere. Luckily we landed at Netflix which was the right place. I won’t say the real crime genre caught up with it, but if we had been given the green light to do so in 2014, it probably wouldn’t have been so good.

What surprised you most when you started researching this documentary series?

The number of people we knew. We read affidavits or court records, and some of the names that came out were people we knew. Whether it was lawyers or police or even some of the criminals we had encountered as my dad was touring Boston, writing columns while we were in the backseat. As everyone in the greater Boston area knows, the city operates like a small town. Everyone knows each other and you are to a degree from everyone.

Second, what was surprising was the case itself that there were no arrests, there was no finding of evidence, no verdict for the case. There is literally nothing you can file freedom of information legislation on for this matter, because it never got to that level. Finding evidence around the case from the outside, looking inside, was new to us. How do you get files from a 1986 Suffolk County courthouse that aren’t scanned, you know? Things of this nature.

There must have been hours of footage on the cutting room floor. How did you decide on the priority among the four episodes to better tell this story?

I think we sat down in front of the camera with about 60 people, and only half of them are on the show. We wanted to make sure we had a four part series that had a story arc where someone from Des Moines, Iowa can watch it and someone from Boston can watch it and feel like they know just as much. on the case.

My brother and I were from the area, but the other producers weren’t, so we got married to them. For example, will people know where the museum is in relation to the South Boston Parade? Would they know that the parade always took place on a Sunday? We had to go into those kinds of details, but we also wanted to delve into the story to its essence.

Who is the one person you wish you could sit down with that didn’t agree to an interview?

Certainly Rick Abath, the guard on duty that night. I spent almost five years calling his lawyer every week. He answered very detailed questions via email and it seemed like he was okay with being interviewed after about three and a half years of working with him. And then something happened in August 2019, I don’t know what, but they backed off completely.

He was quite nervous about going in front of a camera again. I think because there have been two grand juries held on this subject in which he has been involved. Anytime he says something in the media that’s different from what he said in that grand jury, he’s fired.

The Gardner Museum still has a $ 10 million award for information leading to the recovery of stolen works. Do you think art will ever be found? And do you hope this documentary helps you?

I think if the docuseries don’t help, then they’re gone. Netflix literally has 500 million people subscribed to it. It’s like the biggest wanted poster in the world.

Hopefully this will turn out something loose, at least for some of the minor works. I know the Eagle finial, the least valuable of all works, was seen in Hartford or at least [authorities] think he was seen by an informant in Hartford, in a grease trap in [person of interest] Bobby Gentiles.

With odd jobs, they might be on someone’s wall, and you wouldn’t really know they were stolen. If you go to Grandma’s and she has [Rembrandts The Storm on the Sea of Galilee] on his wall, it’s a little harder to hide. But I think some of them exist for sure.