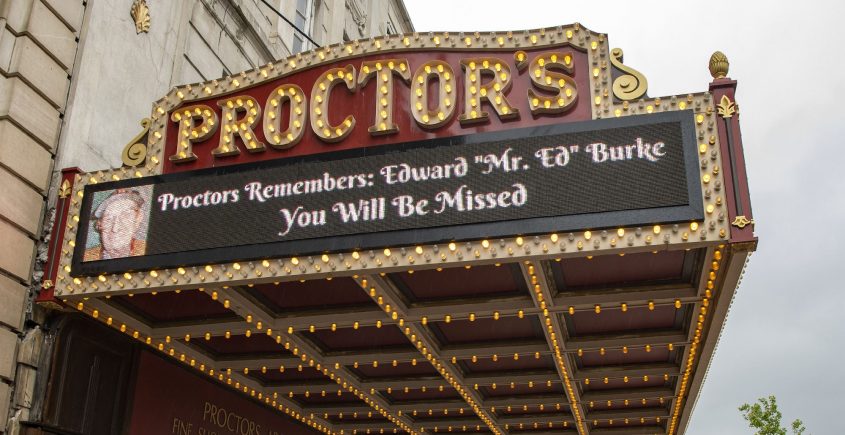 Edward Burke, a WWII veteran and longtime Proctors employee who died earlier this month at age 93, was known in the Schenectady Theater as the ultimate handyman.

During his tenure in the theater, which spanned more than three decades, Burke did everything from dismantling the seats in the theater to fixing the boilers to the heating system. Perhaps more than anything, he knew how to make things run smoothly.

Later in his career, Burke roamed the theater every shift, looking for anything that was wrong or needed fixing, according to Dan Sheehan, the theater’s director of operations.

It’s amazing how much he caught, Sheehan said.

Originally from Brooklyn, Burke volunteered to serve in the United States Navy during World War II and became a Seabee, according to his obituary. He then served in Japan and Korea during the Korean War. Subsequently, Burke worked as a toll collector with the New York State Thruway for 30 years before moving to Proctors, where he worked until the age of 92.

We firmly believe that working every day [right up until the pandemic closed the theater] gave him a purpose and kept him healthy and active. Until last February, he traveled to and from work every day, the Burkes family said in a statement.

One of his many jokes included, when I read the newspaper in the morning, if my name isn’t in the obituaries or among the lottery winners, then I guess I have to go to work today.

Burke’s second career at Proctors began after Dennis Madden, executive director of the theater during its revival in 1979, asked him to help raise the seats in the clothing circle.

This work led to many more, as Burke recounted in a 2013 video interview with Karen Johnson, filmed by the Proctors Historical Committee. Burke helped with the restoration work although he maintained his full-time job as a toll collector for a few years before working only at Proctors.

He used some of his Navy experience to figure out how to light the boilers in the heating system in theaters. He also dismantled each seat in the theater to be sent for upholstery and learned how to restore decorative plaster. In general, he was a jack of all trades and the theater’s head tinkerer, the Burkes family said.

According to Sheehan, Burke was one of the few people who knew how to clean and maintain the theatre’s scagliola, which is featured on the columns and in various places on the property. Experts from Evergreen Architectural Arts, the restoration company that worked with Proctors on several major projects, taught Burke how to maintain decorative plaster.

He was constantly cleaning the marble because decades of smoking actually tarnished the entire scagliola in the building, so you’re literally sanding the tobacco and scooping up the white, and he learned how to do that, which was very valuable. because it is something that is not done anymore. The skill set is disappearing, Sheehan said.

Proctors honored Burke on June 14 by posting a photo of Burkes and a post on the theater marquee that read, Proctors Remembers: Edward M. Ed Burke. We will miss you.

As the theater begins to open to the public again later this year, Sheehan said he is wary of doing so without Burkes’ expertise.

Were actually a little worried about what was going to be missing, after the drafting, Sheehan said.

There’s never been a job or project he wouldn’t tackle, whether it’s building a concrete mixer from aftermarket auto parts, building a patio next to our garage in New York. “Scotland or one of the hundreds of jobs he’s done at Proctors over the years,” said the Burke family. When they talk about The Greatest Generation, there is no better example than Ed Burke.