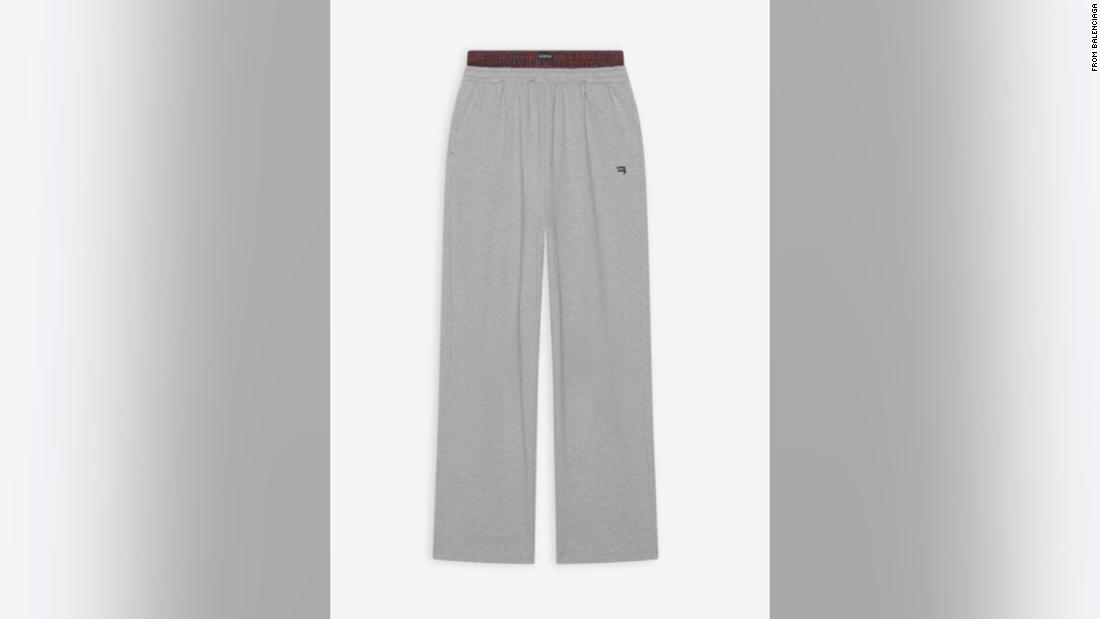 A prominent fashion designer behind a pair of $ 1,190 sweatpants has been slammed by some black fashion and history experts for what they say is cultural appropriation.

Grey Balenciaga jogging pants, which features what looks like the top of a boxer brief coming out of the belt, sparked controversy after a TikTok user posted a brief video of the pants on September 2 in what appeared to be a store.
“It sounds racist,” one individual said on the video posted by the Tiktok user. @ mr200m__ as they grabbed the Trompe-L’Oeil pants. “They woven the boxers inside the pants.”

Marquita Gammage, associate professor of African studies at California State University, Northridge, was also disturbed by Balenciaga’s article and what she sees as her exploitation of “black culture in the hope of profiting. important, ”she told CNN via email.

Gammage is the author of “Cultural Appropriation as ‘Agency Reduction'” which was published in the International Journal of Africana Studies in 2018. There she writes about the hijacking of black culture and how it undermines ingenuity, functionality and the beauty of the Negro. cultural expressions while simultaneously delegitimizing black experiences of injustice for capital gain, she said.

While saggy pants – which often involve jeans or sweatpants pulled down beyond the waist, with boxer underwear exposed above the waist – have been popularized in hip hop culture, the style has also “been used to criminalize black people, especially black men as thugs and a threat to American society,” Gammage said.

Balenciaga’s Trompe-L’Oeil Men’s Sweatpants in Red trigger immediate concern given the grotesque similarity to the iconic African-American hip-hop aesthetic worn by black Americans for decades that resulted in imprisonment and the deaths of black men, ”Gammage told CNN via email. “The pants have a commercial cultural appropriation written all over it; branded with Balenciaga’s name.”

Asked about the controversy caused by the Trompe-L’Oeil pants, Ludivine Pont, Marketing Director of Balenciaga, told CNN via email “in several of our collections, we combine different wardrobe pieces into one garment, like denim jeans layered sweatpants, cargo shorts fused with jeans and button down shirts layered over t-shirts. ”

“These Trompe L’Oeil pants were an extension of that vision,” she added.

Anthony Childs is just one tragic example of how sagging pants led to death.

On February 5, 2019, Childs was seen walking past a police car in Shreveport, Louisiana, holding his shorts slumped. He violated the city’s 2007 “drop pants” ordinance, The Washington Post reported. A violation could result in a fine of up to $ 100 and up to eight hours of community service, the Post added.

As Childs ran, a police officer followed, noting that the 31-year-old had a gun on him. The officer fired eight times, three of which hit Childs while he was on the ground, the Post reported. The coroner later said Childs died from a bullet to the chest.

In June 2019, following outrage over Childs’ death, “Shreveport City Council finally overturned this unconstitutional and discriminatory order,” Katie Schwartzmann, legal director of the American Civil Liberties Union of Louisiana, wrote at the time.
A similar drooping pants law in Opa-locka, Florida was repealed a year ago. The original 2007 city ordinance provided that men could receive civil citations for wearing loose pants with exposed underwear in city buildings and parks. In 2013, the law was expanded to include women and public spaces.

“The sagging dress has taken its toll on African Americans; yet companies like Balenciaga seek to capitalize on black and black cultural styles while failing to challenge the systematic racism that criminalizes black and black dress trends, ”Gammage said.

Jean is creative director and co-founder of We are made in Italy, a fashion and social awareness initiative that promotes the work of color designers.

“Black culture is so often sampled, but rarely cited. And beyond giving credit where credit lags, paying for those who have created and selflessly shared their genius, their creativity, their risk taking. and their innovation rarely, if ever, happens, ”says Jean. “In black culture there is something we call the“ black tax. ”It refers to the extra amount of effort, sweat, and nonsense that you will have to put in and endure to achieve even half the success that someone else with your talent and skill who happens to be white could reach. “

Who is tennis player Emma Raducanu, the 18-year-old winner of the US Open? : NPR